Yisrael Beitenu leader Avigdor Liberman had promised that he would not accept any other solution than a "liberal unity government," and so far, he has kept every last letter of that promise, even if driving all politicians crazy. 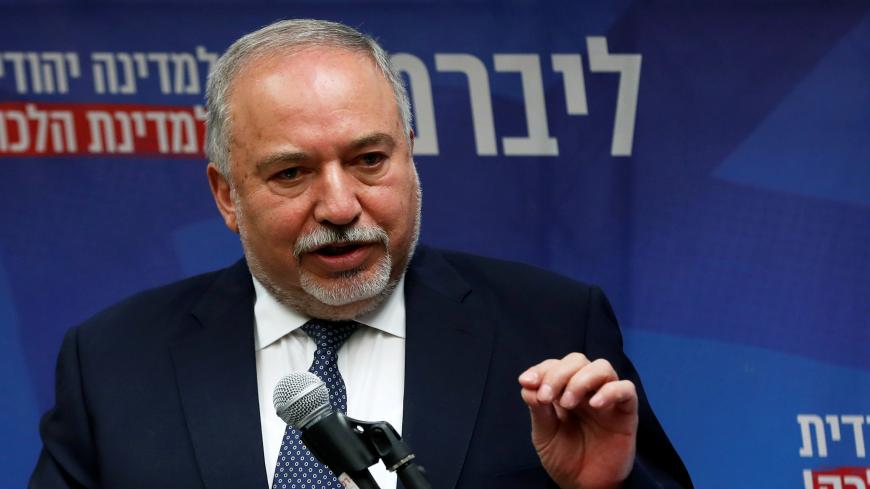 After a long promo and rising expectations, the perfect storm is finally upon us. On Nov. 20, Blue and White leader Benny Gantz returned his mandate to President Reuven Rivlin and became the third politician in all of Israel’s history who was unable to fulfill the task of forming a new government (the other two being Prime Minister Benjamin Netanyahu and leader of the defunct Kadima party Tzipi Livni). Israel is now closer than ever to an inconceivable downturn in its history, with a third election in less than a year. Meanwhile, the security situation is heating up — the air force launched an extensive attack against Syrian and Iranian targets on the night of Nov. 18-19 — and Attorney General Avichai Mandelblit is about to charge Netanyahu with assorted crimes. There is no solution in sight to the political situation, and there is no Israeli Alexander the Great to slice through this Gordian knot in a single blow to free Israel from this tailspin.

“As strange as it may seem, one of the people most responsible for Netanyahu’s troubles is head of the Hamas political bureau Ismail Haniyeh,” a senior figure in the Likud told Al-Monitor on condition of anonymity. His reasoning is quite simple: Just before he was appointed to be Netanyahu’s defense minister, Avigdor Liberman announced in May 2016 that if he was given the job, he would tell Haniyeh that he has 48 hours to return the bodies of Israel’s fallen soldiers and abducted citizens, or he will be assassinated. This promise followed Liberman around like an explosive boomerang from the moment he took the post. Haniyeh is alive and well, at least until now, while Liberman, whose brand was, “My word is my word,” found himself battered and humiliated by every outcast and misfit in the political system and on social media.

Since he resigned from his post as defense minister in November 2018, he has stood by his promises as firmly as a rock and has kept his every word. Liberman has managed to shift his image quickly so that he is now seen as, “Mr. My Word Is My Word” — at Netanyahu’s expense.

The entire political system held its breath Nov. 20, as it waited for 1:00 p.m., when Liberman was scheduled to announce the fates of Netanyahu and Gantz. Unlike so many assessments, he did not make a U-turn and return to Netanyahu’s embrace. He might even be said to have done the exact opposite of that. At the same time, he did not break left and make his way to Gantz. The cost of such a sharp turn was too much to bear, even for him. He could not allow the creation of a government with the votes of at least four Arab Knesset members, even if they only supported it from the outside. For the past few weeks, Liberman was under enormous pressure from both sides. He was torn between conflicting passions and ambitions. On the one hand, there was the loathing he had come to feel toward Netanyahu and the enormous efforts he had invested in freeing Israel from Netanyahu’s leadership. On the other hand, there was his historic and insurmountable revulsion for the Arab members of Knesset, whom he refers to as a “fifth column” every chance he gets.

In the end, Liberman decided not to decide. Instead he accused both sides — the Likud and the Blue and White party — of saying no to Rivlin’s outline for a new unity government. The ultimatum that Liberman gave the two parties expired on Wednesday afternoon, and he announced that both parties failed to meet his demands.

Given the current situation, Gantz was forced to return his mandate to form a government to the president. And today, the mandate is relayed to the Knesset. What this means is that, for the first time in its history, Israel is entering virgin territory. For the next 21 days, any member of Knesset can collect the signatures of another 60 Knesset members to form a new government. If that does not happen, the Knesset will be dissolved automatically in the second week of December, and elections will be held 90 days later, in early March. As the third election in just a year, this would cause unprecedented chaos. Adding the escalating security situation, the emerging economic crisis and the anticipated indictment of Netanyahu to this mix would result in a country in a tailspin, and a public that has lost all trust in its elected institutions.

History will judge Liberman, when the time comes. Meanwhile, he can enjoy one of the most creative and impressive comebacks in all of Israeli political history. It was just seven months ago, when he managed to eke his way into the Knesset — following the April elections — with just five seats. At the time, he was considered to be a political train wreck. Today, he is the most powerful politician in all of Israel. He decides who comes and who goes. He is the kingmaker and slayer of dragons. He decides what happens. He holds the keys to Netanyahu’s fate, and to the fate of the entire political system.

Hiding behind this madness is a formalized ideology. Liberman insists on the formation of a “liberal unity government,” without sectorial parties, without the ultra-Orthodox and without the Arab members of Knesset. He has promised that he would not accept any other solution, and so far, he has kept every last letter of that promise.

True, he has managed to drive the political system crazy on his way to achieving that. The generals in the Blue and White party — three out of the four leaders of the party, Gantz, Moshe Ya’alon and Gabi Ashkenazi, are former Israel Defense Forces generals and chiefs of staff — invested an interminable amount of energy in him over the past few weeks. If we can sit in a government supported by the Arab Knesset members, so can you, they told him. No, I can’t, he responded. This resulted in enormous outrage against him among the Blue and White party leadership, but those former chiefs of staff were forced to bite their tongues. They continued to shower him with respect, so that he would not turn on them, too.

“If he would have examined the situation in-depth, he would have realized that the only person to tell him, 'No,' was Netanyahu,” one member of the Blue and White cockpit told Al-Monitor on condition of anonymity. “After all, he is well acquainted with Netanyahu, so he knows that Netanyahu never planned for a minute to declare his incapacity, as the president suggested in his outline for a new government. Unfortunately for us, Liberman preferred to take the easy way out. He lacked the courage to assume responsibility and make the kind of difficult decision that would put an end to the Netanyahu era.”

Liberman himself is not at all moved by this. He is one of the most coldblooded politicians ever to have served in Israel. According to a political source, speaking on condition of anonymity, Liberman said Nov. 20, “I hope that it will still be possible to form a unity government in the 21 days left, but there is not much chance of that happening. Still, as long as there is a chance, I will keep trying. If not, we will be forced to go to elections.”

After all that, we cannot forget that Israel is a crazy country, where everything can change overnight. A security crisis could reboot the entire situation, and send the rival parties running into each other’s arms. Indictments could ignite a semi-rebellion in the Likud. None of the players will sit back and relax until the very last moment of the 21st day. Only then will the countdown to the next round of elections, scheduled for March 2020, really begin.