The Israeli security system is trying to head off a nightmare as the coronavirus menaces the uniquely vulnerable Gaza Strip. 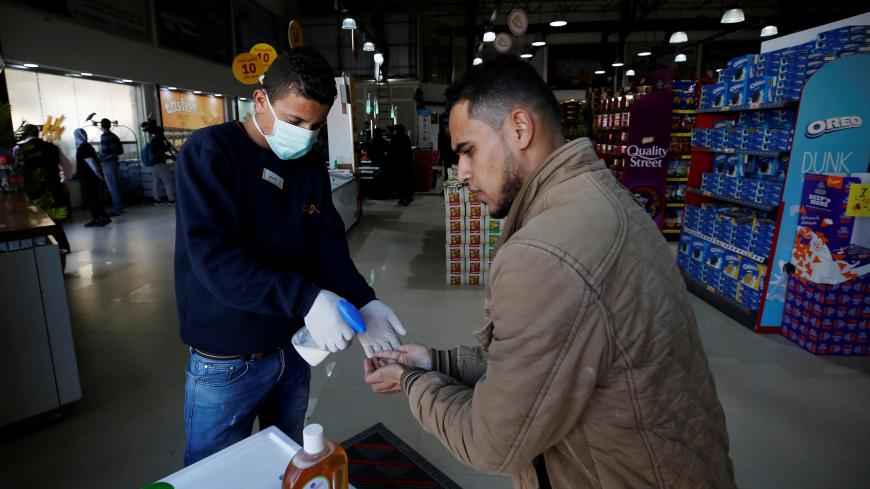 A Palestinian worker wearing a mask sanitizes the hands of a customer as part of coronavirus precautions in a supermarket, Gaza City, Gaza, March 8, 2020. - REUTERS/Mohammed Salem

Israel’s Coordinator of Government Activities in the Territories (COGAT) sent about 200 coronavirus testing kits to the Gaza Strip March 13. The kits crossed via the Erez passage under the orders of Defense Minister Naftali Bennett, who now seems to understand that Israel is responsible for Gaza, even if he prefers not to recognize that reality publicly. The office of COGAT head Maj. Gen. Kamil Abu Rokon announced, “Viruses and illnesses have no borders — therefore, it is in Israel’s best interests to prevent the spread of the coronavirus in the Gaza Strip and its outbreak in the territories of Judea and Samaria. This is in Israel’s interests because such an outbreak may well endanger the health of the residents of State of Israel as well.”

One kit for every 10,000 residents seems a symbolic gesture. We can assume that it was intended to pressure Hamas to take action to prevent a catastrophe in the Strip, which is also in Israel's interests. Should the virus explode in the Strip, it will certainly spread to Israel. The Gaza Strip is one of the most crowded and poverty-stricken places in the world and an outbreak there could be deadly. Its health system is already collapsing even without the coronavirus. In light of the living conditions in the Strip, which has been under a strict closure for 13 years, it is doubtful that quarantine measures could be imposed.

At this stage, not one instance of coronavirus has been found among Gaza's residents, who say it's is the first time that something good has come out of the closure that blocks the virus at Gaza's gates.

But while it is true that no coronavirus cases have been found in Gaza yet, that absence means little as testing kits are so few and far between. According to various reports from the Strip, there are people who complain about symptoms that are typical of the virus but are not being tested. Hundreds of pilgrims have been returning from Mecca to the Strip, as well as thousands of laborers who worked in Israel until last week. It is very possible that some of them carry the virus and are now infecting others in the Strip. Prior to Israel’s Purim holiday on March 10, Defense Minister Naftali Bennett tightened the closure on the Gaza Strip in a security measure that was supposed to last three days, but the restrictions have not yet loosened.

Now for the first time, the Gaza blockade is functioning less to protect Israeli citizens from potential terror attacks than to protect the Palestinian workers. Their contact with Israelis, more than 300 of whom were diagnosed with the virus as of March 17, could bring the disease into the Strip. The closure on Gaza and the West Bank has caused great distress among Israeli farmers, who demanded that the defense minister exempt the agricultural sector and the workers it depends on. Bennett rejected the request out of hand.

The Israel defense system is very concerned about the spread of the coronavirus in the Strip. Should even one resident in Gaza be infected, the virus could spread rapidly throughout the population. Israel itself is now coping with a rising number of coronavirus patients and would probably not be able to help the Palestinians: not with testing, not with hospitalization in Israel, not with providing life-support ventilators or other medical equipment — not even humanitarian assistance.

To avert catastrophe, Bennett — who had long argued before he became defense minister that the Hamas regime should be brought down — is now permitting COGAT to visibly if indirectly coordinate with the Hamas administration.

Ynet reported March 15 that COGAT has allowed the Strip to import commercial quantities of cement, one of the raw materials not permitted to enter Gaza for fear it would be used to construct tunnels and bunkers. In January, the arrangement talks led to approval for cement to be brought in to the Strip to help jump-start employment in Gaza's construction industry, but the changes were never implemented because of the security escalation with Hamas and Islamic Jihad.

But cement alone will not be enough to significantly alleviate Gaza's economic distress. The closure has lasted for 13 years and only recently have Gaza residents begun to believe that an arrangement with Israel will give them some breathing space. Now the defense system faces both the epidemic and a worsening economic-humanitarian situation in Gaza, a truly thorny dilemma.

The Israeli economy is now approaching a state of emergency. Should Israel’s economy shut down almost completely, with its borders and international trade closed, Gaza and its residents will be directly affected.

According to an Israeli defense source who talked to Al-Monitor, Israel is making a tremendous effort to transfer goods to Gaza via Kerem Shalom including basic foodstuffs, basic hygiene materials and equipment for factories and small businesses. But it is not clear whether Israel will continue to allow imports into Gaza via the Kerem Shalom border crossing a few weeks from now. If the current crisis continues and worsens over the coming months, then Israel will certainly disallow imports into Gaza. How sad it is that when Israel finally opened the border crossings to laborers and merchants, along came an enemy of different stripes that returned Gaza to the harsh days of lockdown. True, the closure is for Gazans' protection, but a closure is a closure.