Egyptian intelligence has contacted Hamas and Islamic Jihad in Gaza to prevent a military confrontation with Israel over the growing coronavirus threat. 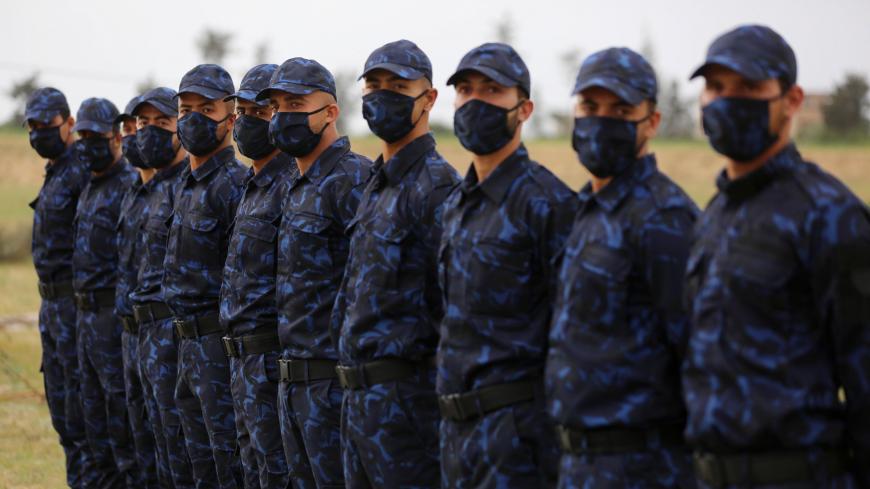 The parliamentarian, who is close to Egyptian intelligence, told Al-Monitor on condition of anonymity, “Egyptian calls to the leaderships of Hamas and Islamic Jihad to contain the situation came after Egyptian intelligence received calls from Israeli officials to stop the two movements from carrying out military actions against Israel to pressure it into allowing the entry of anti-coronavirus medical tools.”

The source added that the Egyptian intelligence command asked Israel to allow the entry of necessary medical provisions into the Gaza Strip without restrictions, and "Israel has responded positively to this request.”

Gaza Strip Ministry of Health spokesperson Ashraf al-Qidra said in a news briefing April 8, “Testing at our central laboratory has stopped after coronavirus test kits completely ran out.” He added that dozens of samples are still waiting to be tested. The ministry so far has recorded 13 coronavirus cases, he said; eight of the patients had recovered while the remaining five were still under treatment.

On April 5, Islamic Jihad Secretary-General Ziyad Al-Nakhaleh threatened to fire rockets at Israel if the shortage of equipment to fight the coronavirus persists. Nakhaleh said in a statement published in local media outlets, “Because death knocks on everyone's doors mercilessly (referring to the coronavirus outbreak), we will not die alone. … The enemy (Israel) must choose between [taking shelter and subsequent] consequences or lifting the blockade [imposed on the Gaza Strip since 2007].”

Yahya Sinwar, Hamas' leader in the Gaza Strip, told Al-Aqsa satellite channel April 2, “If coronavirus patients in Gaza can't breathe, we will take away the breath of 6 million Israelis, and we will get what we want by force.”

Sinwar and Nakhaleh’s comments came in response to the April 1 statements of Israeli Defense Minister Naftali Bennett linking the provision of coronavirus aid to the condition that Hamas hands over two missing Israeli soldiers that Israel believes were captured or killed during the 2014 war on the Gaza Strip.

On March 18, Israel allowed hundreds of coronavirus testing kits into the Gaza Strip, as well as medical preventive equipment, through the Erez crossing. That move came at the request of the World Health Organization (WHO). But since then, no new medical equipment has entered Gaza from Israel.

The parliamentarian pointed out that the Egyptian calls with Hamas and Islamic Jihad leaders persuaded the factions not to carry out any military activities against Israel, and to trust Egypt's diplomatic mediation to solve the problem.

The source further indicated that Egyptian intelligence promised both movements that it would not allow a health crisis to occur in the Gaza Strip, whether by pressuring Israel to pass through the medical supplies or by sending medical aid directly.

On March 26, Egypt sent an emergency medical and humanitarian aid convoy to the Gaza Strip through the Rafah crossing.

Talal Okal, a political analyst and writer for the Palestinian newspaper Al-Ayyam, told Al-Monitor, “Egypt is working on avoiding a health crisis in the Gaza Strip because it wants to prevent the outbreak of a military confrontation between Gaza and Israel, in addition to protecting its eastern borders with the Gaza Strip from security or health complications. Such troubles would negatively affect Egypt's health situation, which has already taken a dangerous turn in the past few days due to the coronavirus outbreak.”

Ahmed Rafiq Awad, a media and political science professor at Al-Quds University in Abu Dis, told Al-Monitor, “I think that Israel, which is also facing a real crisis due to the outbreak of the coronavirus, would not want to create a health crisis in the Gaza Strip or the West Bank. But it believes the Palestinian Authority (PA), not the Israeli government, is responsible for the Gaza Strip."

On March 22, Israel released 120 million shekels ($33.6 million) in Palestinian tax money to the PA for emergency use against the coronavirus in the West Bank and Gaza Strip.

Israel said it also will allow the establishment of a 300-square-meter (3,229-square-foot) emergency laboratory in Gaza to conduct 3,000 coronavirus tests daily. The lab will be supervised by Beijing Genomics Institute (BGI) and Israel's AID Genomics, both specializing in medical and biotechnological techniques, and will be funded by international donations.

Gaza Strip Ministry of Health Undersecretary Youssef Abu al-Rish told Al-Monitor the ministry welcomes the move to build this laboratory, which is expected to be equipped by April 16, but he said it is “an insufficient step that does not replace the provision of lab test kits to detect the virus in the Gaza Strip hospitals.”

Abu al-Rish added, “Since the beginning of the quarantine procedures in the Gaza Strip on Feb. 16, we have completed 2,000 laboratory tests for citizens. But we have run out of testing kits, and we run the risk of the spread of the virus in the Gaza Strip.”

He stated that the PA “is not giving the health sector in Gaza enough attention and is focusing its efforts on fighting the virus in the West Bank, which reflects the Palestinian rift.” The Gaza Strip only received 1,500 test swabs, worth $4,000, from the PA, he said. “Although the PA has been ignoring the suffering health sector in Gaza, we believe Israel is the most responsible due to its 14-year siege on the Gaza Strip,” he added.

Meanwhile, Kamal al-Shakhra, director-general of primary care at the PA's Ministry of Health, said in an April 7 press conference in Ramallah, “We have not received any official request from Gaza to fulfill the required quantities of testing kits.”