Not everyone in Israel, especially in the defense establishment, is enthusiastic about cooperating with a large China company in the battle against the coronavirus. 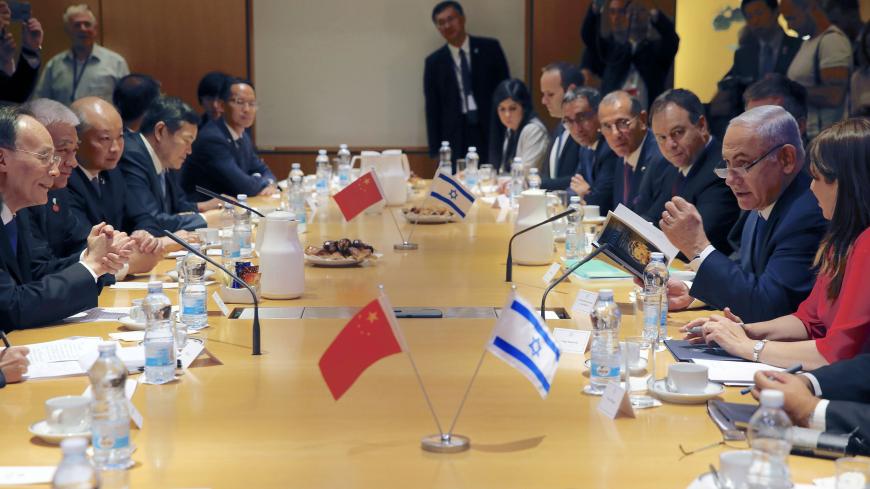 Israelis have not yet seen an increase in coronavirus testing in any significant way despite repeated promises from Prime Minister Benjamin Netanyahu and the heads of Israel's health care system. Testing certainly hasn’t reached the numbers that the prime minister spoke about only three weeks ago, when he aimed for 20,000 and as many as 30,000 tests a day.

Apparently, Netanyahu was basing his numbers on the expectation that Israel would begin cooperating with the Chinese firm BGI by early April. BGI and its subsidiaries together comprise the largest DNA and genetics company in the world. The problem is that the road to real cooperation with the Chinese behemoth was strewn with obstacles. Chief among them was sharp criticism from senior figures in the defense establishment and specialists in Israel and around the world, who expressed concerns that cooperation of this kind would require exposing sensitive Israeli databases to the Chinese corporation.

Such security considerations existed long before any deal with BGI, and there was nothing new about US pressure on Israel to roll back its budding relationship with Beijing. This time, however, there were other considerations, in particular concerning the country’s image and depending exclusively on Chinese supply lines. Will the age of the coronavirus affect the close relationship that Israel and China have developed over the past decade the way it appears to have affected China’s relations with Europe?

Indeed, Israel confronts tough choices. The government had been in talks with BGI and its partners since late March to build a huge lab to conduct coronavirus testing and to acquire the equipment needed to run thousands of tests a day. Participants in the talks included the Mossad director, Yossi Cohen, as well as representatives from the Defense, Foreign Affairs and Health Ministries.

The Health Ministry had initially signed an informal memorandum of understanding with My Heritage, a genealogy company that does DNA testing and helps develop family trees. The plan was to have it create a large laboratory that would focus on coronavirus testing in conjunction with BGI. Many in the defense establishment, however, expressed deep consternation, arguing that it would infringe on Israeli citizens' privacy rights and provide sensitive personal information to the Chinese firm, which has close ties to the Beijing government. As a result, the understandings reached with My Heritage were put on hold. Negotiations then began with BGI’s Israeli partner, Aid Genomics, instead.

Meanwhile, Maj. Gen. Yohanan Locker (res.), general manager of the Klalit Health Insurance Company, one of Israel's three largest insurers, announced that he would not work with BGI, objecting to BGI gaining access to his firm's databases and other sensitive information about its clients. Regardless, the Health Ministry continued to be criticized for failing to conduct adequate testing, and because of the pressure, it eventually signed a contract with Aid Genomics and BGI. On April 19, Foreign Minister Yisrael Katz announced that the first shipment of coronavirus test kits would be arriving in Israel the following week.

The chain of events is fascinating given all the twists and turns and genuine concerns about cooperating with an enormous Chinese corporation. Not only does it reveal a lack of consensus within the Israeli leadership, it also offers a glimpse into the future. In this case, public health considerations outweighed privacy concerns, but lively debate and sharp criticism of Israeli collaboration with China now and in the future are more intense than ever, accompanied by US pressure, privacy issues and fear of developing dependencies on Chinese industry.

Tommy Steiner, a senior research associate at the Institute for Policy and Strategy at the Interdisciplinary Center Herzliya, told Al-Monitor that many in Israel are nervous about sensitive information getting into the hands of Chinese companies, regardless of whether the firms are private or government owned.

“Our relationship with China is likely to cool off in the mid- and long term,” Steiner said. “This is mostly because of the US, but not only. I don’t foresee any easing of the relationship between the US and China in the future. Actually, the coronavirus provides the rationale for this. You can’t rely on manufacturing lines in a single place. Countries are worried about depending on a geographically long supply line. That is the trend.”

Julia Schulman, senior director of special projects at the American Foundation for Defense of Democracies, told Al-Monitor that Israel has a real opportunity to recognize just how vulnerable it has become and how reliant it is on Chinese companies. It is only with that kind of information that it can change course.

“The coronavirus outbreak should be a wake-up call to Israel,” Schulman remarked. “The virus revealed how Israel and the international community are dependent on China as a global exporter. According to some sources, China controls some 15% of the Israeli economy. Today, Israel lacks medical equipment, but it also has a shortage of eggs and butter. The Bright Food Group, which is owned by the Chinese government, owns 56% of Tnuva, once Israel’s largest food processing cooperatives, specializing in eggs and dairy products. The pandemic should encourage Israel to diversify its trade partnerships and open up to countries like India and Singapore. This is an ideal time for Israel to bolster its own version of the American Committee on Foreign Investment.”

Israeli-Chinese relations involve technology, infrastructure and universities. Bilateral economic ties have been increasing steadily over the last few years. China has invested vast amounts in Israeli infrastructure projects and has been a partner in important national initiatives, such as construction of the Red Line (the first stretch of a light rail line going from Petah Tikvah to Tel Aviv), operations in the Haifa Bay port, construction of the port in Ashdod, excavation of the Carmel Tunnels and dozens of other projects.

Meanwhile, China imports so much technology from Israel to the extent that the level of cooperation upsets the Americans. In 2019, for instance, the United States demanded, with accompanying threats, that Israel place tighter controls on its technology sales to China. It was only then that the government formed a committee to restrict Chinese investments in Israel. Opposition Knesset members and cybertechnology experts had been recommending such a step for years.

Nonetheless, China continues its vigorous policy of promoting cooperation with Israel. In May 2019, it signed an agreement with the city of Ashdod to participate in Beijing's Belt and Road Initiative. As part of the project, China made a commitment to construct two trade towers in Ashdod, a large logistics center in the rear section of the port, a light rail system and an academic institute through which Israeli and Chinese universities would cooperate.

Many Israeli experts have been critical of the privatization of Israel’s ports, including at Ashdod, arguing that it poses an existential threat to Israel’s security. Others have attempted to dismiss these concerns, going so far as to hurl accusations of Sinophobia.

In the age of the coronavirus, even the most enthusiastic proponents of economic cooperation with China will need to weigh the opportunities against the risks as exposed during the current crisis. Given the growing tensions between the United States and China, Israel should be expected to align with Washington and show greater caution in its dealings with Chinese firms, especially when strategic national infrastructure and sensitive technologies are at stake.