The Biden administration is relaying to Jerusalem the same fears expressed by former US administrations over Chinese investments in Israel. 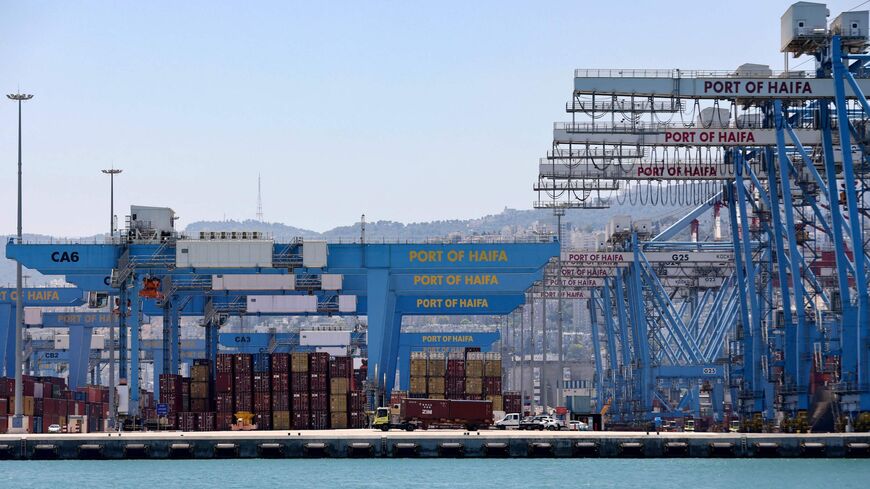 This picture shows containers and cranes on a dock of the northern Israeli city of Haifa port, on June 24, 2021. - EMMANUEL DUNAND/AFP via Getty Images

Israel's first private port opened Sept. 1. Operated by the government-run Chinese company SIPG, this project and the growing Chinese involvement in the Israeli economy are a point of dispute with the American administration. The US administration reportedly opposes this move. One of the warnings raised was that the US Navy’s Sixth Fleet, which sometimes docks at the port of Haifa, would be vulnerable to Chinese bugging and surveillance. A study by the American Rand Corporation on Israel-China relations says that a permanent Chinese presence at the Haifa port would provide a unique opportunity to collect intelligence and conduct cyberwarfare. The report quotes former US Chief of Naval Operations Gary Roughead as saying in 2018, "The Chinese port operator will be able to monitor closely US ship movements" and "Significantly, the information systems and new infrastructure integral to the ports and the likelihood of information and electronic surveillance systems jeopardize US information and cybersecurity."

In 2018 Haaretz reported that according to a senior White House official, the Pentagon, the Treasury Department and Vice President Mike Pence’s office were boiling mad when they heard about the cooperation between Israel and China in building ports in the country. In 2019 John Bolton, then the American national security adviser, visited Israel and raised Washington’s concerns at China’s growing involvement in building important infrastructure in Israel, including the port.

The subject also reportedly came up at President Joe Biden’s meeting with Prime Minister Naftali Bennett Aug. 27, but according to an Israeli diplomatic source who spoke with Al-Monitor, was not discussed to the extent that Israel expected. According to him, there was no real American pressure on the issue and Bennett merely promised to closely and thoroughly examine Chinese investments in Israel.

American opposition to Chinese involvement in Israel has grown since Chinese companies took on several infrastructure projects, including building the light rail in the center of the country. There will now be a bid for operating an additional three lines and among the bidders are Chinese companies controlled by the Chinese government, so that there is a high likelihood that at least one of the lines will be run by a Chinese company.

The economic ties between Israel and China have greatly strengthened in the past decade and received a push from a 2014 government decision that removed roadblocks and advanced technological and other cooperation agreements with China. Former Prime Minister Benjamin Netanyahu met in Beijing with Chinese President Xi Jinping in 2017 and hosted his vice president Wang Qishan in Jerusalem in 2018.

In early August, it was reported that an extension of the Chinese University of International Business and Economics is to open in Petach Tikva.

Doron Ella, who studies China at the Institute for National Security Studies at Tel Aviv University, told Al-Monitor that Chinese investments stand at a little less than 10% of the foreign capital invested in Israel, far from the levels of investment of the United States and Europe. However, the chief American concern is with Chinese investments in the fields of technology that are considered sensitive.

Ella notes that the rivalry between China and the United States, which greatly intensified in the Trump era, brought pressure on Israel from elements of the administration and warnings that the Sixth Fleet would stop docking at the port of Haifa because of the Chinese control over the new adjacent port. Israel denied an American demand to establish a technology security check at the new port to ensure it has no surveillance equipment, reassuring the Americans that it knows how to monitor and prevent such surveillance.

The Americans are concerned with investments in high tech as well. A few years ago, the United States asked Israel to develop a mechanism to oversee foreign investments and the Israeli government did create one in 2020. Still, it seems to lack real authority.

Ella says that American pressure has had a cooling effect on Chinese investments in Israel, which have decreased a bit in the past two years along with other such investments across the world amid the coronavirus pandemic. He notes that alongside Chinese financial investments, on the diplomatic level China backs Israel’s enemies, foremost among them Iran, which has excellent ties with China. It purchases much of its oil from China, circumventing American sanctions.

When it comes to construction and housing projects, the Americans have found an ally with the Israel Builders Association, which opposes awarding large housing and infrastructure bids to Chinese companies. In recent months, representatives of the Israeli association met with US officials and asked the Americans to press Israel to decrease Chinese involvement in such projects. The association points to the Chinese companies’ extremely low bids that entail a certain loss as a clear sign that their motivation is not profit but other interests.

Raul Srugo, president of the Israel Builders Association, told Al-Monitor, “The Chinese activity in the construction and infrastructure fields in Israel stands in opposition to the declared position of the United States, thus we expect that Israel’s government will wisely choose to protect local knowledge and production in preferring it over these companies.” The association published an ad in the Jerusalem Post saying that the time has come to stop the Chinese takeover of infrastructure in Israel and to work with the American position on this issue.

The spokesperson of the Chinese Embassy in Israel, Wang Yongjun, wrote in a response opinion piece for the Jerusalem Post that Israel must not take a side in his country’s conflict with the Americans. “China is firmly opposed to the cold war mentality,” he wrote. He wrote that China greatly respects Israel and its independence in all fields. He denied the claims of surveillance and Chinese cyberattacks on Israel and accused the Americans of spreading tales against China.

What plays to the benefit of the new Israeli government is the Biden administration’s lack of willingness to confront because it has an interest in its stability. However, the Americans repeatedly clarify that Israel should reduce Chinese involvement in its infrastructure and increase supervision of Chinese involvement in Israeli technology companies.

China in the Mideast
Cybersecurity
Economy and trade