US pressures Israel on trade with China

Washington is calling on Israel to change the way it monitors foreign investments in Israel, and Israel is likely to take appeasing measures. 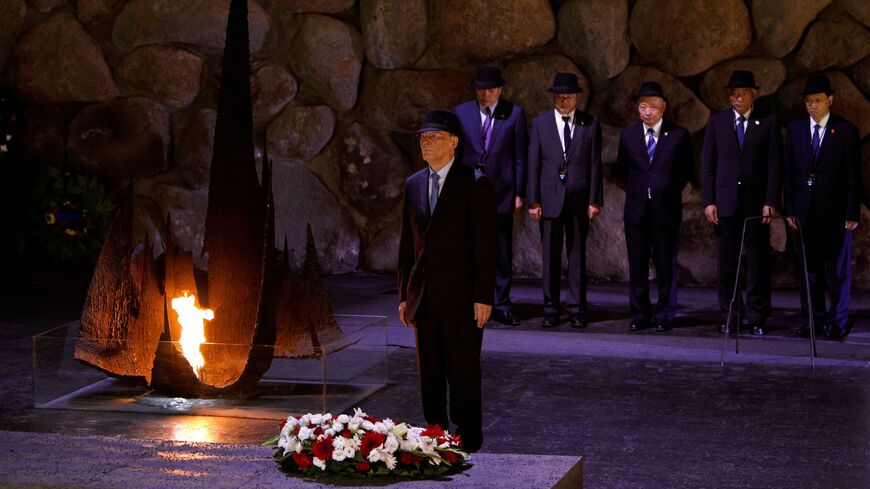 Chinese Vice President Wang Qishan lays a wreath at the Hall of Remembrance on Oct. 24, 2018, during his visit to the Yad Vashem Holocaust Memorial museum in Jerusalem. - GALI TIBBON/AFP via Getty Images

American pressure to weaken China's access to sensitive Israeli technologies and infrastructure has increased. Israel’s new government under Prime Minister Naftali Bennett and Foreign Minister Yair Lapid is making certain changes, but perhaps not at the pace or the extent the Americans demand.

The issue arose during Bennett’s Aug. 27 meeting with President Joe Biden as well as during Lapid’s visit to Washington in mid-October, though the topic did not feature in the press releases afterward.

Eyal Hulata, as national security adviser and head of the National Security Council, holds many conversations with the Americans and Israel's ties to China arise often.

Economic ties between Israel and China have strengthened greatly over the last decade. They got a boost from the Israeli government’s decision in 2014 to remove several administrative obstructions and promote technological cooperation agreements with China. Netanyahu met with Chinese President Xi Jinping in 2017 and hosted Chinese Vice President Wang Qishan in Israel in 2018.

Brig.-Gen. (Res.) Assaf Orion is a senior research fellow at the Institute of National Security Studies and director of its research program on Israel-China relations. Orion claims that the new government is changing Israeli policy on China after more than a decade of former Prime Minister Benjamin Netanyahu encouraging China's entry to the Israeli market despite American urgings of caution.

The Biden administration has sharpened its tone versus the Chinese and some senior officials consider Chinese policies and regional influence a strategic threat.

American opposition to Chinese involvement in Israel intensified in recent years after Israel allowed Chinese companies to participate in infrastructure projects, including building the foundations of the light rail in the center of Israel. Now Israel is preparing to hold a tender for three additional train lines. Among the groups expected to bid on this tender are three consortiums that include Chinese companies. One of these companies is not allowed to take part in American tenders because of its links to China’s security industry.

Another example of Chinese investment in sensitive Israeli infrastructure is the new port in Haifa. This past September, a private port in Haifa built and operated by a Chinese company opened for business. This project became a controversial issue between Israel and the American administration. A study by the American Rand Corporation on Israel-China relations warned that a permanent Chinese presence at the port would provide China with opportunities to collect intelligence. The report quoted former US Chief of Naval Operations Gary Roughead as saying, "The Chinese port operator will be able to monitor closely US ship movements" and "Significantly, the information systems and new infrastructure integral to the ports and the likelihood of information and electronic surveillance systems jeopardize US information and cybersecurity."

Doron Ella researches China at the Institute for National Security Studies and Tel Aviv University. Ella says that the Chinese investments make up a bit less than 10% of the total foreign capital invested in Israel, far less than US and European investments. Nevertheless, the Americans seem to be highly concerned about Chinese investments in security-sensitive technologies no matter the size of the deals or the money involved.

The administration in Washington is calling on Israel to change the way it monitors foreign investments in Israel. This mechanism, a committee, was founded due to American demands, but is virtually toothless. Now Israel is examining whether to move the committee to the National Security Council.

Israel is confronted with challenges on China not just on the security trade level, but also in the diplomatic sphere. In a rare move last June, and reportedly after US pressure, Israel joined some 40 countries in urging China to allow independent observers access to its western Xinjiang region, where Beijing is accused of a brutal crackdown on the Muslim Uyghur minority.

In discussions in Israel’s Foreign Ministry prior to the move, some diplomats expressed concerns over China's reaction. The issue was then escalated to Foreign Minister Yair Lapid, who decided to follow the Americans and condemn China, though the Foreign Ministry kept a low profile and did not publicize Israel’s stance on the issue. After Israel notified China about its decision to support the statement, Beijing issued a diplomatic statement of protest.

On the other hand, Israel refrained from signing an Oct. 24 joint statement at the United Nations, initiated by France, that expressed concern over Beijing’s treatment of the Uighur minority.

Israel’s diplomacy on China is shaped by more than US pressure against Chinese investments and Jerusalem’s desire to foster economic ties. There are also Beijing's policies on Iran and on the Israeli-Palestinian conflict to consider, as well as the global perception of China on human rights.

In March this year, Beijing signed a strategic economic agreement with Tehran, sanctions on which Beijing has always opposed. Last May, during a round of fighting against Hamas in the Gaza Strip, Chinese Foreign Minister Wang Yi spoke out against Israel using unusually harsh language.

Clearly there is tension between Israel and the United States over Chinese influence. But Israel enjoys a much stronger alliance with the United States that includes diplomacy, security and economic aspects. If Israel is forced to choose between the two, it will clearly choose the United States. Especially now with tensions growing between Jerusalem and Washington on other issues, Israel is likely to remain aligned with its closest ally.

China in the Mideast
Cybersecurity
Technology