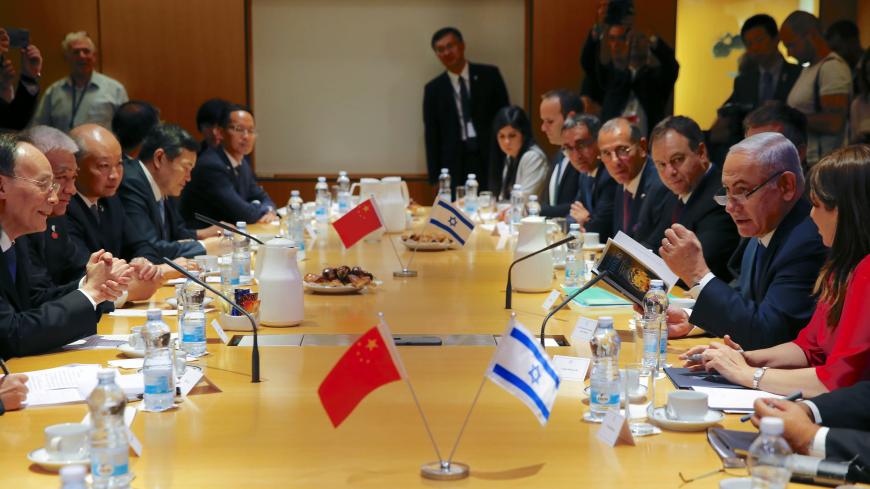 Comments made this week by Nadav Argaman, head of the Shin Bet, set off two storms that got Israel in trouble with two world superpowers — Russia and China. At a closed-door meeting on Jan. 8, Argaman said that “a foreign state” intends to “meddle” in the April 9 elections using hackers and cybertechnology. Argaman insisted he knew this for a fact, although he did not know “which side” the meddling was supposed to benefit. The Russians were quick to deny any involvement in the upcoming elections or in any other election campaign.

Appearing the following day before another closed-door forum, Argaman spoke of China’s involvement in Israel, warning that its massive economic investments could pose a threat to state security. “The Chinese influence in Israel is particularly dangerous,” Argaman said, according to Channel 10 News, “especially as it concerns investment in strategic infrastructure and in major companies.” Argaman was likely referring to the Chinese companies contracted to build a new Mediterranean port in the northern city of Haifa and a light rail system in Tel Aviv; its acquisition of Israel’s largest food manufacturer, Tnuva, by Chinese Bright Food company; and its interest in buying major Israeli insurers. The Shin Bet chief argued in favor of legislation to oversee the Chinese investments in Israel. “The law is lagging behind in terms of foreign investment oversight. This could be dangerous,” he reportedly said.

Israelis are not the only ones concerned about China’s growing involvement in mega investments in Israel. The US administration is not wild about this turn of events and is monitoring it closely. US national security adviser John Bolton raised the issue with Prime Minister Benjamin Netanyahu and other top officials with whom he met in Israel earlier this month. Bolton reportedly demanded that Netanyahu tighten his government’s oversight of the Chinese firms operating in Israel to foil any espionage activity. Behind the scenes, US criticism of Chinese telecom companies such as Huawei and ZTE is far harsher, with an Israeli security source describing it (on condition of anonymity) as “really furious.” In meetings with their Israeli counterparts, US defense officials repeatedly raise the issue, arguing that China should not be building Israel’s major ports and large infrastructure projects. The Americans have even hinted at the unpleasant prospect of the US 6th Fleet boycotting Chinese-built ports.

Israel views China as having a well laid-out economic expansion plan, but it does not attribute any malicious intent to the Chinese. The Americans, on the other hand, are engaged in a real economic war with China, which they regard as an immediate threat to the US economy and its global hegemony. Israel finds itself torn between these two poles. On the one hand, it values the immense Chinese economic might oiling the wheels of the Israeli economy. On the other, the United States under President Donald Trump sees any link with the Chinese as an act verging on treason. Officials in Jerusalem do not dismiss the idea that the determined US refusal to allow Israeli sales of upgraded used F-16 fighter jets from its fleet to Croatia is a type of initial “retaliatory move” that will not necessarily be the last, against the accelerated tightening of Israel-China economic ties. Israeli defense officials fear that this is the trailer to a bad movie under production.

The issue is not merely economic. It also has defense aspects that are far more troubling. Israel has been preaching to the world that it must sever commercial and economic ties with Iran and boycott companies that fail to do so. Netanyahu was the one who led Trump to renew and intensify US sanctions on firms trading with Iran. It now turns out that Israel itself is not very careful about keeping the sanctions. The giant Chinese infrastructure group CRRC Changchun Railway Vehicle that won the supply and maintenance tender for the Tel Aviv light rail maintains widespread contacts with Iran and supplies the cars for its metro rail lines in Tehran and Isfahan. The Chinese firm openly ignores the US sanctions, and it even signed deals with Iran from which European firms adhering to the sanctions dropped out. Iran’s Foreign Minister Mohammad Javad Zarif was even present at the signing of one of the deals between the Chinese and Iran. Nonetheless, Israel continues to give the Chinese firm free rein, allowing CRRC to compete in another major light rail bid — this one in Jerusalem.

Israel understands that it cannot play both sides forever. For now, the Chinese are investing in Israel like crazy. An estimated 12% of the financing rounds of Israel’s high tech in 2018 was Chinese, and significantly more so in mid-range and heavy investment. The Chinese have recently also displayed an interest in medium- and small-sized tenders and deals in Israel — not just in mega projects. They are expanding their investments and influence in Israel at an increasing rate, pushing out other international firms. Israeli firms are suffering too. Military Intelligence Chief Maj. Gen. Tamir Hyman told a Dec. 12, 2018, session of the Knesset’s Foreign Affairs and Defense Committee that China is one of the world’s dominant economic powers and “Chinese money is rebuilding Syria.” The government’s security Cabinet discussed the growing Chinese involvement and influence in Israel last November. The Israeli dilemma is complex: Its taste for Chinese money is growing even as it seeks to tighten its chokehold on Iran with economic sanctions.

“At this point,” a senior Israeli defense source told Al-Monitor on condition of anonymity, “we are still managing to keep this sensitive issue on the back burner — perhaps due to the fact that President Trump himself is not paying it special attention.” Netanyahu has a powerful secret weapon that could help tone down possible White House criticism. US billionaire Sheldon Adelson, who is close to Trump and was a major donor to his campaign, owns huge casinos in Chinese Macau and enjoys significant strategic connections with top Chinese government echelons. So far, there is no indication that his intervention has been sought. Israel, however, does not want to think what would happen if and when someone were to convince Trump that the total devotion of the Israeli economy to China is endangering US interests.