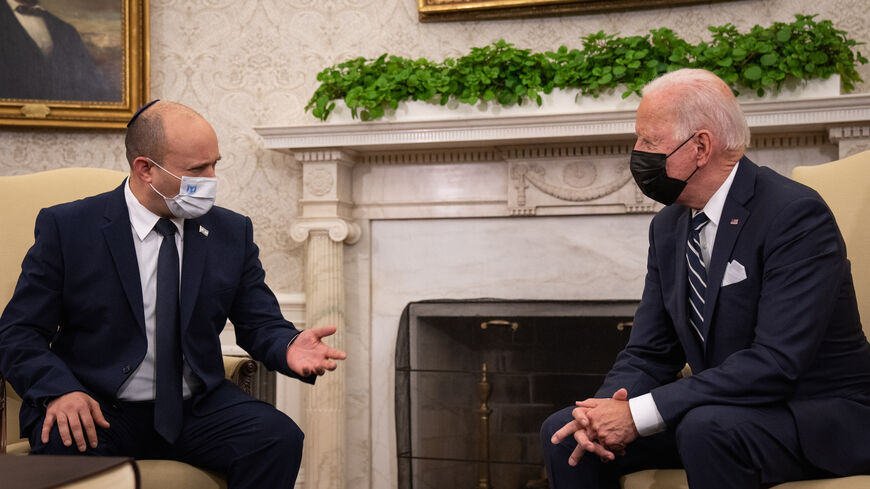 Statements by Israeli Prime Minister Naftali Bennett before and after his Aug. 27 meeting with US President Joe Biden outlined the two main messages conveyed to the American administration: First, the Bennett government brings to Washington a fresh new spirit of dialogue and cooperation. The Israeli government is coming with a “new spirit of goodwill … of hope, a spirit of decency and honesty, a spirit of unity and bipartisanship,” he noted. Biden was evidently receptive to this message, saying, “It’s great that the prime minister is here. We have become close friends."

The second message concerned the Iranian issue. Israel’s government is keen to establish an intimate dialogue with Biden’s administration over the Iran talks so as to could impact the outcome. Biden has pledged that Iran won’t develop a nuclear weapon. Israel is hoping for more.

Bennett and Biden and their teams also discussed several other topics in the private meeting between the two leaders and in the larger White House meeting that followed, as well as Bennett's other meetings in Washington with US officials.

One of the topics Biden raised was the conflict with the Palestinians. In an Aug. 24 interview with the New York Times, Bennett had said his government would neither annex West Bank territory nor allow it to become a Palestinian state. Ahead of the meeting with Bennett, Biden said, “We also are going to discuss ways to advance peace and security and prosperity for Israelis and Palestinians." Bennett did not address the issue in his statements during the visit.

According to the Israeli press, US National Security Council director for the Middle East Barbara Leaf confirmed that Biden raised with Bennett the issue of reopening the US Consulate in Jerusalem. Former President Donald Trump had shut down the consulate, which had served as the de facto American mission to the Palestinians, in 2019. Shortly after taking office, the Biden administration made it clear that it plans to reopen it, but agreed to wait for approval of the Israeli state budget, essentially a vote of confidence in the government. Leaf said Biden made it clear on Friday that the president still plans to reopen it. An Israeli diplomatic source was quoted by Ynet as saying that this subject was a point of disagreement between Israel and the United States, stressing it must be handled via reasonable dialogue.

Leaf also confirmed that Biden expressed his opposition to Israeli evictions of Palestinian families from their homes in the Jerusalem neighborhood of Sheikh Jarrah. Jerusalem has insisted that the issue is a legal and not political matter.

According to other reports, Biden asked Bennett to take steps to improve the economic situation of the Palestinians. Bennett apparently agreed and even said he had instructed national security adviser Eyal Hulata to advance measures to that end.

Bennett and the Biden administration also apparently discussed China. The China issue apparently did not come up in the personal meeting between the two leaders, but was discussed by Israeli delegation members and their American peers. Reports about the Aug. 11 visit in Israel of CIA director Willian Burns read that he expressed to Bennett American concerns over increasing Chinese investment and involvement in Israel, particularly in the high tech industry. Specifically, the United States is concerned over the participation of the Chinese company CRCC in bidding on the construction of new light rail lines.

Analyzing Bennett's visit, Israeli journalist Amos Harel wrote that that the era of Israel dancing at both weddings — maintaining a strategic alliance with the US while conducting business with China — is now nearing an end.