In his warm meeting with President Joe Biden, President Reuven Rivlin prepared the ground for an upcoming first visit in Washington by Prime Minister Naftali Bennett. 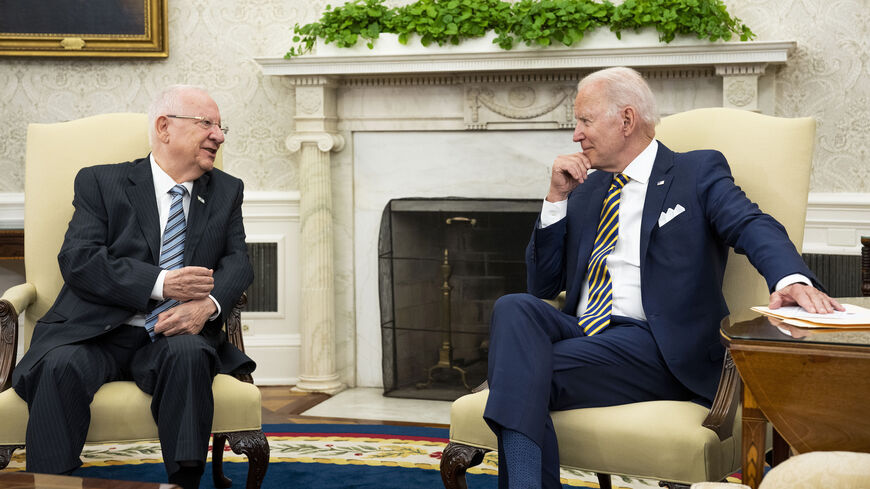 Reuven Rivlin and Joe Biden have known each other for 50 years. They first met in Jerusalem in 1971 when Rivlin served as deputy to the city’s legendary Mayor Teddy Kollek and Biden was a local Delaware politician planning a Senate run the following year. Rivlin took Biden on a wide-ranging tour of Jerusalem and apparently imbued him with some of his endless love for the city in which he was born. They have been friends since. They are contemporaries. Rivlin took part in the realization of the Zionist vision as Biden looked on in admiration. Biden made his famous remark about not having to be Jewish to be a Zionist in one of his meetings with Rivlin.

The friendship came full circle this week with the two presidents meeting at the White House. Biden, who took office this year, seems to offer an antidote to the chaos wrought by former President Donald Trump. Rivlin, who leaves office July 9, came to pave the way for a White House visit by Israel’s new Prime Minister Naftali Bennett, who replaced former Prime Minister Benjamin Netanyahu and seeks to establish calmer governance. According to meeting participants, Rivlin achieved his goal.

The Oval Office meeting was scheduled for 60 minutes, but spilled over into almost two hours. Biden’s secretary walked into the room three times and placed a note in front him alerting that he was running late. Biden, who clearly felt greatly at ease with his guest, read Rivlin the notes and both laughed. They reminisced and traded experiences, but did not steer clear of controversy.

The Israeli president is largely a ceremonial figure as head of state. Nonetheless, Rivlin was clearly on a diplomatic mission. He met prior to his departure for Washington with Bennett and Foreign Minister Yair Lapid. At the White House, he explained to Biden the new government’s need for his administration’s support and understanding.

Support is easy; understanding is a whole different ballgame. Contrary to what Netanyahu drills into his supporters, Israel’s new government does not really represent the political left. It is undoubtedly further right in its views, as can be seen in the compromise reached this week with settlers on the evacuation of the illegal West Bank outpost of Evyatar. Nonetheless, the Democratic administration vastly prefers Bennett and Lapid over Netanyahu, who shaped much of his domestic popularity as a proud hard-liner on the back of Biden’s former boss, Democratic President Barack Obama.

Biden and his team seem to be trying to turn a page with Jerusalem, to adopt an intimate dialogue devoid of lies, spin and tricks, even when disagreements surface. They will find in Bennett and Lapid willing partners. In return, they will have to ease up on the Israelis regarding the Palestinian issue. The Iranian nuclear program is a source of deep disagreement between them that probably cannot be bridged. They appear to have decided to iron out and reconcile differences wherever possible and under no circumstances to allow their disagreements to flare up as they did under Netanyahu.

Israel’s new government needs the Americans to realize that it cannot advance a significant peace process with the Palestinians and has conveyed its wishes to the Americans through various channels in recent weeks. Rivlin presumably did, too. Israel needs the United States to delay the reopening of its consulate in east Jerusalem, part of a plan to restore direct ties with the Palestinians, severed by Trump. Netanyahu will surely exploit the move to portray Bennett as an American stooge compared to his own uncompromising stand vis-à-vis the United States.

Much of the Biden-Rivlin meeting was devoted to the impending agreement with Iran on its nuclear program. Rivlin came equipped with intelligence and evidence of the threat Israel sees in a swift US return to the 2015 agreement. Biden did not clash directly with Rivlin, but raised a question for which Israel does not have a real answer.

Sources quoted Biden as asking his guest, what do you suggest we do? After all, you convinced the previous administration to withdraw from the agreement and Iran is far closer today to a bomb than it was under it. Rivlin left it to Bennett to try to convince the United States, telling Biden he was there only to pave the way for Bennett to meet with him. Rivlin suggested moving forward rather than looking back, and Biden offered his usual reassurance that he would never allow a nuclear Iran on his watch. Rivlin politely avoided replying the obvious: that Israel's goal is not to delay an Iranian bomb, it is to thwart Iran’s nuclear ambitions once and for all.

Biden asked to speak with Rivlin’s daughter Anat, who accompanied her father on the visit. She reminded Biden of Nechama, Rivlin’s wife of almost 50 years who died in 2019 of lung disease. When Biden heard that the president’s chief of staff Rivka Ravitz was a mother of 12, he showed her a photo of his own mother. Despite their different mindsets, there is no distance between Biden and Rivlin. Even when they argue they do so without emotional outbursts.

Now the question is how Biden and Bennett will get along. Biden is 30 years older, the product of a bygone analog era, of a world in which politicians moved slowly and made their way to the top with Herculean labor. Bennett is a successful tech entrepreneur with a digital orientation who rose through a unique convergence of circumstances from a party with only six seats in the 120-seat Knesset. As the son of American immigrants his English is flawless, but he speaks a different language than Biden does on key issues such as Jewish West Bank settlements and the Palestinians’ right to a state.

Bennett will have to rehabilitate Israel’s relationship with the Democratic Party, eroded under Netanyahu, as well as Israel’s ties with the mostly Democratic American Jewish community, in order to guarantee one of Israel’s most vital assets: bipartisan American support. It will not be easy.