Foreign Minister Yair Lapid has spoken boldly of correcting "mistakes" between the United States and Israel. 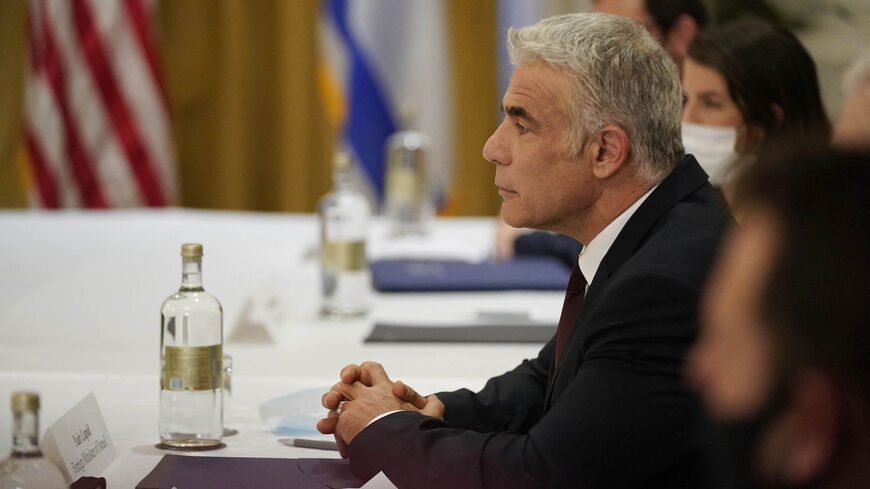 Nine months after the signing of the Abraham Accords between Israel and the United Arab Emirates, Foreign Minister Yair Lapid took off July 29 for a historic visit to the United Arab Emirates. Heading a senior delegation from the Foreign Ministry, Lapid inaugurated the Israeli Embassy in Abu Dhabi — an event originally planned by former Prime Minister Benjamin Netanyahu. Netanyahu, as one of the architects of the Abraham Accords, had planned to use the inauguration in his election campaign, but the ceremony was pushed back several times.

Now Lapid has a leadership position and is more the government’s strong man than Prime Minister Naftali Bennett. He has succeeded in positioning himself as the leader of Israel’s center-left and it will serve him well in the coming years.

According to the rotation agreement with Bennett, Lapid will replace the latter in about two years. But even if that plan goes awry, Lapid will reach the coming elections strengthened by experience in the diplomatic realm. Lapid also has numerical strength over Bennett with regard to the size of his bloc; it is clear that the center-left parties are succeeding in setting the tone.

As Lapid builds his diplomatic agenda as foreign minister, he must set himself apart from Netanyahu, who remains in the opposition as the undisputed leader of the right, and also from his partner Bennett, head of the right-wing Yamina, which advocates annexation of the territories.

Lapid has started to advance his international status with an independent agenda with his first trip overseas as foreign minister to Rome, where he met June 27 with US Secretary of State Antony Blinken. He also met with Bahrain’s Foreign Minister Abdullatif bin Rashid al-Zayani, with whom he spoke about the need to unite behind peace efforts in the Middle East.

The more important and interesting meeting was with Blinken, who had already spoken to Lapid by phone several times since the new government was installed in Israel. It is an open secret that the new US administration hoped that Netanyahu would be replaced and is now making efforts to treat Bennett and Lapid well and avoid the Palestinian issue for the time being. With Lapid representing the Israeli public that has not given up the dream of two states, though there are no immediate plans to push for a peace agreement between Israel and the Palestinians, the Americans seem to feel that a window of opportunity has opened to thaw relations and bring Palestinian President Mahmoud Abbas to the new Israeli leadership.

Therefore, the Americans are building up Lapid as a future partner. Of course, he will be careful not to step on the toes of his right-wing partners headed by Bennett.

The first test is, of course, the nuclear talks between Iran and the United States. On this subject, Lapid has not deviated from the official stance of former Prime Minister Benjamin Netanyahu’s era, but there is an essential difference. While Netanyahu fought publicly against the agreement formulated by President Barack Obama and thus was not part of it, the Bennett-Lapid government wants to work with the Biden administration to improve Israel's position.

Lapid’s declaration in the session with Blinken in Rome reflected this approach. “Israel has some serious reservations about the Iran nuclear deal that is being put together in Vienna. We believe the way to discuss those disagreements is through direct and professional conversations, not in press conferences."

Less expectedly, Lapid expressed himself regarding the damage Netanyahu inflicted on Israel’s relations with the Democratic party, saying, “In the past few years, mistakes were made. Israel's bipartisan standing was hurt. We will fix those mistakes together.”

“That was a bit strident,” Danny Ayalon told Al-Monitor. The former Israeli deputy foreign minister and ambassador in Washington went on, “Those are words to be uttered behind closed doors, quiet diplomacy. In essence he is correct, but we must avoid insulting the Republicans with such expressions, as I assume that his intentions are to return to the tradition of two-party US support that endured until the Netanyahu-Obama period. For example, Lapid must take care that on his way to rehabilitate relations with the Reform Jewish community, he does not irritate the evangelists.”

Perhaps it was a slip-up due to inexperience. However, it is clear that Lapid intends to emphasize bipartisan relations with the United States and that he will strive for an intimate relationship with Biden’s White House.

The old-guard Democrats in Washington who took part in the peace initiatives between Israel and the Palestinians until the Clinton era clearly have hopes for Lapid. For example, former US Ambassador to Israel Martin Indyk, who has been a central figure in the negotiations between Israel and the Palestinians over the past 30 years, expressed optimism after the meeting.

Indyk tweeted a link to the New York Times' headline “Meeting Blinken, Israel's Top Diplomat Aims to Fix Netanyahu’s 'Mistakes.' He commented, “This report of Yair Lapid's meeting with Blinken put a smile on my face. At last, the US-Israel relationship is in responsible hands and back on track.”

Is Lapid preparing the way for renewed negotiations with the Palestinians when he becomes prime minister, a changeover that will take place within Biden’s current administration?