One of the first tasks of Prime Minister Naftali Bennett and Foreign Minister Yair Lapid is to find a way to work with the administration of US President Joe Biden. 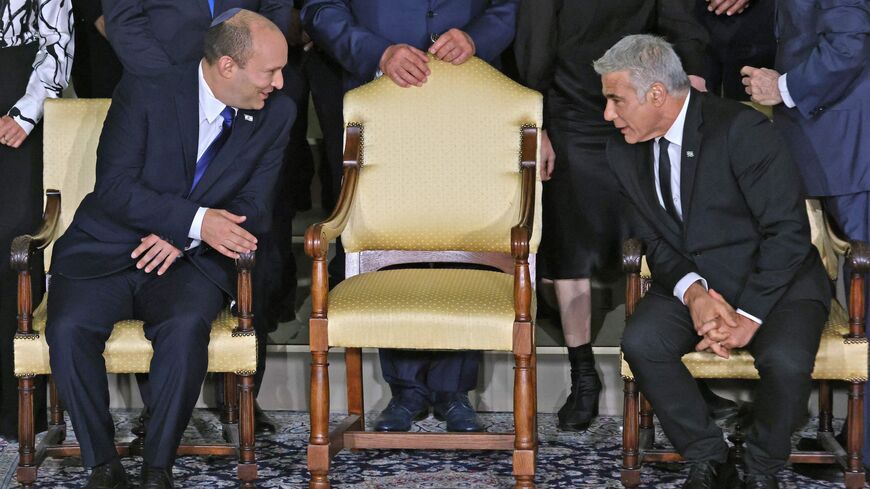 Naftali Bennett, then Israel's economy minister, was a guest of the annual Brookings Institution’s Saban Forum in Washington on Dec. 7, 2014. He was interviewed by former Ambassador to Israel Martin Indyk, one of the foremost experts on the Israeli-Palestinian conflict who was instrumental over the years in US efforts to reach an accommodation between the sides.

At the end of their stormy conversation, Indyk looked as though he had been put through the wringer. He had obviously never met anyone like Bennett — an Israeli bucking all conventions and dismissing all pervasive assumptions regarding the two-state solution. Bennett was unapologetic throughout, delivering his various theses in fluent Netanyahu-style English (his Jewish American parents moved to Israel from San Francisco in 1967). Indyk had been given a peek at the future of Israeli politics.

Since then, Bennett’s views, which deviated from the consensus of 2014, have become almost mainstream in Israel. The Palestinian issue has been relegated to the margins, there are no negotiations between the sides and no aggressive US peace-making. Both sides accuse the other of recalcitrance and both are right. The Palestinians are deeply split between Hamas and Fatah, while Israel is ruled by the political right that has abandoned the two-state idea, of which it was never convinced. Bennett has won largely because of Netanyahu.

Is Bennett of 2021 the same maverick interviewee Indyk met in 2014? Not quite. Israeli prime ministers often explain changes in their positions using an expression taken from a popular Israeli song that was famously used by the late Prime Minister Ariel Sharon to explain his decision on Israel’s withdrawal from Gaza. “What you see from here, you do not see from there.”

Bennett’s ideology has not changed, but he has matured and realized that Israel does not operate in a vacuum. When he took office on June 13, he was immediately exposed to the international constraints that every Israeli prime minister faces. Bennett is unlikely to ever advocate a Palestinian state, but what position will he take regarding Israel’s relationship with the Palestinian Authority and its activity in Area C of the West Bank, which is under Israeli control? What will he do about the festering sore that is Gaza? And will he accelerate construction of homes for Jewish settlers? These and many other explosive issues are already piling up on his desk.

And how will Bennett navigate Israel’s relationship with the White House? Can he bridge the deep disagreements he has with President Joe Biden and his team, which consists mostly of Obama administration alumni?

In a fiery farewell speech to the Knesset on the final day of his term, Netanyahu made it clear he would do all he could to fan the flames between Bennett and Biden. His comments stunned his listeners. Contrary to the tradition of prime ministers helping their successors confront international challenges for the good of the country, Netanyahu highlighted his disagreements with the Biden administration as a badge of honor, dismissing Bennett as a weakling who unlike himself would cave to US pressure on the Iran nuclear agreement.

Netanyahu tried to lock Bennett into his own policies, to turn him against the US administration on both the Iranian issue and the Palestinian issue. In doing so, Netanyahu proved yet again that he cares far more about his own personal good than the good of the country. On the other hand, Bennett will have a hard time setting himself apart from Netanyahu without losing the support of the right-wing electorate. Netanyahu’s irresponsible comments prompted a response from newly installed Foreign Minister Yair Lapid, who will switch jobs with Bennett and become prime minister in two years. Israel opposes the US return to the nuclear agreement, said Lapid, arguing, “It's a bad agreement.”

Bennett and Lapid will work as a team on the Biden administration. Lapid will take charge of the day-to-day contacts with Washington, which feels far more comfortable with him than with Bennett. Lapid was the one who tried to iron out differences with the Obama administration as Netanyahu’s finance minister from 2013 to 2015. The most urgent task facing them is to mobilize the administration’s support for their government’s survival — to set expectations and guidelines and try to convince the Americans to focus on improving the lot of the Palestinians because there is no point in political negotiations with them given the yawning gaps between the sides to the conflict.

Another Israeli who will likely sign up for the task is Isaac Herzog, Israel’s next president who takes office next month. Herzog also has many fans in the US administration and he will strive to position himself as a deal-maker between Jerusalem and Washington. Although the Israeli presidency is largely a ceremonial position, Herzog is highly experienced in the international arena and will assist Bennett and Lapid in their endeavors. The planned appointment of former Military Intelligence Chief Maj. Gen. (res.) Amos Yadlin as the government’s national security adviser also reflects Bennett’s understanding of the vital ties with the United States. Yadlin is a respected figure in Washington and enjoys successful working relationships with senior Biden administration officials.

“The future of the Bennett-Lapid government rests in Biden’s hands,” a senior member of the new government told Al-Monitor on condition of anonymity. “We hope the administration will understand the constraints under which we are operating and let us get on with it.”