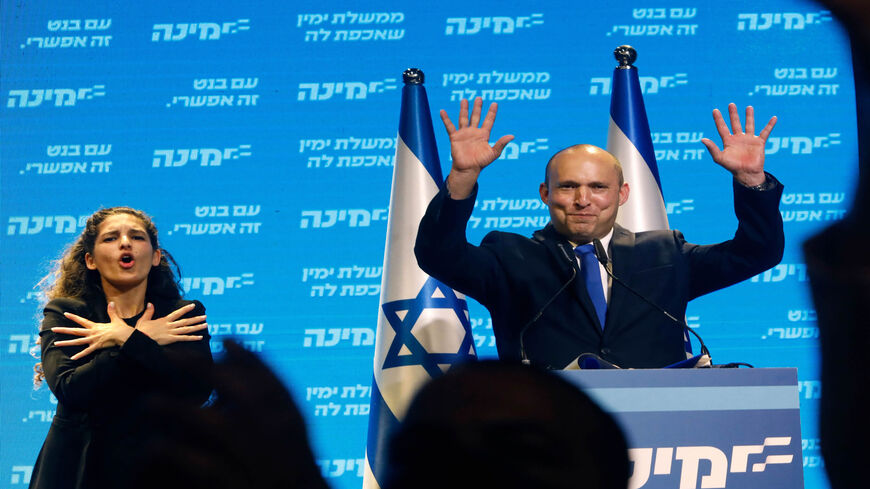 Imagine Ross Perot, who ran as an independent in the 1992 US presidential elections and pulled in fewer than 19% of the vote, winning Electoral College support and moving into the White House instead of the winner, Bill Clinton, or Republican challenger George Bush. That is precisely how things stand in Israel, with one significant difference: Naftali Bennett’s Yamina party garnered 6% of the vote in the March 2021 elections, not 19%, but his prospects of becoming Israel’s next prime minister are looking pretty good.

Israel’s electoral system is vastly different than the American one. The prime minister is not elected directly. The job goes to the candidate who puts together a coalition of parties that enjoys a majority in the 120-member Knesset. By dint of the anomalous circumstances and political chaos of the past two years, Bennett stands the best chance of forming such a coalition and leading Israel’s 36th government. Under the emerging deal, he would serve for two years and then switch jobs with Yesh Atid Chair Yair Lapid for the second half of the government’s term.

In a prank of history more reminiscent of slapstick comedy than statecraft, Bennett — a distinctly right-wing, kippah-wearing ideologue who presumes to lead Israel’s religious Zionism movement — is riding a white horse at the head of the country’s center-left political camp, hailed as its savior from the clutches of Prime Minister Benjamin Netanyahu. Bennett has been playing both sides of the fence in recent months with complex, risky and fascinating maneuvers. He promised his party’s support to Netanyahu should he need it to make up the missing numbers for a 61-seat majority, “proving” to his right-wing base that he could not be blamed for bringing the Netanyahu era to its end.

However, Bennett knew full well that even with the support of Yamina’s seven lawmakers, Netanyahu would still fall short of a majority. Bennett was counting on the head of the Religious Zionism alliance, far-right Bezalel Smotrich, to reject a government beholden for its majority to the abstention of the Islamic Ra’am party. Smotrich did not disappoint, deflecting enormous pressure from Netanyahu, his allies and rabbis. If things go according to plan, Bennett’s crowning will be attributed to Smotrich, who rather likes the idea. The way he sees it, Bennett has crossed the lines, leaving him the unchallenged head of Israel’s religious Zionism movement. A win-win situation is somewhat rare in Israeli politics, but that appears to be the case.

Once it became clear that Netanyahu would be unable to form a majority coalition before his 28-day deadline expired, Bennett jumped immediately into Lapid’s waiting arms. Truth be told, Bennett had been negotiating with Lapid even as he promised his conditional allegiance to Netanyahu. Lapid knew that the only way to ensure Yamina’s support for the majority he needs would be to offer him first shot at the premiership — despite leading the Knesset’s second-largest party with 18 seats. So far, one Yamina lawmaker — Amichai Chikli — has declared his refusal to vote for a Bennett-Lapid government, and Netanyahu is determined to mobilize others.

Bennett, meanwhile, is closing ranks, determined to become prime minister. This coming week will be one of the most crucial in contemporary Israeli politics. If Lapid and Bennett can form a government quickly, foiling sabotage attempts from the right, Bennett will become Israel’s first religious prime minister. His detractors on the right will deride him, but he will ensure his place alongside Israel’s notable leaders in the annals of history.

Bennett is being flagged as a dangerous ideologue, verging on the messianic. The facts are far more complex. Bennett is a high-tech entrepreneur with at least one medium-sized exit under his belt freeing him of financial worries. He is 49, the son of Jewish immigrants from San Francisco. He is creative, diligent and very talented. Unlike most of his fellow religious, right-wing believers, Bennett’s cultural milieu is influenced by the liberal leanings of the affluent Tel Aviv area town of Ra’anana he calls home and of the high-tech community where he prospered.

Bennett was for years the “enfant terrible” of the government and the military. During Israel’s 2014 war with the Gaza Strip, he harassed Netanyahu, then-Defense Minister Moshe Yaalon and army Chief Benny Gantz, demanding an offensive against Hamas terror tunnels leading into Israel. He presented the Cabinet with a plan to destroy the terror infrastructure in Gaza without having to invade the enclave or occupy it. His so-called “cratering plan” consisted of prolonged, targeted airstrikes along with pinpoint commando raids. He proposed evacuating Israelis living along the Gaza border to protect them from collateral damage.

His views regarding Israel’s northern front are even more interesting. He once proposed to the security Cabinet that if things are blowing up here in Israel, things should be blowing up in Tehran, too. In other words, he urged a shift in Israel’s strategic shadow campaign against Iran to make it more public. The Iranians, according to Bennett, should know that each rocket launch or terror attack they instigate against Israel will be answered with an immediate military blow to their territory. There’s no point in continuing to fight the tentacles of the octopus time after time without hitting its head, Bennett advised.

Bennett’s thinking is challenging, adventurous and creative, but that might only apply as long as he does not hold a responsible leadership position. If he takes his seat in the prime minister’s office, the international community might find a different Bennett there. To cite the late Prime Minister Ariel Sharon, a hard-line hawk-turned-pragmatist, “What you see from here you don’t see from there.” In other words, when reaching the prime minister’s office, things look different compared with when you are in the opposition. Bennett will have to curb his short fuse, learn patience and adjust to national responsibility. He has proven in recent years that he can. He is unlikely to rush into military adventures, and anyone who thinks he will order an airstrike on Iran upon assuming office has another thing coming.

Bennett’s coalition will span the entire spectrum from left to right, except for the ultra-Orthodox parties. Its hands will be tied on issues related to the conflict with the Palestinians. By and large, Bennett is a man of his word, considered honest, and his relationship with his potential partner Lapid is based on mutual trust and affection. If the two manage to square the circle through some miracle, theirs would be the most complex and fascinating government in Israeli history. US President Joe Biden would find Bennett an interesting interlocutor, with Netanyahu-level English-language skills and a distinct right-wing view of the world. Unlike Netanyahu, who was perceived for some years as supporting the two-state solution, Bennett has always opposed the idea. It will be interesting to see whether his position evolves after his first Oval Office meeting.