An increasing number of reports indicate that tensions are growing between advisers in the team of Prime Minister Naftali Bennett and advisers of Foreign Minister Yair Lapid. 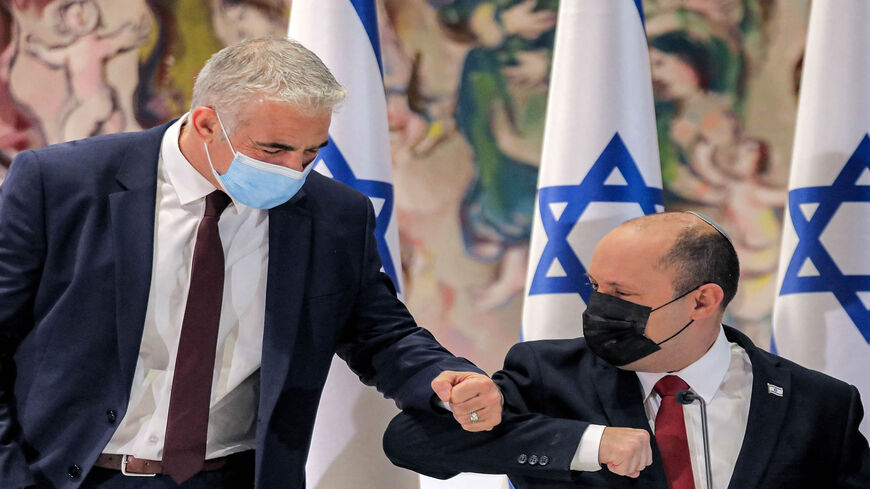 In another year and a half — on Aug. 27, 2023, to be exact — Foreign Minister Yair Lapid will be taking over the prime minister’s office, as part of the rotation agreement that made the current government possible. If everything goes according to plan, incumbent Prime Minister Naftali Bennett will step down after a two-year term as prime minister and become the next minister of the interior.

The question is whether this will really happen. Ever since the current government was formed, everyone wondered whether Bennett really will respect the rotation agreement and vacate the prime minister’s office.

True, he and Lapid have presented a united front ever since the government was first formed. They only have good things to say about each other, in their speeches and on social media. Both make a concerted effort to send the message that the only thing that matters to them is the nation’s well-being.

Bennett and Lapid first formed a political alliance after the 2013 election, when they were both young politicians at the start of their careers. They did have a falling-out for a few years, but they began cooperating again, this time even more fully, after the fourth election. In the end, the alliance between them finally brought about an end to former Prime Minister Benjamin Netanyahu’s long years in office.

That all changed this week. Cracks began to appear in the otherwise amicable relationship between the prime minister and his foreign minister. It all started because of new reports about the bitter relations between their two offices.

A report that first appeared on Channel 12 News claimed that there was nothing new about the tensions between them. In fact, things started to heat up just weeks after this government was formed. At the center of the controversy was Bennett’s political adviser, a former journalist named Shimrit Meir.

At the time, the media reported that Bennett was having a hard time arranging a face-to-face meeting with US President Joe Biden. Lapid offered to help out, or in other words, to use his connections in the White House to set up the meeting. Meir attributed the leak to Lapid. She regarded it as an attempt by his office to minimize the importance of her and her boss, Prime Minister Bennett. Thus began the opening salvo in an ongoing war between the two offices, even if, on the outside, the relationship seemed as harmonious as ever.

A little further down the road, Lapid’s office reportedly came to believe that Meir was responsible for a series of leaks that were harmful to the foreign minister. They even threatened to stop working with her. It all came to a climax last month, during a diplomatic crisis with Turkey, following the arrest of two Israelis who were charged with espionage. The crisis was managed by Lapid, together with the director of the Mossad, and with the help of President Isaac Herzog. The couple was eventually released.

Lapid and Bennett took advantage of this fortuitous circumstance by meeting the couple and taking photos with them as soon as they returned to Israel. It was all very friendly, at least on the outside, but tempers were rising in their respective offices. Both the prime minister’s office and the Foreign Ministry wanted to take credit for the successful outcome. Once again, Meir was accused of trying to magnify Bennett’s role at the expense of Lapid.

As if that was not enough, she allegedly played down the important role played by the director of the Mossad as well, so that she could better position Bennett as the key figure in the incident. She was even suspected of leaking classified information considered harmful to the head of the Mossad and his reputation. Not only did Meir deny all this, she received the complete and unconditional support of Bennett himself. He even offered at first to take a polygraph test to confirm his position, only to avoid doing so in the end.

Meir, who was once a news commentator on Arab affairs, is now considered the most powerful person in Bennett’s inner circle, and certainly the person closest to him. She has successfully weakened the stature of his most veteran advisers, who were with Bennett for years, and she continues to accumulate power and authority. Simply put, Bennett trusts her, so he consults with her, no matter what he does, politically or diplomatically. Meanwhile, she fights for him to keep his position in a government with more than its fair share of costars. If the reports are to be believed, very often this comes at the expense of Lapid.

Both Bennett and Lapid were quick to deny that their offices were squabbling, as soon as the latest reports came out this week. Nevertheless, all their efforts were hardly enough to keep the story out of the public’s eye … and for new information to leak out. True, the feud is limited to their respective offices, or in other words, to the advisers of the prime minister and foreign minister. It does not involve the prime minister and foreign minister themselves. Still, these are the people closest to Lapid and to Bennett, so it would be impossible to imagine that they are not involved in some way. This is especially true of Meir, who is the person closest to Bennett.

Given all of the above, people started wondering this week whether Bennett really will fulfill his part of the rotation agreement. We will only find out in real time, but we can try to assess his inclination.

This is hardly the first time that this sensitive issue has played a role in Israeli politics. Last October, for example, quotes allegedly made by Bennett in a private conversation had him saying that he doesn’t believe that the rotation agreement would happen. He supposedly said, “I believe that it [the rotation agreement] will not happen. It is reasonably likely that the government will fall apart sometime between the passing of the budget and the rotation … for a variety of reasons.”

Bennett’s remarks caused a commotion, embarrassing the coalition, when it was trying so hard to relay a sense of harmony and united purpose within its ranks. Bennett and Lapid responded by doing what they do best. They went straight to all the social media platforms to say that the relationship between them is excellent. Bennett’s office announced that he will fulfill the rotation agreement in full, and that the partnership between him and Lapid will continue.

The conciliatory attitude between Bennett and Lapid continued on Twitter. Bennett tweeted, “Lapid is an outstanding foreign minister, a fair partner and a friend. The latest reports do not reflect my position and certainly not my commitment to the agreement with him. We shook hands. We will ignore the background noise. The budget will pass, and this government will continue to move Israel forward.”

Lapid responded with a tweet of his own: “I am sorry to disappoint our rivals. I spoke with Bennett tonight about the transparent attempts to cause friction between us right before we pass the budget. We won’t let it happen. The prime minister and I have a single objective: to pass the budget and strengthen the government. I will not be distracted by leaks and recordings intended only to harm us.”

Since then, the budget has passed. The new government got over the biggest hurdle facing it and with that, gained a stability. It also brought Lapid even closer to the prime minister’s office. Behind the scenes, however, things are not so bright. Bennett and Lapid do have an alliance, but they are both relatively young politicians who want to remain in politics for the long haul. There is no way to know if, sometime in the future, they will once again be rivals. After all, it wouldn’t be the first time they had a falling-out.