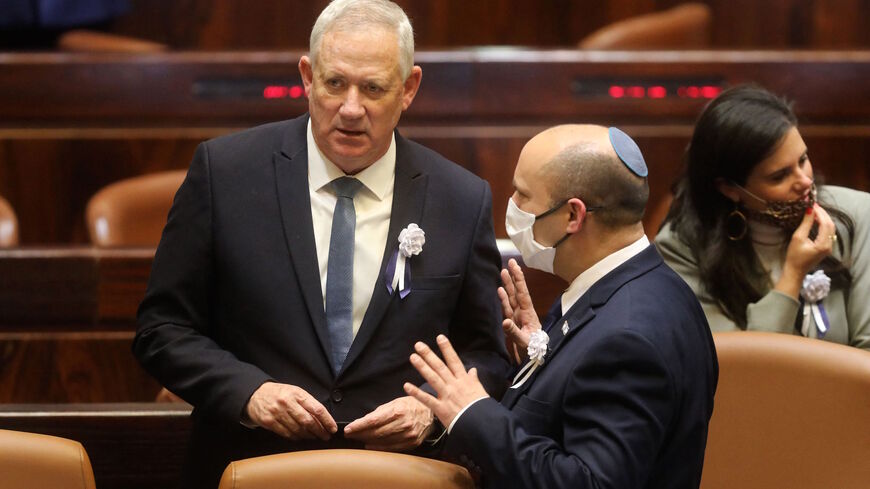 Israel's Defence Minister Benny Gantz (L) and Prime Minister Naftali Bennett speak to each other at a Knesset meeting during which Isaac Herzog, a veteran of Israel's left-wing Labor party, was sworn in as the Jewish state's 11th president, replacing Reuvin Rivlin, in Jerusalem, on July 7, 2021. - GIL COHEN-MAGEN/AFP via Getty Images

During his speech, Bennett revealed that the Mossad had been operating in foreign countries to collect information about navigator Ron Arad, who was captured and disappeared in Lebanon 35 years ago. Even with his mask on, the defense minister looked resentful and jumpy. He was sitting beside Foreign Minister Yair Lapid and Justice Minister Gideon Saar, both of who looked relaxed and friendly, whenever they interacted. Anyone could see that of the people sitting there, Gantz was the outsider.

In this case, however, the defense minister's glares represented much more than the everyday tension between the two men. It reflected something that had happened just moments before Bennett took the podium. That was the first time Bennett informed the defense minister that he planned to go public about the operation, which Gantz had originally approved. In contrast, Bennett informed Lapid of his intentions well before his speech to the Knesset.

Gantz considered the move a mistake, but there was nothing he could do at that moment to stop Bennett. It was obvious to him that Bennett’s considerations were political, an attempt to improve his dismal rankings in the polls. What made matters worse was that the “bold” operation, as Bennett described it, had no concrete results, nor did it offer any clues to the mystery surrounding Ron Arad’s fate.

Bennett, it seems, realized that Gantz would likely try to stop him from disclosing the story of the operation to the public. That was apparently why Bennett decided to exclude Gantz.

As soon as Bennett finished his speech, the media started asking tough questions about why it was even necessary to discuss an operation that did not have any positive results. Criticism from top security officials only intensified the next day, when the foreign press revealed that the Mossad abducted an Iranian general in Syria as part of its efforts to find information about Arad. According to reports appearing overseas, the general was taken to some country in Africa, where he was interrogated and released.

Immediately after this, a source in the defense establishment was quoted as saying that the operation had failed. As reported in Haaretz, the source said that the operation, “didn't yield the desired results and the information we were hoping for wasn't uncovered.” Channel 12 News reported that Mossad Chief David Barnea called the operation a “failure.”  Apparently, he told his people that the operation “was bold, daring and complex. But it wasn't a success, it failed. It was a failure.”

An unnamed source in the Prime Minister’s Office pushed back against this criticism, saying that this was “a successful operation that did not lead to a significant breakthrough." The source said that Bennett’s decision to go public was coordinated fully with the Mossad: “The head of the Mossad issued a message to the members of the organization in which he said that the operation was successful and important.”

Regardless of whether it was important or not, Bennett did not gain from it. It also opened a window into the growing tension between him and Gantz. People close to the prime minister are convinced that the defense minister himself is behind all the statements attributed to “defense officials” intended to make Bennett look bad.

Given this, it is no longer possible to hide the tense, often murky relationship between Gantz and Bennett. The real question is how it will impact an already fragile coalition.

Gantz may be a major pillar of this coalition, but he is still considered “problematic.” Ever since the new government was formed, he has made no effort to hide his frustration. He knows that he would be prime minister now, if only he had accepted Netanyahu’s offers. Actually, Gantz and his Blue and White party still receive offers from the Likud to dismantle the current government. If Gantz does this, sources say, he would immediately become prime minister. While Gantz rejects these offers, he has enjoyed flaunting them ever since the coalition was formed to maintain a “balance of terror” with the other coalition partners.

While Gantz does not seem ready to blow up the coalition, the fact that he lets that option hover over the government creates an overall sense of apprehension. But this is a serious problem. A prime minister should not feel so wary of his defense minister that he decides to keep important information from him. It could result in a major crisis.

In August it was revealed that Bennett’s diplomatic adviser Shimrit Meir met with the Chief of the Southern Command Major General Eliezer Toledano on several occasions, without first briefing the defense minister about it. More recently, it was learned that even after Gantz expressed his outrage, Shimrit and Toledano continued to meet, with the approval of Chief of Staff Aviv Kochavi.

Gantz was upset that Kochavi allowed Bennett to go behind his back and establish a direct line of communications with the IDF’s top brass. This tells us that the tense relationship between the prime minister and the defense minister is only getting worse, and that it could be quite volatile.

One top official close to Gantz told Al-Monitor on condition of anonymity that he blames Bennett for deflecting media criticism toward Gantz, so that it does not focus on his growing list of failures, chief among them the serious mistake of disclosing a Mossad operation.

That same official said that the very fact that Gantz is rising in the polls and receiving high marks for his performance – he is, in fact, the most popular minister – is why Bennett and other coalition leaders are trying to hurt him. “They have turned him into a punching bag in an attempt to weaken him. They accuse him regularly of wanting to topple the current government and form a coalition with Netanyahu instead. But that’s not true. Gantz made his choice. He is in the coalition. But he will not let them walk all over him.”

This is the mood in the current government. While the current coalition is expected to pass the state budget by November, once it gets past this hurdle, the constituent parties will feel free to act more independently. Once that happens, the tension between Gantz and Bennett is likely to get worse.