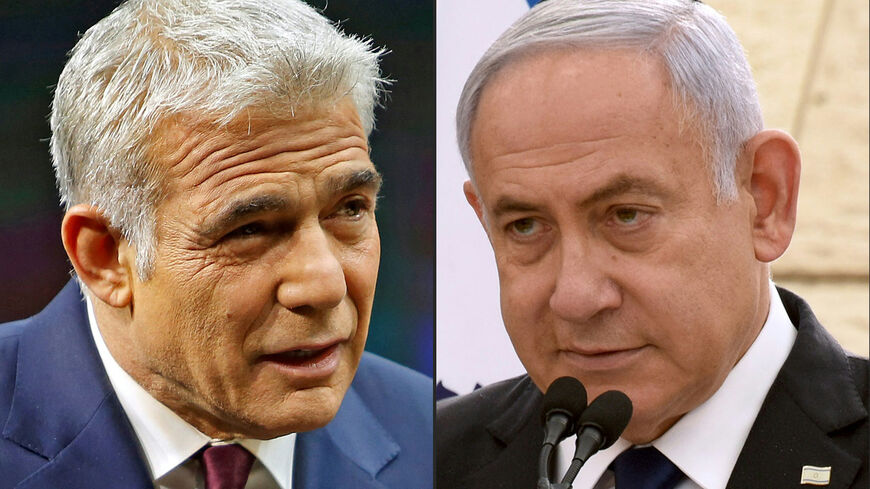 Israelis are on another political rollercoaster today. This evening, President Reuven Rivlin announced he was handing Yesh Atid leader Yair Lapid the mandate for composing the next government. This morning 56 Knesset members told the president they support Lapid for the job.

The drama has certainly taken a toll on Israelis and is far from over. It is not at all clear if Lapid will succeed at the task. In contrast, Netanyahu’s defeat is clear. Already last week Netanyahu looked closer than ever to losing his grip on power. His long stint in the government seemed to be coming to an end, though he continues to wield enormous power even at this low point. Making things even more dramatic, his impending political demise seems to be brought on by his former acolytes who have worked for him in different capacities as ministers and advisers. They had all admired him once and accepted him as their leader. Now they seem to be rising up against him.

The first member of the group was Netanyahu’s former confidant and political partner, Yisrael Beitenu chair Avigdor Liberman. He has been campaigning against Netanyahu more than two years now. Liberman was followed by New Hope chair Gideon Saar, another close Netanyahu ally who seems to have eventually gotten fed up with the prime minister.

The newest member is Yamina chair Naftali Bennett, who is now playing a central role in this epic saga.

If Netanyahu does fall in the next few weeks, it won’t be the result of an ideological revolution shifting power from one bloc to the other. It will be the result of personal vendettas and growing disgust with Netanyahu among people clearly identified with the right. They are so fed up with Netanyahu that they are willing to prevent the formation of a right-wing government and even join forces with parties aligned with the ideological left just to get Netanyahu out.

It all came to a head May 4. After all his political maneuvering hit a dead end, Netanyahu was forced to return his mandate to form a government to Rivlin. Nevertheless, Netanyahu made no formal declaration of his failure, still trying to show that he was in control.

But in the emerging political reality, Netanyahu is far from in control. Having received the mandate from the president, Lapid will now take charge of the Knesset until a new government can be formed. Control of the Knesset will allow him to pass a series of new laws to prevent Netanyahu from running again for prime minister while under indictment for felony offenses.

It would be yet another inconceivable event in the chaotic reality that has been facing Israel for the past two years. As things seem now, even with the mandate to form the next government, and even though he heads the second-largest party in the Knesset, Lapid will not take over from Netanyahu. It will be Bennett, whose seven seats are essential to forcing Netanyahu out.

Lapid, who will likely take over from Bennett as prime minister in a rotation agreement, could be the one to cobble together the strangest and most polarized government Israel has ever seen. It will have one purpose: removing Netanyahu from office.

Back to rollercoaster that led up to this situation. On Monday, Netanyahu reacted to the impending crisis by leaving Bennett a recorded message, offering him a chance to be first to serve as prime minister in a rotation government if he would agree to join a Netanyahu government. Until then, he had hoped to engineer a government of his own with the help of defectors from the other parties or the outside support of the Raam Party. But all these efforts failed, if only because the far-right Religious Zionism party refused to cooperate with Arab Knesset members under any circumstances, despite Netanyahu's efforts to convince the party’s senior rabbis to get party leader Bezalel Smotrich to concede on this one issue.

Bennett’s response was quick and he offered it before the cameras. He plunged a metaphorical knife deep in Netanyahu’s heart when he said, “I never asked to be prime minister. You don’t need to convince me. Bring us a new government. We’re willing to help.”

There derision in his remarks was clear. Bennett seemed to enjoy pummeling his former political patron by stating unequivocally that Netanyahu doesn’t have a government. Since the last election, Bennett has made no effort to help Netanyahu form a right-wing government. He didn’t apply any pressure on Saar or reject the possibility of heading a government that includes components aligned with the left.

Netanyahu knew the truth. Bennett wanted him out of the way. Bennett long ago realized that he would have no room to grow with Netanyahu in the picture, so ever since the last election, Bennett and Saar worked hard to build the infrastructure for an alternative government with the change camp, and Bennett distracted Netanyahu with negotiations that lead nowhere until Netanyahu’s mandate ran out.

According to one political insider who spoke with Bennett a week ago, the Yamina chair realized that this was his golden opportunity to become prime minister before he even reached the age of 50 while achieving what so many before him tried to do but failed over the last decade. He would be the one to bring down Netanyahu. The same source told Al-Monitor that Bennett believes that once he is in the prime minister’s office, he will gain widespread public support. He will then be able to build up his own base.

Is this the end of the saga? Even now, while Netanyahu lies bleeding, he will continue to fight against the formation of this new government by pressuring Yamina's Knesset roster and other chicanery. Now that Netanyahu no longer holds the mandate, Bennett will face his first and most critical test.