New Hope leader Gideon Saar decided not to recommend a candidate for composing the next government, thus opening the way for Prime Minister Benjamin Netanyahu to take the first crack at the mission. 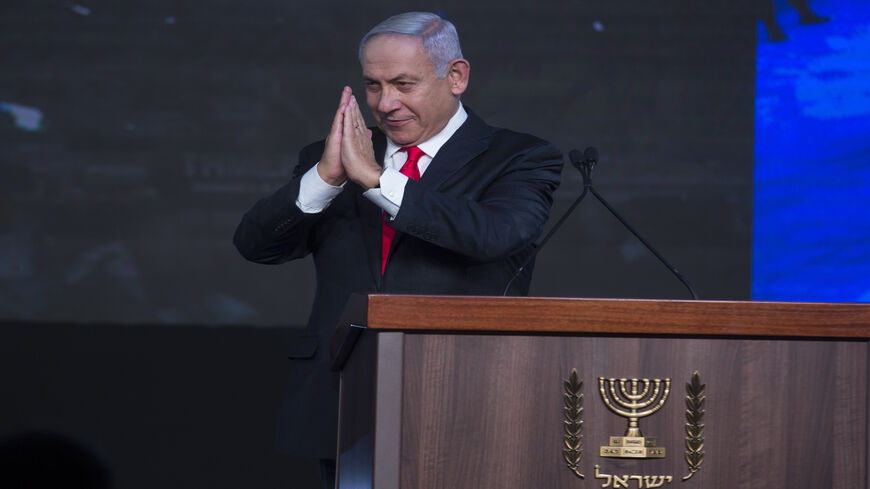 Israel is experiencing one dramatic day after another. Yesterday, April 5, President Reuven Rivlin consulted with representatives of the different parties over the best candidate to form a majority government. On the morning of April 6, Rivlin announced he had made up his mind, offering Prime Minister Benjamin Netanyahu a first go at the task.

While still short of a Capitol-style storming of the Supreme Court or Knesset ramparts, the fast-moving developments April 5, one of Israel's most dramatic days ever, appeared to set the stage for a similar event to the Jan. 6 assault on Congress. For Netanyahu, April 5 was one of the most challenging, exhausting days in his 12 consecutive years as prime minister.

At 9 a.m., Netanyahu presented himself at the District Court building in East Jerusalem for the opening of the evidentiary stage of his trial on corruption charges. At the same time, representatives of the parties elected on March 23 to the Knesset were lining up across town at the presidential residence in West Jerusalem to recommend to Rivlin whom he should task with forming Israel’s next government.

Outside the courthouse, Netanyahu opponents and supporters faced off. The opponents have been demonstrating against him week in, week out for almost a year. The fans, led by newly elected Likud Knesset member Galit Distel Etebaryan, were breathing fire and brimstone at the state’s legal institutions, accusing them of attempting to subvert the democratic process.

On April 5, Netanyahu was, at once, Israel’s incumbent prime minister, a defendant in a criminal trial and a candidate to form the next government. The split television and computer screens broadcasting the simultaneous events in Jerusalem was somewhat reminiscent of the famous split screens that riveted US TV viewers in June 1994 with an NBA final on one side and police chase after fugitive O.J. Simpson in his white Ford Bronco on the other. This week, Israel’s TV channels aired simultaneous scenes from a high-profile criminal trial and from a tense political race.

To round off this intense day, an agitated Netanyahu faced the cameras at his official residence in the late afternoon to deliver a blistering litany against Israel’s law enforcement authorities, accusing them of framing him in a bid to overthrow the government. “This is what an attempted coup looks like,” said Netanyahu.

Netanyahu has introduced a new schedule for the coming months — attending court sessions in the morning to hear the evidence against him on charges of bribery, fraud and breach of trust, and responding to the charges on live television in the afternoon. When the defendant also happens to be the prime minister, and half the public thinks that the attorney general and heads of the State Prosecution and Justice Ministry are the ones who should face urgent trials rather than Netanyahu, the result is a country on the verge of anarchy.

Even as Prosecutor Liat Ben-Ari delivered her opening argument against Netanyahu, the prime minister’s fate was hanging in the balance across town, as the parade of party representatives took turns meeting with Rivlin to present their recommendations. Of the 120 lawmakers, 52 recommended Netanyahu — nine short of the majority he needed to form a government. Yamina party Chair Naftali Bennett, with seven Knesset seats, recommended himself for the job, whereas Yesh Atid party Chair Yair Lapid was trying to pin down as many recommendations as possible.

Gideon Saar, the former Likud stalwart who heads the New Hope party, was the most crucial piece of the puzzle. Would he recommend Netanyahu or would he back Lapid and thereby allow him to form a power-sharing government with Bennett, who would serve as prime minister for the first half of the government’s term? Dubbed a “government for change,” such a constellation would put an end to the Netanyahu era once and for all.

At the very last minute, after vacillating throughout the day, Saar decided not to decide. His representatives did not recommend anyone to Rivlin. Lapid and Bennett have been conducting intense negotiations in recent days and the right-wing leader appeared willing to bite the bullet and lead such a “government for change," which would turn Netanyahu into history. However, Bennett is unwilling to head a government perceived as having center-left leanings given that the majority of such a coalition would be comprised of lawmakers affiliated with the political center-left. Bennett knows that if his opponents in the Knesset opposition label him a leftist, he can kiss his political career goodbye.

The gaps between Bennett and Lapid could in principle be bridged, but the two ran out of negotiating time before having to face the president. With the clock ticking, Saar was forced to decide whether he would violate his promise to voters and recommend Lapid as prime minister in order to receive the nod from Rivlin, take control of the Knesset, appoint a new speaker and complete the negotiations with Bennett — or sit out this round, allowing Netanyahu to take first crack at the task of putting together a government.

With Netanyahu now tasked with forming the government, he will likely be more desperate and dangerous than ever. He has accumulated a critical mass of enemies, most of them his former close advisers now sworn to rid Israel of his punishing presence. The first to walk away from him was former director of the prime minister’s office and his close ally Avigdor Liberman, who formed the Yisrael Beitenu party and is one of Netanyahu’s bitterest foes. Then came popular Likud politician Moshe Kahlon (who has since retired from politics), followed by Saar and Bennett.

Having been trampled and humiliated by Netanyahu on his way up, they are now waiting with knives drawn for him to tumble down. After four inconclusive elections in the past two years, Netanyahu still lacks a Knesset majority. However, his alternatives are far worse: standing trial from the opposition benches or as a private individual. With one path leading him to a dead-end and the other to a possible jail term, Netanyahu is willing to do anything, including everything, to break through the impasse and somehow form a government. This is the scenario most political actors in Israel fear, along with half the electorate.