Israel’s Prime Minister Naftali Bennett is eager to end the NSO affair and restart bilateral relations with France on a better foot. 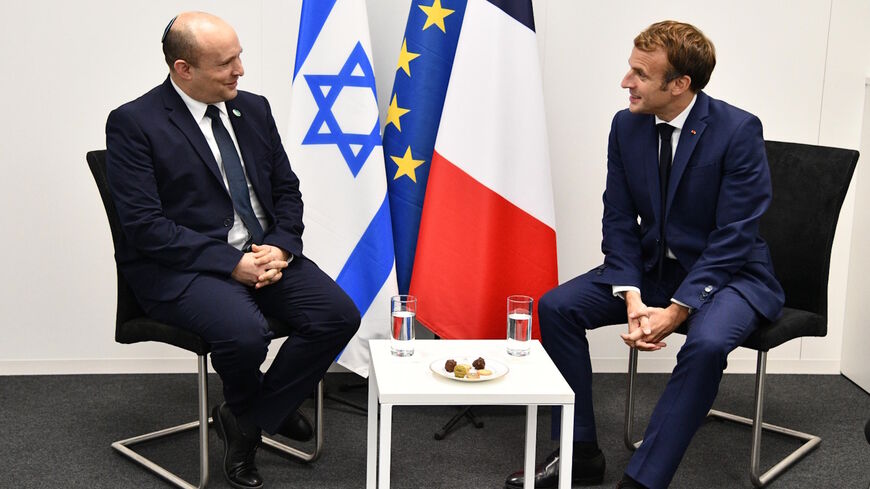 In Glasgow for the COP26 climate summit, Prime Minister Naftali Bennett met today with French President Emmanuel Macron. A statement issued by Bennett’s office after the meeting read, “The leaders held a good and warm private meeting. They discussed the global and regional challenges facing Israel and France, especially Iran's rapid progress in enriching uranium. Prime Minister Bennett noted that he attributes special importance to the large French community in Israel, which serves as a bridge between the two countries.”

Bennett’s statement did not mention the NSO affair, but Israeli diplomatic sources told reporters that alongside the Iranian threat, the spyware crisis was at the heart of the meeting between the leaders.

Publications last July exposed a database featuring thousands of phone numbers of politicians, decision-makers, journalists and activists worldwide, allegedly targeted by the Israeli company NSO’s Pegasus software. Among these numbers was also the private cell phone number of Macron, as well as of several French cabinet ministers and officials. Macron called Bennett personally at the end of July, to make sure the Israeli government were properly looking into the allegations.

The affair dampened Israeli efforts to reboot bilateral relations, after rather sour times during the Netanyahu era. Signaling to Paris that Jerusalem was taking the allegations seriously, Bennett dispatched Defense Minister Benny Gantz to meet with French Armed Forces Minister Florence Parly and other French officials to share the preliminary findings of his ministry’s investigation.

The visit of Gantz was just the first in a series of contacts between Israeli and French officials. The issue also came up during the late September visit in Paris of Emilie Moatti, the head of the Knesset’s subcommittee for foreign affairs.

The Israeli-French contacts included a secret visit in Paris last month by Israel’s National Security Adviser Eyal Hulata, who met at the Elysee Palace with Macron’s Diplomatic Adviser Emmanuel Bonne. Reportedly, Hulata presented to Bonne a proposal for ending the crisis. An important component would be for all future exports of Israeli cyberattack software to include a commitment not to target French phone numbers. Reportedly, Israel would also share with France its findings on the NSO case.

Hulata came back to Jerusalem without a final response. In their meeting today, Bennett apparently promised Macron again that Israel will be transparent with France on these issues. Reports quoted an unnamed Israeli diplomatic source saying that the two leaders agreed that the issue will continue to be treated discreetly and professionally.

Does this mean that the NSO affair has finally ended? Not so sure. Bennett’s government got off to a wrong start with Paris, and it might take some more time to mend this rift. This might explain why Foreign Minister Yair Lapid has not visited Paris yet – at least not officially.

The recent Israeli decision to advance the construction of housing units across the West Bank was also not helpful. The fact that France condemned it twice – on its own and in a joint statement with 11 other European countries – sent Israel a clear signal. After former Prime Minister Benjamin Netanyahu, Europe and France are eager to find a new political partner in Israel to renew dialogue. Still, Brussels and Paris estimate that it is up to Bennett’s government to make the first steps in proving its good intentions.