Israel's Defense Ministry has taken multiple steps to control the exportation of spyware, but the Pegasus affair continues to grow in Israel and abroad. 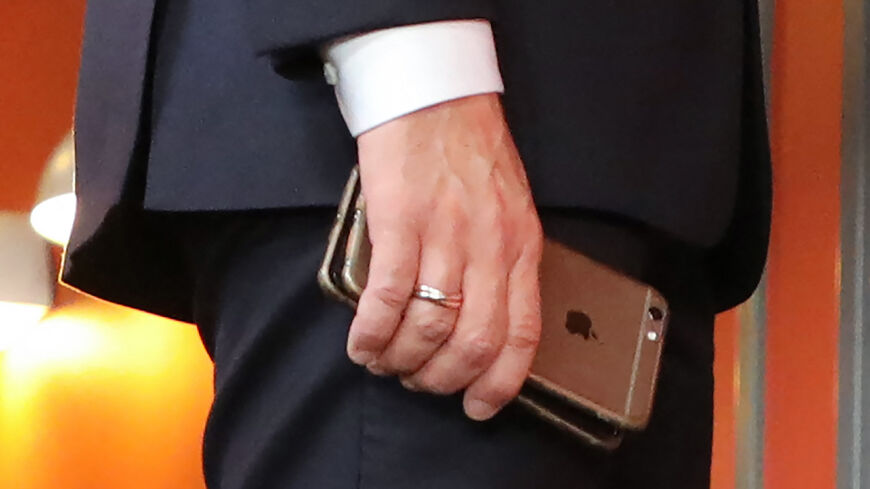 In this photo taken on Nov. 17, 2017, France's President Emmanuel Macron holds his mobile phones while talking with Slovakia's prime minister during the European Social Summit in Gothenburg, Sweden. - LUDOVIC MARIN/AFP via Getty Images

Pegasus developer NSO has warned the Israeli financial newspaper Calcalist today that it will take legal action if the outlet does not back away from reports published earlier this morning. Calcalist claims that Pegasus clients were able to erase records of some of their usage of the spyware. Two days earlier, Calcalist revealed a long list of politicians, activists and journalists the police allegedly spied upon by eavesdropping on their phones. Prime Minister Naftali Bennett vowed to get to the bottom of the issue while Public Security Minister Omer Bar Lev said he would seek a government commission of inquiry.

Israel's domestic Pegasus affair will not die down anytime soon and will continue to wreck havoc in Israeli politics and democracy while the country is still also grappling with the international Pegasus scandal at great diplomatic cost.

As the body responsible for issuing export licenses for sensitive cyber software (via the Defense Exports Control Agency), the Defense Ministry is the most involved within the cabinet in the international scandal. Defense Minister Benny Gantz has taken most of the heat from international human rights organizations and foreign governments. Eleven days after the scandal exploded in July and it was revealed that Pegasus had been used to hack the phone of French President Emmanuel Macron, Gantz traveled to Paris and met with his French counterpart Florence Parly.

Other Israeli security officials traveled to Paris in the months that followed. Jerusalem proposed conditioning all future sales of cyberattack malware on buyers agreeing not to use it with French mobile numbers. Similar contractural conditions excluding American phones have existed for several years now.

The proposal calmed French anger somewhat, but did not resolve the global issue. Last November, the Defense Ministry shrunk the list of countries eligible for importing Israeli-made offensive cyber-related products considerably. Last December, it came out that State Department phones, mostly in missions in Africa, had allegedly been hacked with the Israeli spyware. In reaction, the Defense Ministry said it would tighten regulations on exports of such products. The Defense Exports Control Agency published a new version of its “Final Customer Declaration,” which exporting clients are requested to sign as part of the contract.

Recently, claims emerged that the governments of Hungary and of Poland had used the Pegasus software to spy on their critics. Human rights organizations are pointing not only at these governments, but also at Israel. On Feb. 5, Israeli news outlets reported that the country has temporarily stopped issuing export licenses for technology that can be used for cyberattacks. It has also suspended renewals of such licenses for several Gulf states that have used the Pegasus software. The suspensions will reportedly be in effect until the ministry reviews the usage of Pegasus and other similar products.

In January, European Parliament member Sophie In 't Veld demanded a probe into the use of Pegasus in EU countries. Last night, she got her wish. In 't Veld told Al-Monitor, “Yesterday we reached an agreement in principle with the other large factions for an inquiry on the use of Pegasus in EU countries. We agreed to have a short discussion next week at the parliament, and then announce the launch of the probe. I mean, this is crazy. Clearly, we must look into this. When I first called for an inquiry last month, some of the other factions hesitated. Especially the Christians. But with the new revelations in Poland in this affair, everyone came on board. The Polish government might not get the majority needed for open a national inquiry, so it is important that we can. Same in Hungary. They are facing elections, so they have no appetite for investigating themselves now. True, we have no legal means to force people to come and [testify] before us, but parliamentary inquiries have their own dynamics, serving as hubs of information for people to reveal what they know, generating public discussion and applying pressure on governments."