A cyber watchdog report found the phones of at least 35 journalists and activists in the Latin American country were infected with the controversial Pegasus spyware. 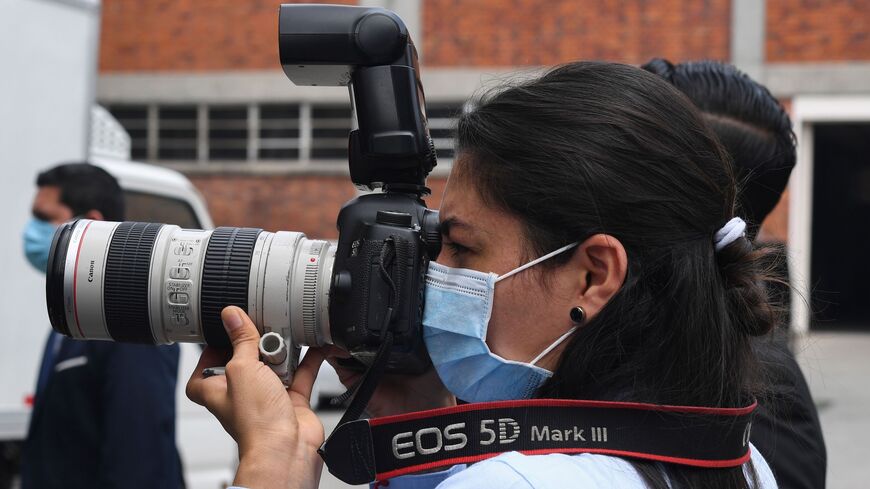 A photojournalist wears a surgical mask during a press conference in San Salvador on April 21, 2020. - YURI CORTEZ/AFP via Getty Images

The cell phones of dozens of El Salvador-based journalists and activists were targeted with the Israeli-made Pegasus spyware, according to a new digital forensic investigation that adds to the slew of scandals plaguing the NSO Group.

Researchers from the University of Toronto’s Citizen Lab and the cyber watchdog Access Now said Wednesday they had identified 35 cases of journalists and civil society members whose phones were infected with Pegasus between July 2020 and November 2021.

The hacks occurred when Salvadoran news organizations were covering sensitive issues involving President Nayib Bukele's administration, including an alleged secret pact made between the government and the MS-13 gang to cut down on violence.

The researchers did not find evidence to conclude El Salvador’s government was behind the hacking but said, “The strong country-specific focus of the infections suggests that this is very likely.”

“The government of El Salvador is in no way related to Pegasus and is not a client of the NSO Group,” Bukele’s communications director, Sofia Medina, said in a statement, adding that the government is investigating the possible use of Pegasus.

Reporters Without Borders ranked El Salvador 82nd in its 2021 World Press Freedom Index, citing harassment of journalists who investigate corruption and government finances, as well as Bukele’s rhetoric that the media is an enemy of the people.

Amnesty International, which independently verified Citizen Lab’s findings, called on San Salvador to conduct a thorough investigation into the hacking.

“The use of Pegasus for the surveillance of communications in El Salvador reveals a new threat to human rights in the country,” said Erika Guevara-Rosas, Amnesty’s Americas director. “This investigation shows that yet again, the Pegasus spyware continues to be abused in the world to unlawfully surveil journalists on a massive scale.”

The El Salvador probe is the latest scandal to embroil NSO, which was thrust into the spotlight in July when an investigation revealed that the company’s military-grade spyware had been used to successfully hack the smartphones of journalists, politicians, activists, heads of state and business leaders around the world.

In November, the US Department of Commerce added the Israeli spyware firm to its economic blacklist. The next month, reports emerged that the phones of at least nine State Department employees based in Uganda or whose work focused on the East African country were hacked with NSO’s software.