Reports in Israel say the government has set up an interministerial team to 'look into' the export of Israeli-made Pegasus software and allegation over its abuse against politicians and journalists worldwide. 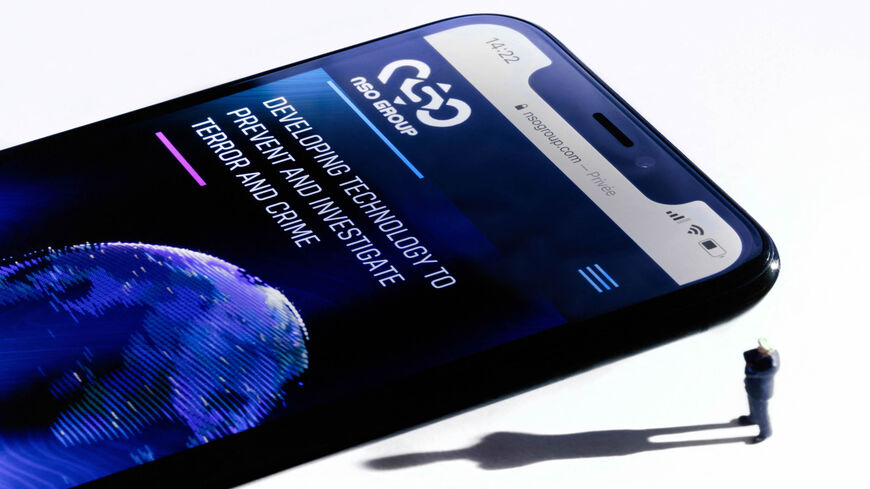 This studio illustration shows a cellphone with the website of Israel's NSO Group that features the Pegasus spyware, on display in Paris, France, July 21, 2021. - Joel Saget/AFP via Getty Images

Israel has not yet established a formal inquiry committee into the NSO Group affair, but the government has set up a senior interministerial team tasked with examining it. Israeli media said July 21 that representatives of the National Security Council met this week with experts from the Defense and Foreign Affairs ministries to examine possible consequences of the affair on the country’s diplomacy, international image and security export.

The interministerial team is expected to decide whether an official inquiry should be opened, which would examine the legal aspects of the affair, whether the NSO Group breached the extent of its export license, and whether the authorities kept a tight-enough control of the use of that license. In addition, future working methods should be examined and whether the Ministry of Defense should change its approval mechanism and requirements for issuing such licenses. Noteworthy, as of 2007, Israeli legislation requires that the export of cyberwarfare and cyberspying technologies be approved by a special agency that belongs to the Ministry of Defense, similar to the approval required for the export of weapons.

So far, the office of Prime Minister Naftali Bennett has refused to comment on the issue. Bennett did not address the affair when speaking at the Tel Aviv University Cyber Week Conference July 21. The Ministry of Defense said that Israel is studying the revelations on the Pegasus project. Defense Minister Benny Gantz said, “We approve the export of cyber products only to governments and only for legal use. Countries that purchase these systems must meet the terms of use.”

Still, unnamed officials in Israel admitted recently that the affair has become a source of embarrassment for the government. French authorities are now investigating reports by which the phone of President Emmanuel Macron was on the list of some 50,000 numbers of politicians and journalists chosen as possible surveillance targets by foreign governments through the Israeli-made Pegasus software. It is unclear whether Macron’s phone was indeed hacked.

The Washington Post reported July 21 that two members of Dubai’s royal family who had fled the country were selected as potential targets for the Pegasus spyware. The Guardian claimed in a report that the NSO Group had been given permission by Israeli authorities to try to sell the Pegasus software to the Saudis. An unnamed source told The Guardian about a meeting he attended in Cyprus in 2017, with NSO representatives and with Saudi businesspeople. The source claimed the Pegasus software was presented to the Saudis, who were amazed by its capabilities.

On July 21, Reporters Without Borders urged the Israeli authorities to suspend exports of cyberspying technologies. The group’s head, Christophe Deloire, said, “We call on Israeli Prime Minister Naftali Bennett to impose an immediate moratorium on surveillance technology exports until a protective regulatory framework has been established.”

The controversy over Israeli export of high-tech spying and combat technologies and its possible diplomatic damage is not new. Thus, for instance, Armenia had accused Israel of supplying drones to Azerbaijan. Last year, the assistant to Azerbaijani President Hikmet Hajiyev told the Israeli press that his country’s military has been using Israeli-made attack drones in the recent fighting in Nagorno-Karabakh.

Meretz legislator Mossi Raz has long been fighting for greater transparency and higher moral standards in Israeli cyber and arms exports. He tweeted July 21, "I have met today with Eli Joseph who has been protesting outside the Knesset for 48 days already, ever since he became aware of murders committed in Ethiopia. Joseph has been fighting for years against export of weapons to dictatorial countries and to countries involved in murders. He is right. I made a commitment to act vis-a-vis the government to halt security export that might be used in the killing of civilians."