The series of visits by Israeli security officials to Paris in recent months can only mean France is open for dialogue with the new government. 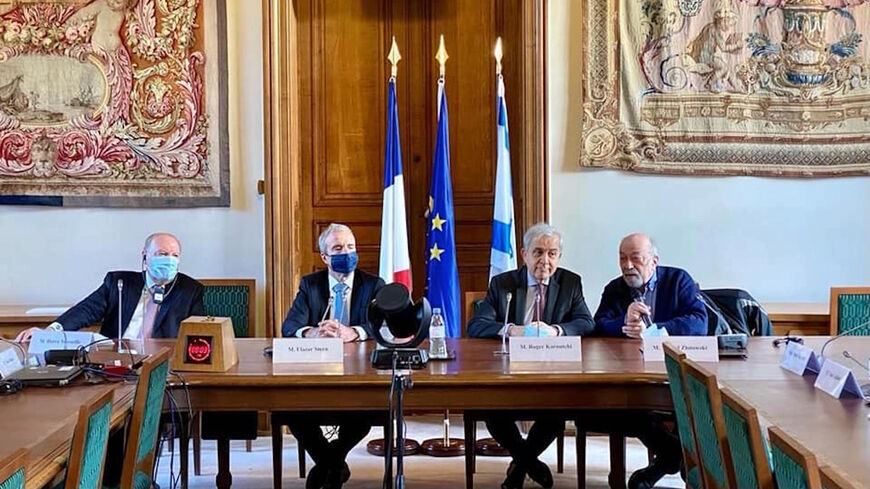 PARIS — A delegation of 14 senior Israeli figures paid a discreet visit to Paris last week, including former top officials at Israeli security agencies, security experts, IDF officers, three Knesset members and one minister. Intelligence Minister Elazar Stern had actually joined the delegation at the last moment, but it was his presence specifically that was important for the French.

The overall stated goal of the delegation, organized by the experienced European Israel advocacy group Elnet, was to interact with French decision-makers on strategic issues, and explain to them Israeli positions on issues such as the Iranian nuclear talks, Hezbollah in Syria and Hezbollah in Lebanon. The arrival of the delegation was organized to coincide with the International Paris Milipol expo, opening Oct. 19 and dedicated to homeland security.

Elnet prepared an impressive program for the delegation. On Oct. 21, for instance, they met with the France-Israel friendship group in the Senate. The group’s chairman, Roger Karoutchi, received them with all honors. Later, they met with members of the National Assembly’s foreign affairs committee, and with senior members of the prestigious Montaigne Institute. Researchers at Montaigne are often asked to advise the Elysee Palace on issues of national security.

The French interlocutors were eager to meet the Israeli delegation. Former Prime Minister Benjamin Netanyahu considered the European Union biased in favor of the Palestinians, and was not a very welcome guest in Paris. The new Bennett government is still a mystery to Paris because of the diverse combination of the coalition. French decision-makers are now wondering whether the new government will prove to be more flexible on talks with Iran and on curbing West Bank settlements.

Likewise, Israel’s prime minister office and its foreign ministry are also working to interact with the Europeans.

The first issue is the resumption of talks with Iran. Many in Jerusalem believe that a new JCPOA is inevitable. And if so, Jerusalem needs Brussels and Paris to advocate for its demands, especially on long-range missiles and Iranian global terror activities. The second issue is Hezbollah. Israel has been campaigning in recent years for the organization to be blacklisted in as many countries as possible. Germany agreed to blacklist it last year, but members of the delegation told Al-Monitor after their meetings that France would probably be the last European country to do so.

The 14-member delegation was just the most recent in a string of Israeli delegations and senior officials to arrive to the French capital since the establishment of the Bennett government.

Defense Minister Benny Gantz visited Paris July 27, following the NSO affair and French accusations against Israel. Paris charged that Israeli authorities did not sufficiently control the export of the Pegasus software, which foreign governments apparently used to hack into the phone of President Emmanuel Macron and some cabinet ministers and officials. While his short visit focused on this issue, Gantz's trip had apparently been prepared long beforehand. Thus, Iran, Hezbollah and Lebanon also came up in his meetings with senior French officials.

Head of the Foreign Affairs Knesset subcommittee Emilie Moatti arrived to Paris at the end of September, for a very successful visit. She met with many of the same people as the October delegation, both at the French Senate and at the National Assembly. She also traveled to Strasbourg, where she met representatives of the Council of Europe. In most of these meetings, the main issues were Iran, Hezbollah, Lebanon and the NSO affair.

But the most significant visit was probably that of National Security Adviser Eyal Hulata, who secretly met at the Elysee Palace some ten days ago with Emmanuel Bonne, the diplomatic adviser to President Emmanuel Macron. Again, the No. 1 issue was the NSO affair. Israel is reportedly proposing that all future sales of Israeli cyber-attack technologies will include a clause preventing the buyer from tracking French phone numbers.

The ball, it seems, is now in the French court. If Paris agrees to the Israeli proposal, the NSO affair will reach its end, on the Paris front at least. This could mean that France and Macron would be more receptive on other issues, especially Iran. Those with a good memory would recall that several years ago, at the very beginning of the nuke talks, under President Francois Hollande, it was France that made sure to bring up Israeli positions on Iran in the P+5 group talks.