Meeting in Paris with French President Emmanuel Macron, Foreign Minister Yair Lapid once again made the case for tighter sanctions on Iran. 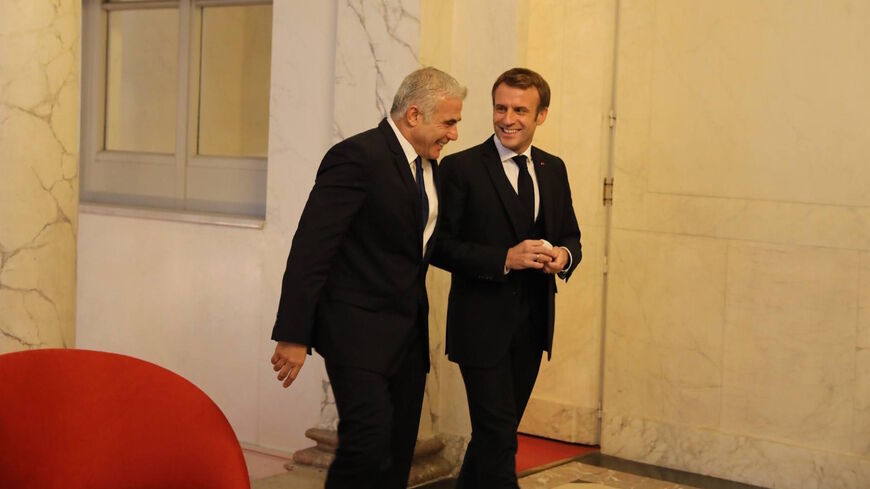 PARIS — Foreign Minister Yair Lapid met with French President Emmanuel Macron today at the Elysee Palace. The focus of the meeting was the resumption of the Iran nuclear talks in Vienna yesterday, Nov. 29, over Israeli protests. Lapid raised the same issue yesterday in London in his meetings with British Foreign Secretary Liz Truss and with British Prime Minister Boris Johnson.

Lapid’s office noted in a statement that the meeting with Macron was warm and friendly and that Lapid reiterated Israel’s stance that Iran is trying to stall for time to advance its nuclear program. Lapid also stressed the immediate need for the world powers to restore sanctions on Iran and to formulate what he called a Plan B.

Lapid said, "I am finishing now three days of talks in London and in Paris with British Prime Minister Boris Johnson, with British Foreign Secretary and with French President Emmanuel Macron about the Iranian nuke program, in parallel to the nuclear talks in Vienna. After many years, Israel’s stance is now being heard, and it is firm. Sanctions should not be removed. They should be tightened. Iran should be facing a significant military threat, because only that will prevent it from continuing its race toward nuclear [capabilities]. This race did not stop here, and it did not stop at the Vienna talks. Together with Prime Minister Naftali Bennett and with Defense Minister Benny Gantz, who will be traveling to Washington next week, we will continue laboring so that the world understands the extend of the Iranian danger."

Paris is not ready to backtrack on its support for the Vienna talks. In the statement published by the Elysee spokesperson’s office, Iran was not mentioned. It only said that the two leaders discussed the regional situation in the Middle East in general and security aspects in particular. The statement also said that Macron discussed the diplomatic actions he has taken toward stabilizing the situation.

Yesterday, Macron called upon his Iranian counterpart Ebrahim Raisi to return to fulfilling his country’s obligations under the 2015 Joint Comprehensive Plan of Action “without delay.” In the telephone conversation, Macron urged Raisi to engage in a “constructive manner” in the Vienna talks.

The meeting also touched on bilateral relations. Associates of Lapid noted that the meeting was productive, with an open dialogue between the two men, who have met several times in the past. Still, neither side commented publicly on an issue that has been disturbing bilateral relations for some time now: the Pegasus affair. At the time, Macron had demanded explanations from Israel about the NSO spyware used to track his personal phone. Later on, Israel offered measures to guarantee that no French phones will be spied on by Israeli cyber ware. Israeli sources now say the diplomatic crisis is nearing its end.