On his first trip abroad as prime minister, Yair Lapid met at the Elysée Palace in Paris with French President Emmanuel Macron to discuss Lebanon, Hezbollah and Iran. 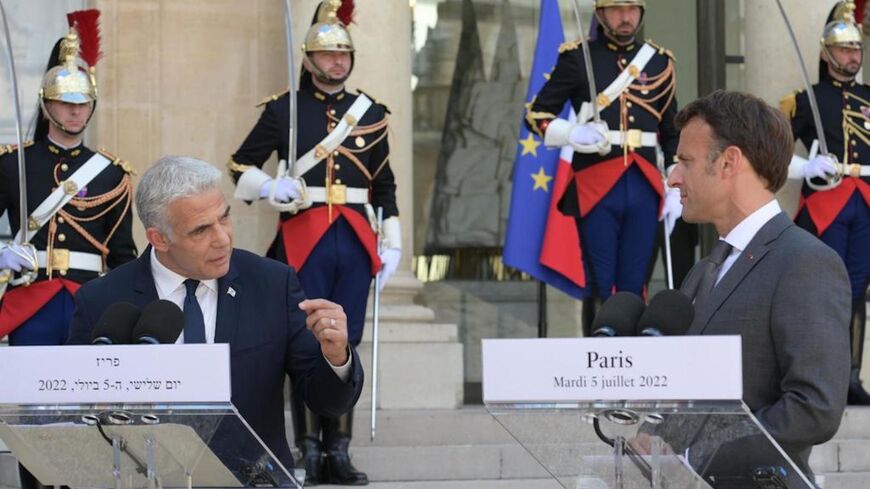 Prime Minister Yair Lapid met a short while ago in Paris with French President Emmanuel Macron. It was Lapid’s first official trip outside of Israel since taking office on June 30. The trip to Paris was scheduled a while ago, intended for then-Prime Minister Naftali Bennett. Upon taking over as premier, Lapid was keen to maintain this rendezvous with Macron, whom he reportedly considers a personal friend.

Lapid’s visit to the French capital was very short at four hours. He arrived in a chartered airplane accompanied by national security adviser Eyal Hulata. On his arrival at the Charles de Gaulle airport, he was greeted by the French Foreign Ministry head of protocol, French Ambassador to Israel Eric Danon and Israel’s envoy in France Yael German, who is also a close friend of Lapid. German had joined Lapid’s Yesh Atid party ahead of the 2013 elections and then served as health minister between 2013 and 2014. Lapid appointed German ambassador in his capacity of foreign minister.

Before embarking, Lapid commented on the possible nuclear deal with Iran and to drones recently sent by Hezbollah to an Israeli natural gas rig, saying, "We are presenting a united stance before the international community. A large part of the trip will be devoted to the nuclear deal with Iran. We will also address the repeated attacks on Israeli gas rigs. Israel will not agree to this type of attack on its sovereignty. Lebanon must restrain Hezbollah."

Reports read that Lapid planned to ask Macron to relay a message to Lebanon that Israel will not negotiate its maritime border while under threat from Hezbollah.

Upon Lapid’s arrival, German tweeted, "Prime minister of Israel, my dear friend Yair Lapid, Welcome to Paris on the occasion of your first diplomatic visit as premier. The prime minister will meet with French President Emmanuel Macron and discuss with him strategic issues essential to our two countries."

Speaking at a joint press conference in the courtyard of the Elysée Palace, Lapid said, "This year, with the war in Ukraine and the terrorism from Iran, we are reminded that not only does the democracy protect us, we must also protect democracy. Sometimes there is no choice but to use the force of war to protect peace. Israel and France are more then just friends; we are strategic partners. We have a host of economic and defense cooperation. Together, we are determined to expand and develop them, especially in the technological spheres."

Lapid continued, "Not only is France a leading country in Europe, it is also one of the E3 countries leading the negotiations with Iran on the nuclear deal. We may have disagreements about content of this agreement, but we do not disagree on the facts. The facts are that Iran is violating the agreement and continues to develop its nuclear program. Iran is hiding information from the world, enriching uranium above level allowed and has removed cameras from its nuclear sites."

Lapid said that given all these developments, the world must react. In 2018, he said, Macron was the first world leader to talk about the need for a new deal with Iran, one better defined and with higher international coordination to prevent Iran from becoming a nuclear threshold state. "You were right then, and you are even more right today. The current situation cannot continue as it is. It will lead to a nuclear arms race in the Middle East, which will threaten world peace," he warned.

"Anyplace that terrorism is found, Iran is never far away," said Lapid, addressing the exposure by Israeli and Turkish security services of an Iranian plot targeting Israeli tourists. He also mentioned the three Iranian-made UAVs sent by Hezbollah July 3 that tried to attack the Israeli natural gas rig Karish, not far from the Lebanese coast. It was an attempt by Hezbollah that also destabilizes Lebanon’s government and threatens the sovereignty of a country dear to Macron, he said, concluding, "Israel will not sit back and do nothing."

In his statement to the press, Macron called for “a return to political dialogue between Palestinians and Israelis.” Lapid, for his part, did not address the Palestinian issue.