In Germany, Lapid makes case for Israel’s position on Iran 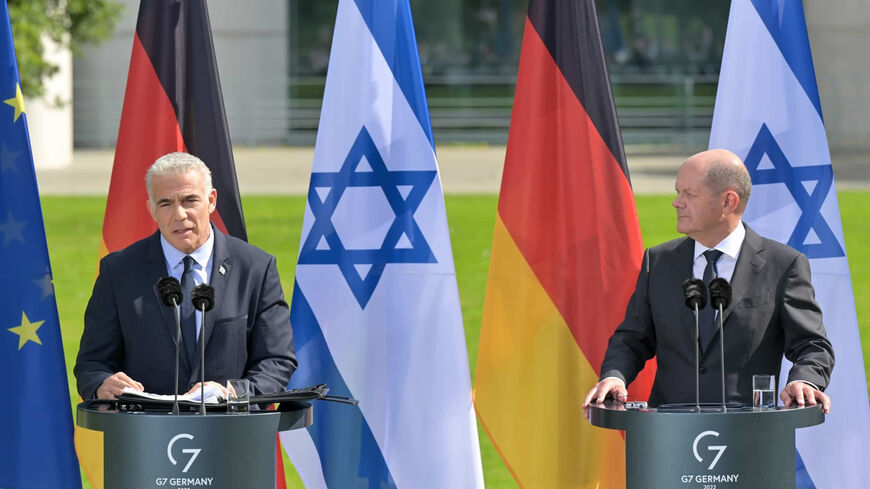 Israel’s Prime Minister Yair Lapid said Sept. 12 in Berlin that reviving the 2015 Joint Comprehensive Plan of Action (JCPOA) Iran deal would be a critical mistake that could generate a nuclear arms race in the Middle East and start new waves of terror attacks in the region. Lapid also said he provided German Chancellor Olaf Scholz with sensitive information on the Iranian nuclear program.

Speaking at a press conference after his meeting with Scholz, Lapid stated, "It is time to move past the failed negotiations with Iran. They cannot and will not achieve the goals we all share to stop Iran from getting a nuclear weapon. We discussed the need for a new strategy to stop Iran's nuclear program. A nuclear Iran will destabilize the Middle East and create a nuclear arms race that will endanger the entire world. Returning to the nuclear agreement under the current conditions would be a critical mistake. Removing sanctions and pouring hundreds of billions of dollars into Iran would bring a wave of terrorism not only to the Middle East but across Europe."

Commenting on bilateral ties, Lapid noted his visit “aims to conclude the final details of a strategic partnership agreement between Israel and Germany. It is a practical expression of Germany’s commitment to Israel’s security as a Jewish and democratic state, a commitment you [Scholz] reaffirmed when you took office. Israel will play a role in building Germany’s new defense force, mainly in the field of air defense.”

Ahead of Lapid’s departure to Berlin, Israel’s Ambassador to Germany Ron Prosor said, “The trip of the prime minister, in essence, is saying, ‘I traveled to Washington, I traveled to France, I traveled to the different countries of the Abraham Accords. I’m coming to Germany because this is the most substantial relationship we have in Europe.'”

Lapid’s official visit to Germany, shortly after the visit there of Israeli President Isaac Herzog, highlights Jerusalem’s hopes that Germany could stall or at least reshape to some extent the looming agreement with Iran. Diplomatic sources told Al-Monitor that newly appointed British Prime Minister Liz Truss is certainly considered an important ally of Jerusalem on this portfolio, but her delicate political situation and all the domestic issues she is confronted with could stand in the way of her getting involved actively on Israel’s behalf. As for France, President Emmanuel Macron said last week he was hoping a deal with Iran would be reached in the near future.

This evening, Gantz is scheduled to meet with UN Secretary-General Antonio Guterres to discuss the Vienna talks. After his meeting with Guterres, Gantz will hold a briefing for the envoys of UN Security Council permanent members and for the envoys of Abraham Accords countries (United Arab Emirates, Bahrain, Morocco and Sudan).

The fact that the prime minister and defense minister are simultaneously away from Israel is highly unusual, pointing to the urgency felt in Jerusalem over the Iran talks.

That being said, an unnamed Israeli senior official told the press Sept. 11 that Jerusalem does not believe Iran and the world powers will conclude a nuclear deal before the November midterm elections in the United States. The official was quoted as saying, “If the US doesn’t give into Iran’s demands, and Iran doesn’t give into US demands and the IAEA doesn’t close the probes, there will be no return to the agreement.”

Speaking at a conference in Herzliya Sept. 11, Mossad chief David Barnea also addressed the issue, saying Israel would not participate in the “charade” of a renewed nuclear deal between world powers and Iran. “The deal is based on Iranian lies. Iran has sought to build a nuclear weapon that endangers Israel’s existence. The deal will easily help them reach this goal under international legitimization,” argued Barnea, noting that even if a deal is signed, it would not provide Iran any immunity from Mossad operations.

Barnea said that the Mossad has thwarted in recent months dozens of Iran-inspired or Iran-affiliated terror plots against Israelis and Jews in Cyprus, Turkey and Colombia. He warned that a nuclear deal would provide Tehran with an immediate influx of $6 billion, in addition to at least $90 million annually — money that is likely to be used to finance terror activities.