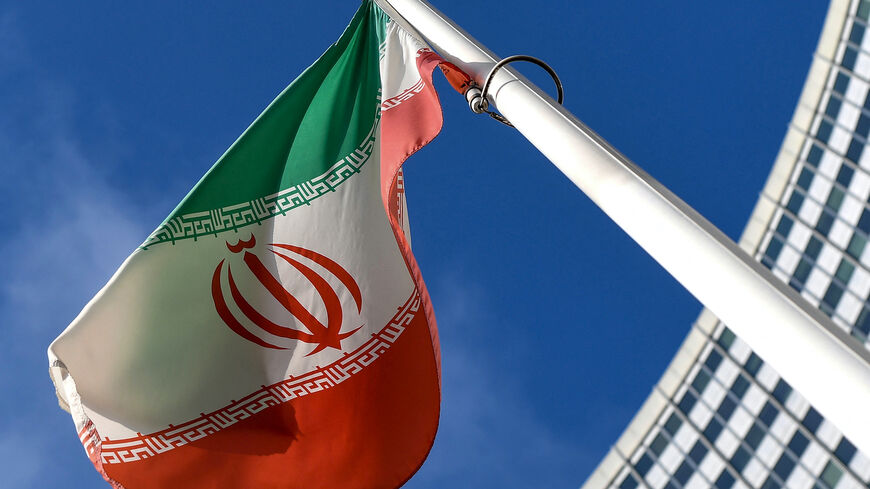 The Iranian flag is seen outside the International Atomic Energy Agency headquarters during the agency's board of governors meeting in Vienna on March 1, 2021. - JOE KLAMAR/AFP via Getty Images

“Even if a nuclear deal is signed, it will not give Iran immunity from Mossad operations. We won't take part in this charade and we don't close our eyes to the proven truth," Israel’s spy agency director David Barnea warned in a Sept. 12 speech.

“I make it clear to the Iranian regime: There will be no room for deniability. The Mossad and its partners will continue to expose those responsible for terrorist attacks and they will have no immunity, from the last of the operatives to the top decision-makers. We will not hound Iran’s proxies; we will persecute those in Tehran who sent them,” Barnea added, addressing a counterterrorism conference at Reichman University in a rare public appearance.

His comments affirmed Israel’s “octopus head” policy adopted by former Prime Minister Naftali Bennett. It shifted the focus to those in Tehran deemed responsible for terrorist attacks abroad rather than their proxy militias and agents. The comments by the Israeli government's main agent in its fight against Iran's nuclear program and terrorism highlight the escalating shadow war between the two regional powers.

Barnea's remarks came on the day Iran unveiled a new long-range “suicide drone,” the ARASH2, apparently designed to hit the Israeli cities of Tel Aviv and Haifa. (Jerusalem, which is also sacred to Islam, is apparently immune). According to a senior Iranian military official quoted by the semi-official Mehr news agency, "This drone, just like a wondrous bird, was built specifically to destroy the Zionist state that kills children."

Shin Bet chief Ronen Bar, who also spoke at the counterterrorism conference, said Iran's “influence is apparent wherever there is terror — in the Palestinian arena, inside Israel and in the cyber arena. Iran is not just a nuclear problem. It is the fundamental problem of the Middle East.”

These public remarks by top Israeli security officials and the Iranian response beg the question of how many stages are left in the escalation between Israel and Iran toward all-out war.

Since Bennett outlined his "octopus head" policy shortly after he took office in June 2021, many operations attributed to the Mossad have been reported inside Iran, including the Mossad’s alleged detention of a Revolutionary Guards agent on Iranian soil, his interrogation there and the publication of his recorded confession about Iran's plans to foment terrorism.

Several scientists and senior Iranian officials have met their death under tragic circumstances. Israel and Iran seem to be taking off the gloves in what may be the final act of the saga surrounding a return to the nuclear deal.

Barnea’s speech suggests that Prime Minister Yair Lapid, who took over from Bennett on July 1, is adhering to his predecessor’s policy. Israel has been applying pressure on the United States and other signatories of the 2015 nuclear agreement to prevent a return to that deal based on intelligence regarding Tehran’s plans to develop a nuclear weapon. It has also highlighted other contentious issues, such as Iran’s demand to remove the Islamic Revolutionary Guard Corps from the US list of terrorist organizations and to shut down three international investigations into suspected Iranian nuclear activity.

Unlike former Prime Minister Benjamin Netanyahu, the Bennett and Lapid government have not acted directly toward the US administration and other world powers, but have been using every tool at their disposal to dissuade them from acquiescing to Iran’s demands.

Israel’s efforts seem to have borne fruit. German Chancellor Olaf Scholz, who hosted Lapid in Berlin Sept. 12, said he does not see an agreement with Iran in the immediate future and added that Iran must be prevented from obtaining nuclear weapons.

Scholz’s comment reflect a recent Israeli assessment that agreement with Iran would not be reached prior to Israel’s Nov. 1 elections nor the US midterms on Nov. 8. US Secretary of State Antony Blinken echoed that assessment Monday, saying that Iran’s position “makes prospects for an agreement in the near term, I would say, unlikely.” He spoke as the board of governors of the International Atomic Energy Agency convened in Vienna and heard an equally gloomy assessment from Director Rafael Grossi.

This step back is a resounding political victory for Lapid. Netanyahu surely planned to attack Lapid and his government once an agreement was signed. He has now been disarmed.

About two weeks ago, when an agreement seemed imminent, Bennett tweeted, "During my tenure as prime minister, although it was very close, no nuclear agreement was signed with Iran. The same cannot be said about your term of office. … On your watch, signed. On mine, not signed."

Barnea’s comments followed his return from Washington, where he was said to have presented his American counterparts with fresh intelligence and assessments on Iran's nuclear developments and terror plots. The Mossad chief said the Israelis and Americans are "on the same page" when it comes to assessments of Iranian intentions and activity.

Addressing a Sept. 12 Jerusalem Post conference in New York, Defense Minister Benny Gantz presented a map said to show several Syrian military facilities being used to manufacture advanced weapons for Iran and its proxies in the region. Gantz added, "Iran is building terrorist facilities in Syria for its own needs and has recently begun to build advanced facilities in Yemen and Lebanon as well. The world needs to curb Iranian aggression and provide a credible and tangible military option."

This has been a good week for Israeli policy. The agreement, which Barnea had estimated would to be signed around now, is once again in intensive care. Its prognosis is unclear.