Visiting London while the Vienna talks resume, Israeli Foreign Minister Yair Lapid argued that Tehran has no intention of stopping its nuclear program. 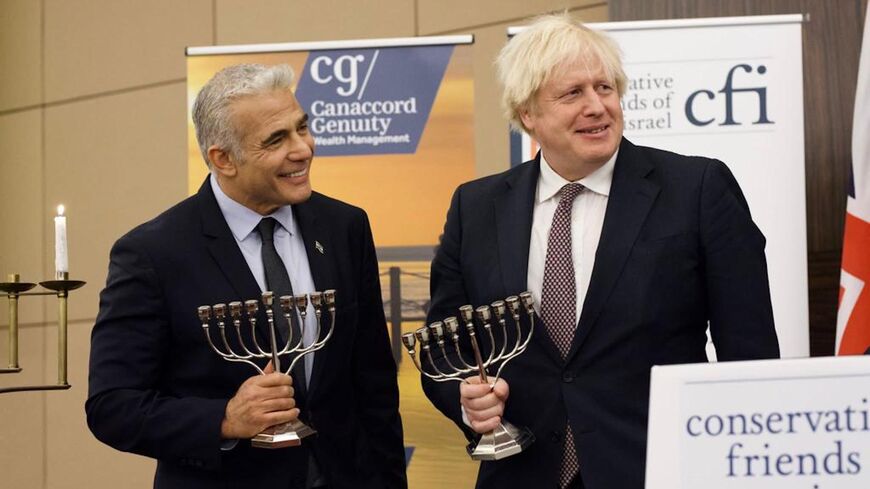 He went on, "The connection between Israel and Britain is not a symbolic connection, but a deep practical friendship between political and security partners who see eye to eye on most of the geopolitical issues that preoccupy our world. This friendship between us was most recently reflected in the British government's decision to proscribe all of Hamas as a terrorist organization. … Our friendship will be reflected in the coming months in our shared determination to prevent Iran from acquiring a nuclear weapon at all costs. Israel will always protect itself, but we know we are not alone.”

Lapid has been in London since yesterday. This morning, he met with his British counterpart Liz Truss to sign a memorandum of understanding for economic and security cooperation between the two countries.

Lapid said after the signing, “The Iranians are coming to these talks for only one reason: to get sanctions lifted. They need money. For Hezbollah, for the Revolutionary Guard, for their global terrorist network and for their continued race toward a nuclear weapon.” Lapid argued that the Iranian strategy in Vienna is to “play for time, earn billions from the removal of sanctions, continue to deceive the world and covertly advance their nuclear program. This is what they have done in the past and it is what they will do this time as well. The world must prevent this and it can prevent this. Tighter sanctions. Tighter supervision. Conduct any talks from a position of strength.”

Prior to this morning's meeting, The Telegraph published an op-ed by Lapid and Truss. The two countries will “work night and day to prevent the Iranian regime from ever becoming a nuclear power,” wrote the two ministers, adding, “The clock is ticking, which heightens the need for close cooperation with our partners and friends to thwart Tehran’s ambitions. Many fear the skies are darkening worldwide due to the pandemic, the threat of terrorism and hostile actors seeking the upper hand. But we believe that with the right approach, freedom and democracy will prevail over malign forces.”

Lapid is scheduled to meet tomorrow afternoon in Paris with French President Emmanuel Macron before returning to Israel. That meeting will also focus on the Vienna talks, though the two leaders are also expected to address the diplomatic crisis between the two countries over the NSO Group's surveillance software. Paris expressed anger after the news broke this summer that the Israeli-made Pegasus spyware was used on Macron’s phone. Since then, senior Israeli security officials have presented to their French colleagues a proposal to include a clause prohibiting spying on French phone numbers in all future deals that involve exporting Israeli cyber software.

Prime Minister Naftali Bennett warned today that the Vienna talks would offer Tehran a lifting of sanctions without Iran making any concessions in return. "Iran won't just keep its nuclear program; from today, they'll be getting paid for it.” Referring to reports earlier this week that Iranian forces shot protesters in Isfahan, he said, “Such a murderous regime should not be rewarded.”