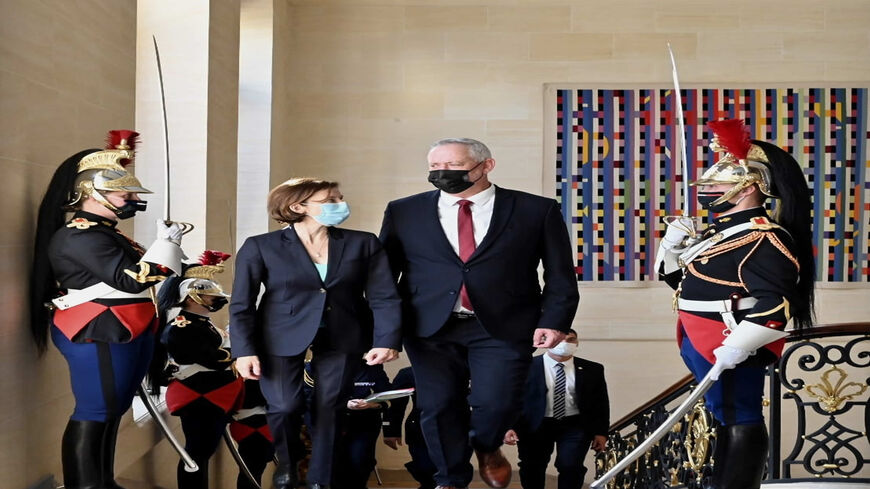 Israeli Defense Minister Benny Gantz met July 28 in Paris with his French counterpart Florence Parly. Israel’s Defense Ministry noted that the date for the Paris visit was set already a month ago, to discuss the Iranian file, Lebanon and other regional strategic issues. Still, with the NSO affair revealed last week, Gantz’s meeting with Parly focused on that.

On July 18, the Paris-based Forbidden Stories news site reported that NSO's spyware Pegasus was used in attempted and successful hacks and tracking of dozens of cellphones belonging to journalists, human rights activists and politicians in different countries. NSO has largely denied the claims.

Reacting to this initial publication on the Forbidden Stories, the Defense Ministry had noted that if it finds that NSO Group had violated the terms of its export licenses, it will take appropriate action. The ministry stated that Israel permits companies to export cybersecurity products to “government figures only for legal purposes and to prevent and investigate crimes and to combat terrorism. And this is dependent upon commitments regarding the end use/user from the purchasing country, which must abide by these conditions.”

French Le Monde and The Washington Post revealed later that the phone of President Emmanuel Macron appeared on a list featuring some 50,000 numbers allegedly tracked through the Pegasus Project. Reports claimed that Morocco was the one to target Macron; allegations rebuffed immediately by Rabat.

Following these revelations, it was reported that Paris will demand clarifications from Jerusalem on how the Israeli Defense Ministry permitted the export of the cybersurveillance tool Pegasus Project to foreign countries, to be allegedly used against Macron. Macron also spoke on the phone with Prime Minister Naftali Bennett July 25, asking to ensure that “the issue was being taken seriously.” Reportedly, Bennett responded that the allegations were from a period when he had not assumed office, assuring Macron that the required conclusions on the matter will be reached upon.

In their Paris meeting, Gantz relayed to Parly that NSO’s technology had not been used to hack into the phones of Macron or to track other French officials. A statement issued by his ministry after the meeting said, “Israel is taking the allegations seriously. [Gantz] noted that the State of Israel approves the export of cyberproducts exclusively to governmental entities, for lawful use and only for the purpose of preventing and investigating crime and counterterrorism. He also informed Minister Parly that officials visited NSO’s office today and that Israel is investigating the allegations thoroughly.”

Reports also said Parly spoke to Gantz about the clarifications “expected today by France and on which depend the trust and mutual respect of our two countries.” Parly, it was said, aimed “to find out what knowledge the Israeli government had of the activities of NSO’s clients, and what arrangements were put in place — and will be in the future — to prevent these highly intrusive tools being hijacked.”