The Donald Trump administration is repeating warnings to Israel to cancel a potentially lucrative port deal with China. 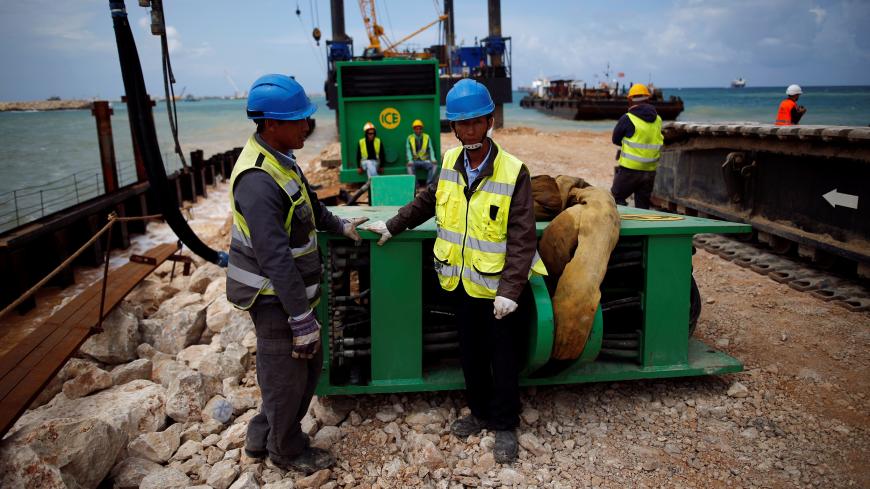 Chinese construction workers work during a media tour of the construction of a new port in the southern city of Ashdod, Israel, April 12, 2016. - REUTERS/Amir Cohen

As the Donald Trump administration ramped up its self-declared "trade war" with China this week, Pentagon officials are expressing increasing concern that Israel and other Middle East nations could be falling deeper into Beijing’s orbit.

Speaking in Washington last week, the Defense Department’s top Middle East policy official said the US military is “highly attentive” to Chinese trade and infrastructure investments with Israel. The Pentagon has repeatedly raised issue with Israel’s decision to allow the government-owned Shanghai International Port Group to strike a $2 billion deal to operate Haifa Port by 2021, a port of call for the US Navy’s Sixth Fleet.

“While we are not asking Israel to avoid dealing with China entirely, we have open discussions with all our closest allies and partners on the national security implications of Chinese investment,” Deputy Assistant Secretary of Defense for the Middle East Mick Mulroy said in a statement last week. “The openness of the US and Israeli economies is a strength to our countries, but malign actors can take advantage if we are not cautious.”

China has also proceeded with investments in Tel Aviv’s light rail system, which transits Israel’s defense headquarters at Kirya and a port in the south near Israel’s naval base at Ashdod, which has prompted warnings from US lawmakers and in the editorial pages of American newspapers in recent months.

Experts have indicated that a possible Chinese presence at the facility could allow the People’s Liberation Army Navy to monitor US ship traffic and maintenance, and pose cybersecurity threats.

“Israel has had low entry barriers relative to other US allies since 2013,” said Shira Efron, a policy researcher at the RAND Corporation. “There’s no reason why Israel shouldn’t have flourishing business with China, but the key question is whether you want your infrastructure run by a foreign country.”

But the Israeli government added a classified security appendix to the Haifa deal, Efron said, which defines the authorities of the Israeli security services in regard to the port, and limits sensitive roles at the facility to citizens with top-secret clearances.

The US Navy has already said it plans to reconsider long-standing operations at Haifa once the Chinese handover occurs, and the Senate included a provision in its must-pass annual defense authorization bill to urge Israel to consider security implications surrounding foreign investment, in response to the move.

In a report published in April, the Center for a New American Security rated the Haifa terminal, which is expected to be the largest such facility in Israel when complete, as “sovereignty eroding,” suggesting that the Chinese-owned company could extend its lease on the port due to a lack of competing bids. The Shanghai International Port Group was the sole bidder for a 25-year contract on the port in 2015.

The fresh concerns about the project, which Israel is currently reviewing, come as the Trump administration escalated an economic tit-for-tat with China last week, with the American commander in chief slapping a new 10% tariff on $300 billion in products from Beijing, which caused US stocks to slip on Monday. The Treasury Department also designated China as a currency manipulator.

The Haifa deal comes amid a spate of increasing ties between US allies in the Middle East and China, which have sparked concern in the Pentagon and other American government agencies. China pledged $23 billion in loans and aid to Middle East states in 2018, Mulroy said, and added $28 billion in infrastructure investments.

Enhancing bilateral ties with Arab countries also appears to be a personal goal for Chinese President Xi Jinping, who spoke to the issue at a regional forum last summer, when the nation’s Foreign Ministry reported that he referred to Middle East states as “natural partners” in the Belt and Road initiative.

The Pentagon said China rang up $10 billion in weapons sales from Middle East customers from 2013 to 2017. Beijing “faces little competition” for armed drone sales in Iraq, Saudi Arabia and the United Arab Emirates because of US membership in a handful of weapons-control regimes.

While the Haifa deal so far appears to be rooted in economic interests, China also runs an anti-piracy initiative off of the Gulf of Aden and has in the past established bases and militarized areas that appeared to be economic in nature, experts say.

"China often says one thing but then does another,” said Rush Doshi, a specialist in China’s military at the Brookings Institution. “China said they'd never have an overseas base, and now they have one in Djibouti. They weren’t supposed to militarize the South China Sea, but arguably they have. So when China’s ambitions and behavior so often contradict its rhetoric, it stands to reason you should be concerned.”