The Donald Trump administration is worried that China is capturing a larger role in a Middle East arms market that the United States has traditionally dominated. 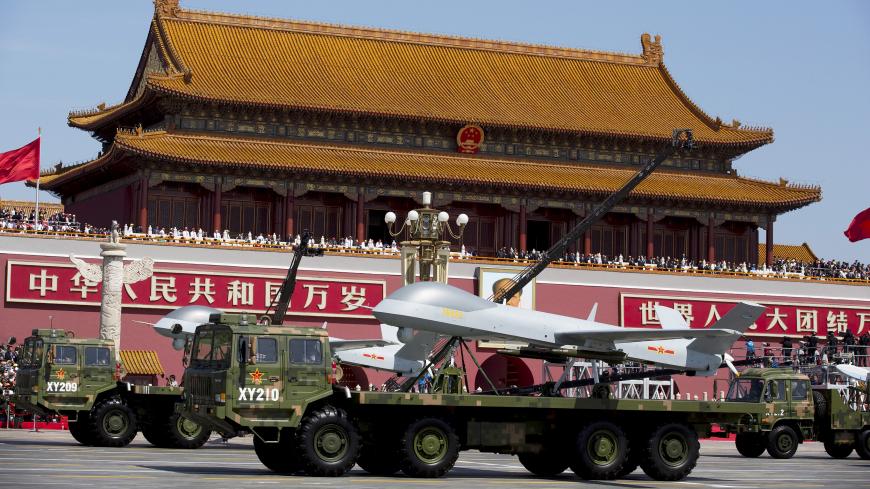 The Donald Trump administration is worried that weapons carrying the “Made in China” label are becoming ubiquitous on Middle East battlefields, a Pentagon report revealed earlier this month.

In increasing numbers, traditional US allies are turning to Beijing for technologies that the United States is constrained from exporting as a signatory of international arms control treaties. The Pentagon is increasingly concerned that China’s growing arms sales give the country more clout to secure an economic and military foothold and relationships with US allies in a region where defense officials often control the purse strings.

"It's potentially a tool for them to develop closer defense and military ties, particularly for future access,” Assistant Secretary of Defense for Indo-Pacific Affairs Randall Schriver told Al-Monitor at a recent Pentagon briefing. “China is less disciplined, and so there's a proliferation risk as well to regimes that we would regard as not necessarily responsible.”

The Pentagon said China rang up $10 billion in weapons sales from Middle East customers from 2013 to 2017. The country “faces little competition” for armed drone sales in Iraq, Saudi Arabia and the United Arab Emirates because of US membership in a handful of weapons-control regimes.

As Saudi Arabia and the United Arab Emirates have expanded their military presence into the Red Sea and Africa, Chinese-made drones have become a pervasive indicator of their reach, with UAE-piloted Wing Loong II drones spotted flying over the Libyan capital of Tripoli in recent days. In Yemen, the Iran-backed Houthis have had some luck shooting down the Beijing-built drones, cutting down four so far in 2019, according to raccording to reports.

Meanwhile, the Trump administration has sought to facilitate the sale of armed drones, floating a white paper obtained by Defense News that would make it easier for the State Department to license the sale of the weapons. The proposal would potentially allowing deals for aircraft that travel slower than about 400 miles per hour.

But the White House's recent arms exports reforms stopped short of including that provision. Requests from Jordan and the UAE to buy armed Predator drones appear to have stalled, even as the White House invoked security threats from Iran to go around lawmakers to provide several billion dollars’ worth of munitions sales to the UAE and Saudi Arabia last week.

“It’s also just our system of government where there are a lot of different checks and balances and the role of Congress isn’t very well understood,” said Becca Wasser, a policy analyst with the RAND Corporation. “In countries in the Middle East, parliaments don’t necessarily have that kind of power.”

Yet the rules have not killed the demand for US-made armed drones.

“There’s this obsession with armed drones in the same way that there’s an obsession with new shiny toys that come out,” Wasser said. “When you think about what the Emirati and Saudi needs are, what they would actually need are unarmed drones [for intelligence, surveillance and reconnaissance] instead of more things that can drop bombs.”

The State Department certified a sale of Scan Eagle surveillance drones to Saudi Arabia in April, as the Trump administration allowed US companies to sell drones not limited by international treaties directly to foreign countries.

Despite China’s success, its deepening involvement in the Middle East oil and arms trade could leave it more exposed to the region’s volatile marketplace, experts say.

“Oil curse shifting core dynamic to Beijing,” Amy Myers Jaffe, a fellow at the Council on Foreign Relations in New York, tweeted earlier this month. “China now is one who needs to recycle petro-dollars and most exposed to OPEC cuts and disruptions caused by armed conflict in Mideast.”

China in the Mideast
Defense/Security cooperation