Drones used by Iran-backed militias are coming from China, US says

Senior US official accuses Beijing of playing both sides in the Middle East’s race for drone technology. 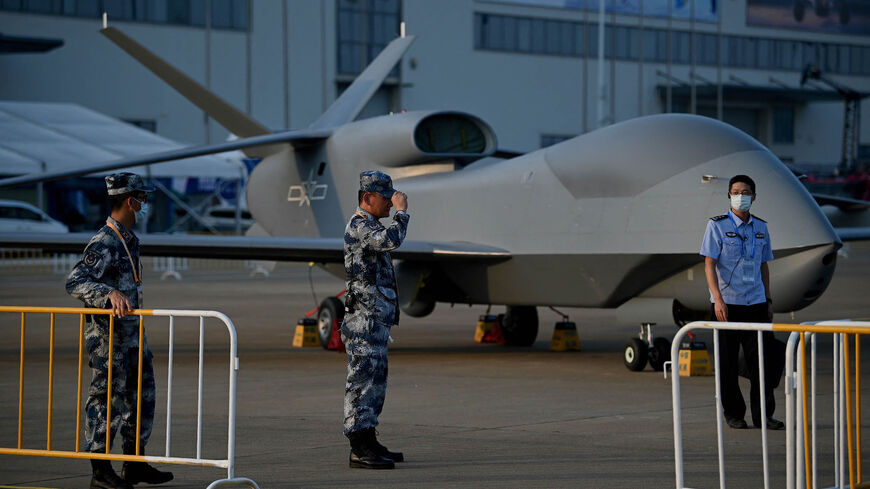 Unmanned drones fired by Iran-backed militias at targets across the Middle East in recent years, sometimes with lethal effect, are being supplied from China, a senior US official revealed.

Barbara Leaf, the State Department’s top Middle East policy official, called it “an irony” that Beijing has been pushing sales of its military drones to Arab Gulf states while doing nothing to stem the flow of other Chinese-made drones to militias backed by Iran in the region.

“Those UAVs that those proxies use, they’re Chinese,” Leaf told members of the Senate Foreign Relations Committee on Thursday. “Now they’re not provided by the state, but the state does not attempt to curtail that flow.”

Leaf offered no further details of the transfers. Neither the Chinese Embassy in Washington, the US State Department nor the US National Security Council returned Al-Monitor’s requests for comment by publication time.

Why it matters: Iran-backed groups have claimed credit for deadly drone attacks on a variety of targets, from oil facilities in Saudi Arabia and the United Arab Emirates (UAE), to an Israeli-owned container ship, to bases housing US troops in Iraq in recent years.

Precision drone and missile strikes by Iran and its proxies have led Arab states to seek air defense support and offensive projectile weapons of their own. Leaf suggested to lawmakers today that China is playing both sides of the tensions by spreading drone technology “across the region helter-skelter," an approach she described as "a huge problem."

For the latest news and top analysis on all things security and defense, subscribe to Jared Szuba's weekly Security Briefing

Iran is not thought to have purchased Chinese military drones, but has its own indigenous fleet, which it has sought to export to other countries.

Riyadh has purchased China’s Wing Loong II and CH-4 drones starting in 2014, while the UAE is thought to have obtained the Wing Loong in 2011. Iraq and Jordan are also believed to have a small number of CH-4Bs. Algeria, Egypt and Pakistan have also reportedly acquired military drones from Beijing.

Leaf emphasized on Thursday that the United States maintains a firm lead over China’s growing strategic influence in the Middle East due to Washington’s unmatched defense partnerships, with which she said Beijing cannot compete. But she admitted China has gotten “more than their foot in the door” in the region’s armed drone market, in part because US weapon sales come with conditions.

The Trump administration loosened restrictions on US armed drone transfers abroad in a belated attempt to catch up, and signed off on plans to sell 50 stealth F-35 fighter jets and 18 MQ-9B drones to the UAE shortly before ceding power early last year.

The Biden administration froze those sales after coming into office. Leaf acknowledged to lawmakers today that Abu Dhabi’s prior deal with China’s state-owned Huawei for a 5G network was one of “several” issues that led the new administration to reconsider the transfers.

The current White House further halted all sales of weapons that could be used for offensive purposes to members of the Saudi Arabia-led military coalition fighting in Yemen’s brutal civil war, but has continued sales of defensive weapons, albeit not at the pace which Gulf leaders have hoped for.

In March, a Saudi firm signed a deal with one of China’s largest state-owned defense electronics manufacturers to establish a drone factory in the Gulf kingdom, reviving a similar proposal resulting from King Salman bin Abdul-Aziz Al Saud’s visit to China in 2017.

Leaf on Thursday expressed hope that Arab Gulf states would reconsider their dealings with Beijing because, she alleged, “China is getting away with murder, in some terms.”

The context: The rhetorical broadside from Washington came just hours after China launched ballistic missiles over Taiwan and into the waters of Japan’s exclusive economic zone for the first time on Thursday amid a show of force in response to US House Speaker Nancy Pelosi’s (D-Calif.) visit to Taipei.

It also follows President Joe Biden's trip to Saudi Arabia last month, which White House officials intended as a gesture to invite Arab Gulf leaders closer into Washington’s fold as the US gears up for strategic competition with adversaries Russia and China.

The United States has played a central role in supporting Middle East states for decades, largely to ensure the free flow of oil to the global economy.

China is now more dependent on oil from the Persian Gulf than is the United States, which has reduced its military footprint in the region dramatically over the past few years. Overall, Chinese investment in the Middle East and North Africa has grown from $15.2 billion in the year 2000 to some $284.3 billion last year, Leaf told lawmakers, while US investment has grown $63.4 to $98.4 billion over the same span.

Leaf said today that the US government considers Chinese firms' purchases of civilian ports in the region to serve as possible cover for military and intelligence activities.

Strings attached: During the hearing on Thursday, Sen. Chris Murphy (D-Conn.) urged Leaf that the United States “should be careful to lower our standards" for arms sales to the region "simply because the Chinese have no standards.”

She agreed, saying US drone sales should be pursued “under careful, scripted, clear rules of the road” and approached on “a case-by-case basis," but offered no hints as to whether the administration would reconsider any outstanding requests from Arab leaders.