The new US policy will allow the United States to export armed drones after reinterpreting a 35-nation agreement aimed at limiting the proliferation of rocket-based weapons. 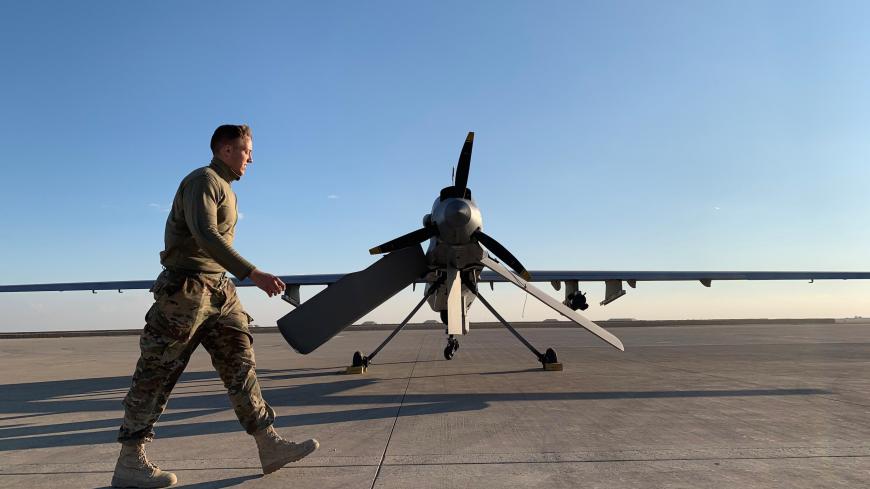 A picture taken on Jan. 13, 2020, during a press tour organized by the US-led coalition fighting the remnants of the Islamic State shows a member the US forces walking past a drone in the Ain al-Asad airbase in the western Iraqi province of Anbar. - AYMAN HENNA/AFP via Getty Images

US President Donald Trump has loosened restrictions on Washington’s ability to sell armed drones to foreign governments amid concerns about China’s defense relationships in the Middle East.

The United States has now formally changed its interpretation of the Missile Technology Control Regime (MTCR), a 35-nation agreement aimed at limiting the proliferation of rocket-based weapons such as ballistic and cruise missiles as well as armed drones.

The new US policy will allow the United States to export armed drones that fly less than 800 kilometers (500 miles) per hour. Such weapons sales are subject to a “strong presumption of denial” under the 1987 MTCR agreement, which categorizes the drones alongside smaller cruise missiles as “category-1” weapons that can carry up to a 500kg payload as far as 300km.

The Trump administration has sought to modify that designation since at least 2017 in order to compete with China’s armed drone sales to Middle Eastern governments that typically buy American weapons. China is not a party to the MTCR.

R. Clarke Cooper, the head of political-military affairs for the State Department, announced the policy change in a Friday statement, saying it would not affect the administration’s stance on other restricted weapons, including cruise and ballistic missiles.

The Trump administration argues that a boom in drone technology over the past two decades has made the inclusion of unmanned aerial systems in the category obsolete, pointing out that drones pose no current risk of carrying nuclear payloads.

“That benchmark has not, in some respects at least, held up very well over time,” Assistant Secretary of State for International Security and Nonproliferation Christopher Ford said at a think tank event in Washington Friday. “In other words, the MTCR is in danger of becoming out of date,” Ford said.

The move is also likely to be a boon to manufacturers of armed drones, such as General Atomics, which makes the MQ-9 Reaper. Cooper said on Friday that new sales enabled by the policy would mean more American jobs.

Senator Bob Menendez of the Senate Foreign Relations Committee slammed the policy revision, saying the Trump administration had “once again weakened international export controls on the export of lethal drones by this action.”

“It is important to appreciate that the Missile Technology Control Regime (MTCR) originally adopted stringent export controls on exports of advanced drones at the urging of the United States,” Menendez said in a statement Friday.

The revision comes amid increased scrutiny from Congress over the Trump administration’s arms sales to Saudi Arabia. It also comes as the Pentagon is increasingly voicing concern about China’s emerging influence in the Middle East.

The US Navy’s Fifth Fleet commander, Vice Adm. James Malloy, said last week that Beijing poses no military threat to US interests in the region now, but that economic inroads such as arms exports may lead to such a situation in about 15 years.

“We see signs of that: China is already on the record saying that they want to end the weapons embargo on Iran. … That concerns me as a global partner,” Malloy said at a virtual event at the Middle East Institute last week.

The State Department initially hinted it was reviewing its conventional arms transfer policy in 2017 after China struck a $60 billion deal with Saudi Arabia to build a drone factory in the Gulf kingdom, the first of its kind in the region.

Saudi Arabia and the United Arab Emirates have bought and deployed Chinese Wing Loong drones in combat in Yemen and Libya, respectively, amid hikes in Gulf monarchies’ defense spending in recent years.

Egypt and Iraq also have purchased China’s CH-4 drone. Though Beijing’s less expensive armed drones are considered less reliable, they are not subject to export restrictions.

Asked how the policy change may affect human rights in the region, Cooper replied that all sales will continue to be assessed individually, offering few specifics. “It’s incumbent upon the United States that we ensure that the systems we sell are used responsibly and will not threaten our interests or those of our allies,” he said.

Ford echoed Cooper’s statement that the revision would not affect the Trump administration’s position on sales of other MTCR-restricted weapons — ballistic and cruise missiles, hypersonic vehicles and drones that can fly faster than 800 kilometers per hour.

“Those systems will continue to be non-exportable, except perhaps on rare occasions,” Ford said Friday.

Pressed to elaborate, he refused to rule out that the United States may export those weapons in the future, pointing out that the MTCR does not explicitly prohibit such sales.

“If it happens it will be a very rare occasion,” Cooper said. “By its nature it’s hard to predict exactly what circumstances fit into that category.”