Israeli and Chinese genomics companies plan to provide a COVID-19 testing lab for the Gaza Strip, but in the meantime, there are no test kits to be had there. 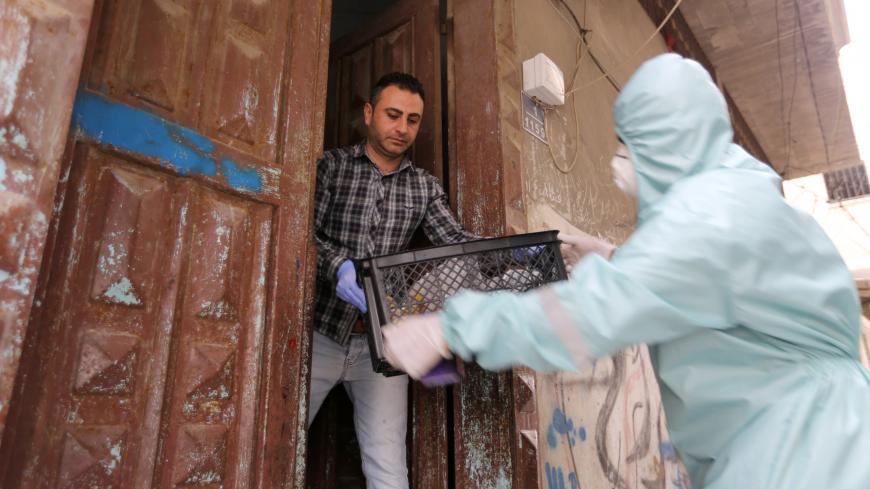 A Palestinian man at his home receives from a delivery worker a crate containing sanitized vegetables amid concerns about the spread of the coronavirus in the central Gaza Strip, April 5, 2020. - REUTERS/Ibraheem Abu Mustafa

GAZA CITY, Gaza Strip — The Gaza Strip has run out of coronavirus test kits but will soon have a new laboratory capable of conducting as many as 3,000 tests a day.

Gaza Health Ministry Undersecretary Youssef Abu al-Rish said the 300-square-meter (3,229-square-foot) lab is expected to be assembled and equipped by April 16. The lab will be a joint effort of Beijing Genomics Institute and Israel's AID Genomics.

Ayman al-Halabi, labs department director at the Gaza Health Ministry, spoke with Al-Monitor, stressing the need for this laboratory, particularly since the ministry’s main lab in Gaza ran out of testing kits April 8. Since early 2020, the World Health Organization had supplied the Gaza Strip with 192 kits, with each pack able to perform 96 tests, including one kit from the Health Ministry in the West Bank, he said.

“The Gaza Strip ran out of kits, as 1,984 tests were performed on citizens placed in quarantine April 5-6. These citizens started returning home after testing negative and spending 21 days in the quarantine centers,” he added.

He noted that 177 samples taken from citizens in quarantine are still in the lab awaiting testing.

"The two [people] did not show symptoms. We discovered that they were infected after tracing the list of people who were in close contact with them," Halabi said. "Identifying infected cases before any symptoms were shown is an achievement for the Health Ministry [in Gaza], which has the [goal] of preventing the virus outbreak in the Gaza Strip by imposing quarantines and conducting tests before any symptoms appear.”

Commenting on whether there are positive cases not in quarantine, Halabi said, “I can neither confirm nor deny this as long as no symptoms were shown, and tests on citizens who are not in quarantine were not made.”

Before the test kits ran out, samples taken from infected or quarantined people went to the Gaza Health Ministry’s lab in the Rammal central clinic. It is the only lab for viral diseases in Gaza. Halabi said, “The viral testing division in the ministry’s central lab was rehabilitated. The tests are done with two PCR instruments [DNA amplifiers], including one we borrowed from the University College of Science and Technology, and the results are accurate.”

Halabi stressed that the positive samples were tested again at the labs of the West Bank Ministry of Health in Ramallah, the lab of Al-Aqsa University in Gaza and the lab of a third party he did not identify. All these labs have confirmed that the conducted tests were positive, he said.

But on April 6, Tarif Ashur, spokesman for the Health Ministry in the West Bank, said in a press release on COVID-19 that the Gaza Health Ministry was not providing the West Bank with any details or reports on coronavirus cases in Gaza. For his part, Kamal Chakra, director-general of primary care at the Ramallah ministry, called on the Gaza government to send the samples to be tested in the West Bank’s labs instead of the Israeli ones.

The Hamas daily newspaper Al-Resalah reported April 6 that the Ramallah ministry took all of the financial assistance that was supposed to be delivered to a Gaza-West Bank joint technical committee formed to fight the virus.

A well-informed source at the Ramallah ministry told Al-Monitor on condition of anonymity, “The Hamas government seemingly wants to obtain its share of the assistance to the health care sector in cash. Also, resorting to Israel to have the samples tested, although they can be tested in Ramallah, raises many questions.” (This could not be independently verified by Al-Monitor.)

“The long wait destroys the samples. Based on that, the results the Gaza government receives from Israel could be inexact,” he said. He said WHO is updated on the health situation in both the West Bank and Gaza Strip.

“An Israeli-Chinese lab is due to be set up soon in the Gaza Strip. Based on that, there will be no need to send the samples to Israel. Also, the Gazan medical staff is well trained, as confirmed by Chakra after visiting Gaza on March 1.”