Hamas in the Gaza Strip is facing major challenges in dealing with the coronavirus pandemic due to the scarcity of financial and medical resources, despite strict containment measures. 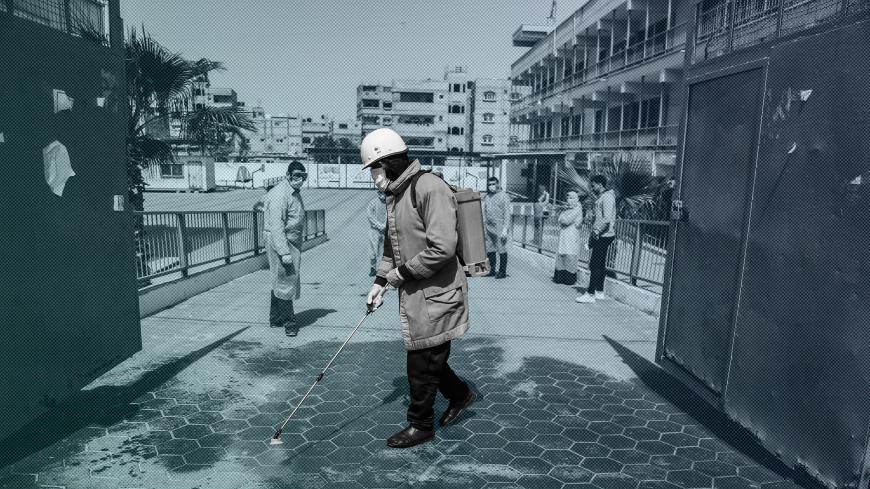 A civil worker disinfects an UNRWA-run school as a preventive measure against the spread of the coronavirus, Khan Yunis, Gaza Strip, March 23, 2020. - Yousef Masoud/SOPA Images/LightRocket via Getty Images

GAZA CITY, Gaza Strip — The Hamas movement and the ministries it runs in the Gaza Strip have intensified their efforts to confront the coronavirus pandemic by taking a series of preventive measures, as well as launching several relief projects including in-kind and cash assistance to farmers and to families affected by the lockdown in Gaza.

Hamas is coordinating production of 1 million protective masks to distribute for free to Gazans, while the Ministry of Labor has provided online registration information for workers affected by a lockdown to receive the in-kind and financial assistance.

A Hamas official told Al-Monitor on condition of anonymity that the movement intends to provide 100 ventilators from a country he did not specify, in addition to 30 of the devices it purchased and delivered to the Palestinian Ministry of Health.

The official added that the Hamas leadership formed a crisis panel in late February to confront the pandemic by taking strict measures to prevent an outbreak in the Gaza Strip, as well as harnessing all the movement's efforts to help government agencies. One significant action was building 1,000 housing units for isolation and providing emergency financial aid for 10,000 people affected by the lockdown.

He noted that Hamas political bureau chief Ismail Haniyeh, who is currently residing in Qatar, has been calling Arab leaders since mid-March to solicit financial support and medical equipment for Gaza Strip residents, as well as for Palestinian refugees in camps in Lebanon and Syria.

On April 12, Turkish presidential spokesman Ibrahim Kalin announced that his country had received an Israeli request for medical equipment, noting that Turkey had decided to send similar equipment to the Palestinian Authority. On April 15, Qatar announced it was allocating another tranche of a $150 million financial grant to Palestinians to confront the pandemic.

Al-Monitor learned from sources close to Hamas that the crisis panel issued strict instructions to Hamas and government spokesmen not to make any statements to the media without consulting the panel so as not to confuse the Palestinian public. As a result, Hamas suspended head of its government media office in Gaza Salama Maarouf on March 28 for authorizing a Palestinian media outlet to enter and film inside a quarantine center.

A major challenge Hamas faces is the lack of access to equipment necessary for examining the samples collected from those suspected of contracting the virus, as well as the lack of ventilators.

An official at the Gaza Ministry of Health told Al-Monitor on condition of anonymity that hospitals in the Gaza Strip expect to need at least 100 more ventilators and 140 beds for intensive care units, noting that the Gaza Strip currently has only 96 ventilators.

The official pointed out that Gaza has been out of antigen detection equipment since April 9, which prompted China to donate a laboratory to Gaza that would allow for 3,000 samples to be tested per day.

Israeli newspaper Maariv reported April 14 that an Israeli army laboratory on April 13 had begun examining test samples of Gazans, after Gaza ran out of test kits. In addition, Israel supplied five new test kits, which could be enough to test 500 samples, to the Gaza Strip on April 13.

Maher Abu Raya, director general of international cooperation at the Ministry of Labor in Gaza, told Al-Monitor the ministry received requests for financial aid from 130,000 Palestinian workers affected by the lockdown. He said that on April 15, his ministry started disbursing $1 million in financial aid for 10,000 workers, or $100 per worker.

Abu Raya explained that his ministry has contacted many potential donor countries, as well as UNESCO, to seek support for those whose work has been disrupted.

In the same context, the Ministry of Interior in Gaza allowed hundreds of Palestinians stranded in Egypt to return April 13 after Egypt opened the Rafah border crossing. The returnees are being quarantined for 21 days.

Mahmoud al-Hajj, 28, who is suspected of contracting the virus after coming in contact with an infected person, has been quarantined in Marmara School in Rafah. He told Al-Monitor by phone that people in quarantine are receiving proper medical care and protective equipment.

Salwa al-Najjar, 47, told Al-Monitor, “I have been quarantined in the southern Gaza Strip since I returned from Egypt and I have already tested negative [for COVID-19] twice. I just want the 21-day quarantine to end so I can return to my family in good health.”

Youness al-Sultan, a 42-year-old who has completed his quarantine, told Al-Monitor, “It is very difficult to sit in a small room for 21 days, but my safety and that of my family is more important. We received good care and services during the quarantine.”

He added, “I left quarantine April 10, and now I am back with my family and haven’t shown any symptoms so far.”

The first two cases of the virus that causes COVID-19 in the Gaza Strip were detected March 21. As of April 19, 15 people had been treated and nine had recovered. No deaths have been reported.