COVID-19 testing has resumed in the Gaza Strip with kits from the World Health Organization, but testing supplies will soon run out again in the impoverished enclave. 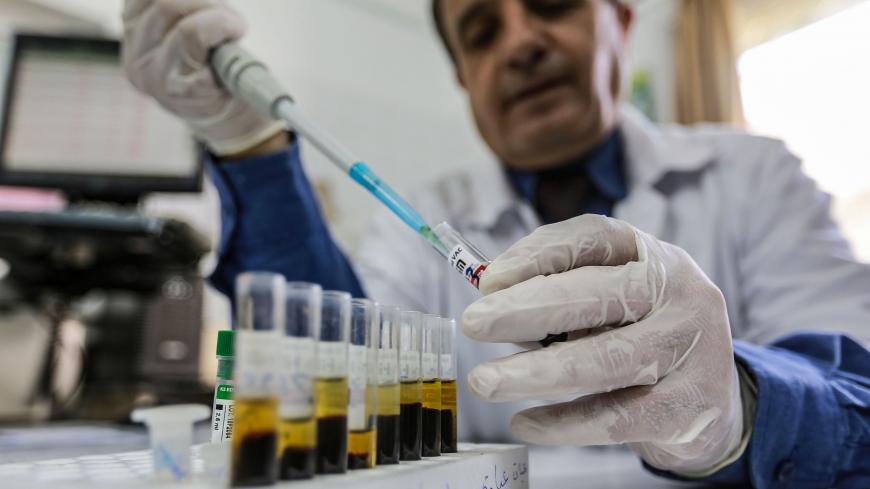 A Palestinian doctor checks a blood sample during a test for the novel coronavirus in Gaza City, Gaza, March 7, 2020. - Mohammed Talatene/Getty Images

The Gaza Strip has resumed testing for the coronavirus, a Health Ministry spokesperson said Monday after Israel allowed the delivery of five World Health Organization-purchased testing kits into the impoverished enclave.

“We need to carry out these tests all the time and therefore, we are in need of thousands of testing kits,” said spokesperson Ashraf al-Qidra.

Last week, health authorities in the Hamas-run coastal strip said because they had run out of testing kits, hundreds of people waiting on results would have to remain in quarantine. Abdullatif Alhaj, an official in Gaza’s Health Ministry, told Al-Monitor the five new kits were enough to conduct 480 tests, the results of which will take about a week.

Thirteen cases of the novel coronavirus have been diagnosed in Gaza so far. The Health Ministry has converted more than a dozen schools into quarantine centers for those returning to the Gaza Strip.

The Rafah border crossing into Egypt, the main entry and exit point for Gaza, opened Monday to allow the entry of Palestinians stranded abroad for the next four days. Hamas had closed the crossing in mid-March to prevent the spread of the coronavirus.

Experts have warned that an outbreak of COVID-19 in the tiny territory of some 2 million people, many of whom live in crowded refugee camps, would present a massive challenge for Gaza’s health care system. Military conflict with Israel, internal political instability and a 13-year Israeli-Egyptian blockade have left hospitals overburdened and understaffed.

According to Physicians for Human Rights-Israel, Gaza’s hospitals are equipped with just 70 intensive care unit beds and face a shortage of ventilators and protective equipment

In Israel, where more than 11,000 have tested positive for the virus, material shortages have led to a reduction in testing, Haaretz reports. Amid the testing rate decline, the Health Ministry said on Sunday it would begin locally producing the chemicals needed to conduct the tests.

Palestinian health officials announced the second coronavirus death in the West Bank on Friday as the number of confirmed cases rose to 266.