Israel suggests strings be attached to coronavirus aid for Gaza

Israeli Defense Minister Naftali Bennett has urged that any aid to Gaza for the COVID-19 pandemic be linked to the recovery of soldiers' remains. 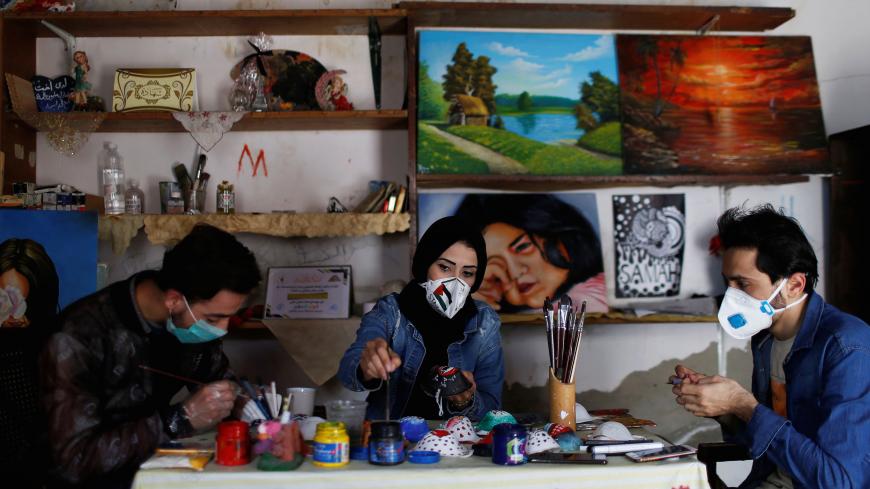 Palestinian artists paint protective face masks to encourage people to wear them as a precaution against the coronavirus disease (COVID-19), in Gaza City March 30, 2020. - REUTERS/Mohammed Salem

Israel’s defense minister suggested today that future coronavirus assistance for the Gaza Strip be contingent on recovering the remains of two Israeli soldiers who died in 2014.

Reuters quoted Bennett as telling reporters that while the world is now discussing Gaza's humanitarian issues, "Israel also has humanitarian needs, which are mainly the recovery of the fallen." He added, “It would not be right to disconnect these things.”

Israel accuses Hamas, which rules the Gaza Strip, of holding onto the remains of Oron Shaul and Hadar Goldin, both Israel Defense Forces soldiers killed in the 2014 war.

“I think that we need to enter a broad dialogue about Gaza’s and our humanitarian needs,” Bennett said.

Although Gaza's borders are largely sealed to the outside world, the coronavirus was detected in Rafah on March 21. Movement in and out of the territory is heavily restricted due to an Israeli-Egyptian blockade imposed after the militant group Hamas took over the strip in 2007.

As of today, the Hamas-run Health Ministry in the Mediterranean enclave had confirmed 12 cases of the coronavirus, including two Gazans who had recently returned from Egypt and are now in quarantine.

Public health experts say the emergence of COVID-19 in the densely populated strip could be catastrophic. Military conflict with Israel, internal political instability and a 13-year blockade have left hospitals overburdened and understaffed. Refugees living in crowded camps in Gaza are especially vulnerable, where a lack of adequate sanitation and space could create the perfect breeding ground for an infectious disease.

According to Physicians for Human Rights-Israel, Gaza’s health care system is equipped with just 70 intensive care unit beds and faces a shortage of skilled staff, oxygen devices and protective equipment.

In Israel, where the death toll from coronavirus has reached 25, Prime Minister Benjamin Netanyahu has rolled out new guidelines to slow the spread of the disease. In a televised address this evening, the Israeli leader said that all Israelis should be wearing masks out in public or an alternative face covering such as a scarf.

He also announced that families with children will receive a direct payment from the government of 500 Israeli shekels per child ($140). Travel to and from the ultra-Orthodox city of Bnei Brak, where the virus is spreading rapidly, will be limited.