The four new cases of the virus confirmed on Monday were the first detected outside Gaza's quarantine centers. 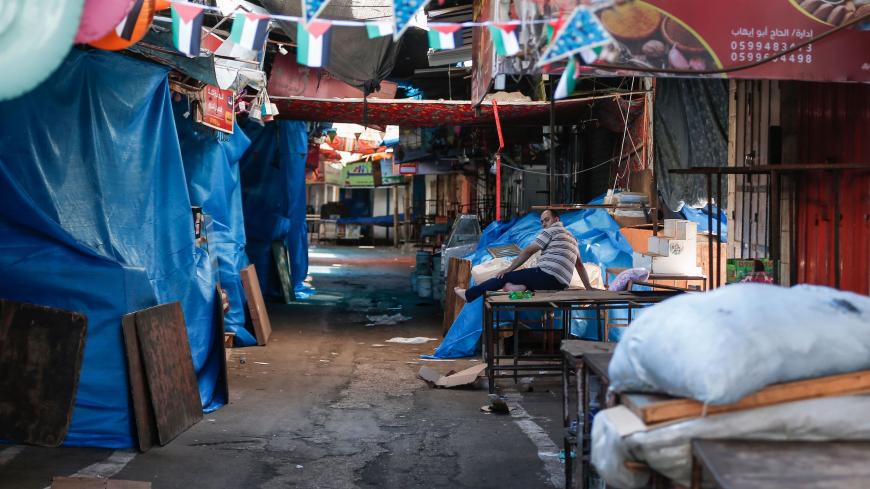 A Palestinian man sits on an empty stall at the closed-down Fras market in Gaza City, amid a two-day lockdown due to the detection of first cases of COVID-19 in the general population, on Aug. 25, 2020. - MAHMUD HAMS/AFP via Getty Images

Health officials in Gaza have imposed a full lockdown after four new cases of the novel coronavirus were detected in what appears to be the first evidence of community transmission in the impoverished enclave.

The Islamist militant group Hamas, which rules the territory of two million Palestinians, ordered the 48-hour lockdown that began Tuesday. In an effort to slow the spread of the virus, businesses, schools, grocery stores and mosques must shut their doors and most citizens are unable to leave their homes.

The four new COVID-19 cases — three men and one woman — are members of the same family who live in the al-Maghazi refugee camp in central Gaza, the Hamas-run Health Ministry said. Before Monday, health authorities in Gaza had registered just 109 cases and one death from the virus, all detected at the mandated 21-day quarantine centers set up to isolate people entering Gaza through Israel or Egypt.

“We managed to keep the virus out for this whole time, even as the virus spread across the region and the world. But we always warned that the scenario of the virus entering the Strip was possible,” a spokesperson for the ministry told the Times of Israel on Monday. “This scenario today became reality.”

Experts have warned that a wider outbreak would have devastating consequences for Gaza's already frail health infrastructure. Military conflict with Israel, internal political instability and the 13-year Israeli-Egyptian blockade have left hospitals overburdened and understaffed.

Since Hamas seized control of Gaza from the Palestinian Authority in 2007, Egypt and Israel have heavily restricted movement to prevent the group from bringing weapons across their borders. The crippling blockades, widely viewed as collective punishment by rights groups, appear to have contributed to Gaza’s extremely low rate of coronavirus infections.

The new lockdown in Gaza comes amid a flare-up in tensions between Hamas and neighboring Israel. In recent weeks, the militants have launched incendiary balloons and rockets across the border that have set fire to large stretches of farmland.

In response, Israel has carried out airstrikes on Hamas-run military facilities and underground infrastructure. The Iraeli government has also suspended fuel imports into the besieged territory, closed the main commercial crossing into Gaza and banned commercial fishing off the enclave’s coast.