Signaling to Hamas it won’t tolerate more incendiary balloons, Israel announced it will close the Kerem Shalom goods crossing for an undetermined period, allowing only the entry of fuel, food and humanitarian supplies. 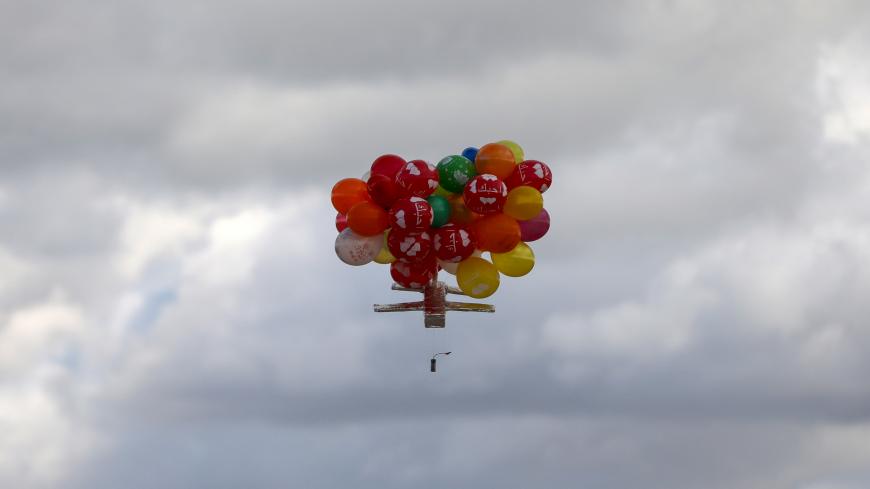 Israel closed the Kerem Shalom goods crossing with the Gaza Strip on the morning of Aug. 11. The decision was taken the previous night, after a long day of explosive-laden balloons landing in Israeli territories and igniting at least 30 bush fires. According to Israeli authorities, no injuries were reported, but 400 dunams (99 acres) of land in the Be’eri Forest were burned. Also on Aug. 10, Hamas launched a barrage of at least four rockets toward the Mediterranean Sea. A Palestinian source said that the barrage should serve as a message to Israel, to let it know that armed groups in Gaza will not "remain silent" in the face of an Israeli "aggression." Footage of the launch was posted online, with Palestinian residents seen cheering at the site.

A statement issued by the Coordinator of Government Activities in the Territories (COGAT) said that the crossing point would be closed from the morning of Aug. 11 "until further notice." It added that “the decision was made following security deliberations and in light of repeated terror attacks committed by terrorist organizations in the Gaza Strip against Israeli citizens, which is a violation of the Israeli sovereignty." Still, according to COGAT, fuel and humanitarian aid, including food, would continue to be allowed into the Gaza Strip.

Shortly after the closure of the Kerem Shalom crossing, the Israeli authorities detected two new bush fires, apparently sparked by incendiary balloons. Heads of local and regional councils in the south of Israel near the Gaza border called for a response to the launch of the balloons. "Residents are paying a heavy price. The government must put their disputes aside and address them," said the heads of the councils.

Tensions on the Israel-Gaza border have increased in the past week, with incendiary balloons launched daily from Gaza. On Aug. 2, a rocket fired at the southern city of Sderot was intercepted by the Iron Dome anti-missile defense system. Subsequently, Israeli warplanes struck several Hamas sites in the central and southern Gaza Strip. The Israel Defense Forces (IDF) said its fighter jets hit a cement factory used in the construction of underground infrastructure and “underground facilities used by the Hamas terror group.” On Aug. 9, the IDF said that Palestinians fired at Israeli troops near the border fence. The troops arrived to the area following reports of the sound of shots in the location where technicians were repairing the fence.

Last week, Israeli pundits said that Hamas is not interested in generating a new round of violence with Israel. Still, according to a Haaretz report (quoting a Palestinian source close to Hamas), the incendiary balloons campaign is not coincidental, but designed to relate a message to Israel and to the international community. Over the last few months, Israel and Hamas have negotiated indirectly a prisoner exchange deal. Israel had hinted that it would be willing to advance with such an agreement as a humanitarian gesture on the backdrop of the coronavirus crisis. Hamas now blames Israel for refusing to conclude the deal, which should also include the advancement of development and infrastructure projects in the Gaza Strip.