The Israeli authorities have closed a border crossing with Gaza as rockets rain down and dozens of incendiary balloons float from the Strip toward Israel's southern communities. 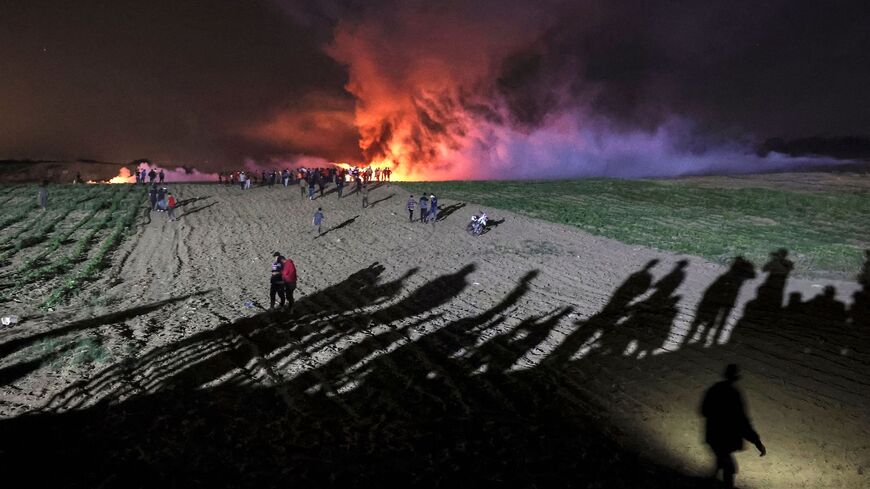 Palestinians gather amid burning tire smoke and tear gas fired by Israeli security forces during a demonstration by the Israel-Gaza border, in al-Bureij in the central Gaza Strip, on May 8, 2021. - MOHAMMED ABED/AFP via Getty Images

In a Facebook post Alian noted, "During the past week, we have all seen the violence breaking out in the Judea and Samaria [West Bank] area, the Gaza Strip, and even Jerusalem. Some of the participants believe sincerely that they are protecting the holy sites. But in fact, they are defiling them during the blessed month of Ramadan and on Qadr Night (Laylat al-Qadr). The participants are being cynically incited and exploited by those who are trying to escalate and inflame the situation, using violent and inciteful rhetoric on social and mainstream media."

The three rockets fired this morning from the Gaza Strip set off sirens in the southern town of Sderot and surrounding communities. At least one of the incoming projectiles was reportedly intercepted by the Iron Dome missile defense system. Also this morning, Palestinians in Gaza resumed launching balloon-borne explosives and incendiary devices into southern Israel.

The rocket fire and explosive balloons have been coming from Gaza for a few days now. Yesterday, Palestinians fired two rockets from Gaza toward the southern city of Ashkelon. One of the projectiles was intercepted and the other landed in an open area. No injuries were reported in either case. In a second barrage last night, two mortar shells were fired from Gaza but failed to reach Israeli territory.

Throughout yesterday, a steady stream of balloon-borne incendiary devices was launched from Gaza for a fourth day in a row, staring about 40 fires in southern Israel. Firefighting teams worked for long hours to extinguish the flames, with most of the fires doing little damage. Israel Railways temporarily shut down service yesterday between the Ashkelon and Netivot stations over one of the blazes. Israel’s public broadcaster Kan reported that 5,000 dunams of vegetation burned at the Be’eri Negev region nature reserve.

The rocket fire targeting Ashkelon came shortly after the Israel Defense Forces announced the indefinite closure of Gaza’s fishing zone. COGAT said the decision was made over "the rocket fire and continued launching of arson balloons from the Gaza Strip into Israeli territory, constituting a violation of Israeli sovereignty."

The IDF reported riots along the border with Gaza with some 500 Palestinians throwing objects at soldiers and building five tire fires. Israeli authorities kept the region's schools open despite the turbulence.