Israel is seething with conflict between Jews and Arabs with increasing tension in the West Bank, rocket fire from Gaza and with fear of escalation on the northern border. 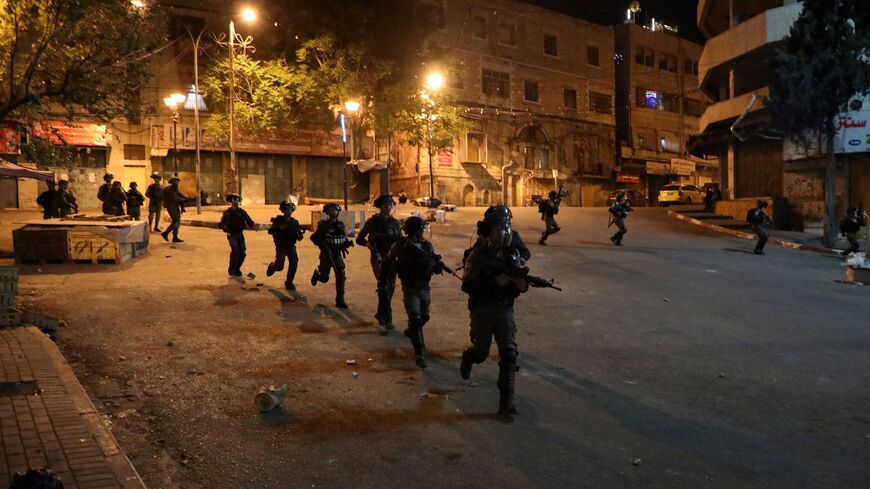 Israeli security forces run on a street during clashes with Palestinian youth in the city center of the occupied West Bank town of Hebron on April 25, 2021, following a protest in Israeli-annexed east Jerusalem. - HAZEM BADER/AFP via Getty Images

Israel completely closed off Gaza's fishing zone this morning. The Coordinator of Government Activities in the Territories (COGAT) Rassan Alian had said earlier that the Gaza fishing zone would be restricted from 15 to nine nautical miles, but after repeated rocket fire from the Strip toward the south of Israel, it was closed entirely. So far, the Israel Defense Forces have not responded militarily.

COGAT said in a statement, “Hamas is held accountable for all that is done in and from the Gaza Strip towards Israel, and it will bear the consequences for the violence committed against the citizens of the State of Israel.” Two Gaza factions, the Popular Front for the Liberation of Palestine and a branch of Fatah’s Al-Aqsa Martyrs Brigades, had claimed responsibility for the Friday-Saturday rocket fire.

Rockets have been fired from Gaza toward Israel three nights in a row. The Iron Dome anti-missile defense system intercepted two of the five projectiles overnight on Sunday. Reportedly, four people were lightly wounded after falling while running to bomb shelters early this morning. Some 40 rockets were fired into Israel over the weekend, with some projectiles launched toward the Mediterranean Sea on Saturday in an apparent show of force.

Defense Minister Benny Gantz met this morning with the United Nations’ envoy to the region Tor Wennesland to discuss the situation on Israel’s southern border. After the meeting, Gantz tweeted, "I expressed the urgency of the immediate cessation of violence from Gaza and reiterated Israel’s unyielding commitment to protecting citizens and sovereignty." Prime Minister Benjamin Netanyahu met on Saturday with Gantz and IDF Chief of Staff Aviv Kochavi, ordering them to prepare for any scenario. Israel’s security cabinet is set to meet this afternoon to discuss the escalation. On the backdrop of the Gaza fire, Kochavi canceled his scheduled trip to the United States yesterday.

The situation in Jerusalem is also increasingly volatile. Jews, Muslims and police officers have clashed on several occasions during the past few days, mostly near Jerusalem Old City's by the Damascus Gate. On Saturday, Netanyahu called on all parties to halt the violence, tweeting, "We are maintaining freedom of worship as we do every year, for all residents and for all visitors to Jerusalem. At the moment we demand compliance with the law and I call for calm on all sides."

Netanyahu’s call came after an especially turbulent evening, with dozens of people detained by police. In a gesture of appeasement toward Muslims, the police removed the temporary fences placed by the Damascus Gate. Palestinians reportedly threw stones outside the Dung Gate today, lightly wounding a passer-by.

Last week, the far-right Lehava group organized a march in Jerusalem, angering the city’s Arab residents. Some of the marchers called for "death to the Arabs." The United Arab Emirates condemned the march by the extremist Jewish group and called on Israel to reduce tensions in the city. In its statement yesterday, the Emirates called “upon the Israeli authorities to assume responsibility toward de-escalation and putting an end to all aggressions and practices that perpetuate tension and hostility.”

Adding to these tensions are also Israeli fears of an outbreak of violence on its northern borders with Lebanon and Syria. Touring the region on April 20, Gantz warned Iran-affiliated Hezbollah, “The IDF is in a state of readiness across the entire northern border and is certainly optimally prepared on the Lebanese front.”

Kochavi had canceled his trip to Washington set up for this week, but other senior security officials are scheduled to travel there today. The high-level delegation headed by Mossad chief Yossi Cohen and national security adviser Meir Ben-Shabbat is expected to voice Israeli concerns over US talks with Iran.