Israel carries out multiple airstrikes after 12 rockets from Gaza

Escalation on Israel-Gaza border: Israel Defense Forces jets struck Hamas targets in the Gaza Strip three times, after 12 rockets and projectiles were launched during the night from Gaza. 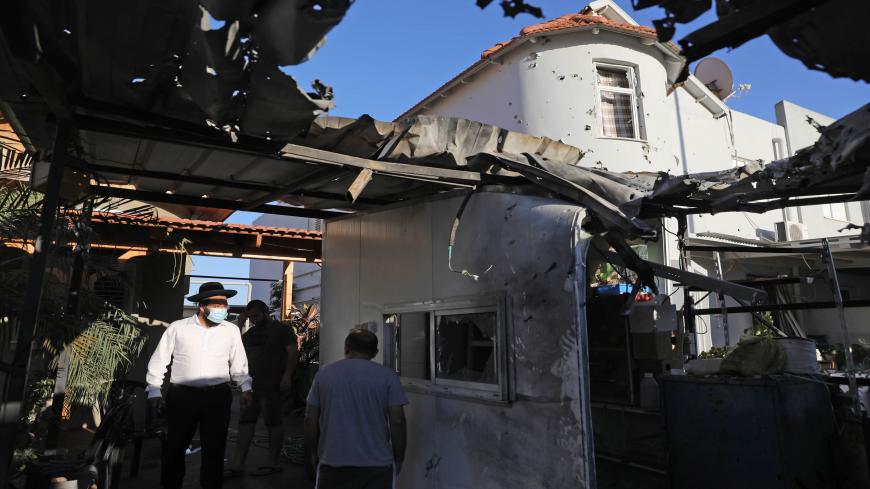 People inspect the damage to a house that was hit by a rocket launched from the Gaza Strip to the southern city of Sderot, Israel, Aug. 16, 2020. - MENAHEM KAHANA/AFP via Getty Images

Israeli warplanes carried out three consecutive rounds of airstrikes against Gaza Strip targets. Two strikes were carried out last night (Aug. 20), and one early this morning. According to reports by the army, Israel Defense Forces (IDF) fighter jets first hit a cement facility providing materials for tunnels used by Gaza terror groups and a site where rockets are manufactured. The third air raid targeted a Hamas underground infrastructure.

The IDF attacks followed a barrage of rockets fired from the Gaza Strip. In all, 12 rockets and projectiles were launched from Gaza, with six of the seven rockets intercepted by the Iron Dome missile defense system. Still, one rocket hit a house in the southern town of Sderot, causing considerable damage. No injuries were registered from the rockets. Pictures and videos shared on social media of the home that was struck showed a kitchen blown apart and large holes in walls and the roof.

Thousands of Israelis residing in the south of the country spent the night in bomb shelters, as warning sirens kept sounding. One woman fell and was injured on her way to the shelter during the red alert siren, and three people were treated for anxiety.

Last night’s volley of rockets and projectiles marks a major escalation of violence on the Israel-Gaza border. Over the past few weeks, Palestinian militants in Gaza renewed the launching of incendiary and explosive-laden balloons, igniting more than 200 fires in the south of Israel. They also fired rockets sporadically. On Aug. 20, 42 bush fires were sparked by balloons. The IDF issued last night a statement saying, "We hold Hamas responsible for all terror activity emanating from Gaza."

Two fires broke out this morning (Aug. 21) at the Karmiya natural reserve. Authorities said that both fires were sparked by incendiary balloons. The authorities are also checking the origins of a fire sparked in the Hof Ashkelon region. The IDF instructed farmers not to go to their fields adjacent to the Gaza border this morning.

According to Palestinian reports, Egypt-mediated talks to restore calm in the region continue, though the Egyptian intelligence delegation that arrived to Gaza earlier this week left yesterday. Reports claim that the delegation left, since Israel rejected conditions imposed by Hamas. Arab outlets have reported that Hamas demands that Israel enlarges the Gaza fishing zone to 20 nautical miles, increases the number of work permits for Israel and enables the operation of the Gaza power plant. Israel Today news site reported that Hamas also demands to increase Qatari financial aid from $30 million to $40 million a month. On Aug. 13, following dozens of fires ignited by incendiary balloons from Gaza, Defense Minister Benny Gantz suspended fuel imports to Gaza and reduced Gaza's fishing zone from 15 nautical miles to 8 miles.