After understandings with Hamas, Israel pushes for comprehensive cease-fire

Israel warns Hamas that in order for the temporary cease-fire to be implemented, balloon terror from the Gaza Strip must stop. 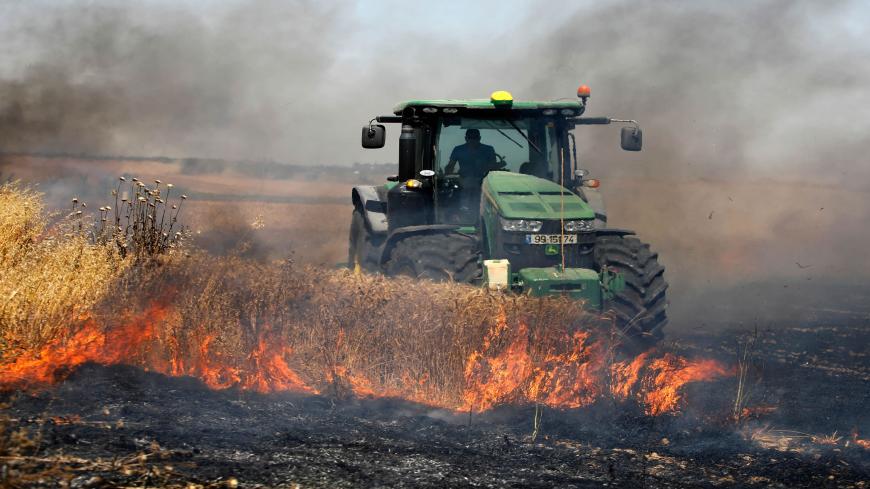 An Israeli farmer uses a tractor in an attempt to extinguish a fire in a wheat field near Kibbutz Nahal Oz, along the border with the Gaza Strip, after it was caused by inflammable material attached to a helium balloon flown by Palestinian protesters from across the border, May 15, 2019. - MENAHEM KAHANA/AFP via Getty Images

Israel and Hamas reached Aug. 31 understandings for de-escalating tensions. Qatari envoy to the region Mohammed al-Emadi mediated the talks, under the auspices of Egypt and the United Nations. The news about the agreement came first from Hamas Gaza leader Yahya Sinwar. Israel did not explicitly confirm the agreement, but tacitly acknowledged it by promising to reopen the Gaza crossing point for commercial goods and the fishing zone if calm was maintained.

Israel’s Coordinator of Government Activities in the Territories (COGAT) said that following consultations with Defense Minister Benny Gantz, it was decided to reopen Sept. 1 the commercial Kerem Shalom crossing point into the Gaza Strip. Thus, goods and also fuel will be allowed to be transferred into Gaza. The COGAT office also announced that the Gaza fishing zone, which was limited to 8 nautical miles, would be increased again to 15 miles.

The COGAT office warned that the measures agreed upon depend on quiet being kept in the region. If Hamas will not keep to its commitments the easing measures would be revoked, according to the announcements. Later in the day, Israeli press reported that despite the understandings, sounds of explosive-laden balloons were detected near the southern city of Sderot.

While Hamas hurried to depict the temporary cease-fire as an achievement of the movement, the Israel Defense Forces (IDF) credited the latest understandings to the airstrikes carried out in the last three weeks by Israeli tanks, fighter jets, attack helicopters and other aircraft against some 100 targets belonging to Hamas. “Over the last weeks, Hamas launched rockets, explosive and arson balloons from the Gaza Strip at Israeli civilians. In addition, a number of violent riots were instigated along the Gaza Strip security fence. In response, the IDF struck approximately 100 military targets belonging to Hamas during 19 nights.”

Apparently, those 100 Hamas targets struck across the Gaza Strip included some 35 weapons manufacturing and armament targets, 30 underground workshops and tunnel openings, several military compounds, drones and anti-aircraft missile equipment, a number of sites used by the Hamas naval commando unit and over 20 observation posts. “These strikes represent significant damage to the military infrastructure and armaments of the Hamas terror group,” the IDF said in a statement.

The news about the agreement was welcomed in Israel with mixed feelings. Shlomo Malka, whose home in Sderot was hit by a rocket Aug. 21, expressed skepticism over Hamas' commitments. "I don’t believe what is said there. For the moment, I am just celebrating my own private miracle [of surviving the rocket attack]. I think that the situation will quickly slide back to what it was before. It’s a matter of hours or days."

Hundreds of incendiary balloons were launched from Gaza toward Israel in the past three weeks, provoking more than 200 fires. Some fires burned natural reserve spaces, others broke out in farmed fields. Several rockets and projectiles were also launched from Gaza.

The IDF kept repeating it considers Hamas responsible for all attacks emanating from the Gaza Strip — whether these were provoked by Hamas militants or members of other terror groups. Still, the Israeli army made a point of targeting Hamas military targets, to avoid civilians being hurt. It now seems that it was this strategy that enabled the sides to reach the temporary agreement.

According to reports in Israel, Qatar has promised Hamas to increase its monthly payments for several months. Israel also believes that the sanctions it has imposed on Gaza lately — especially the restrictions on importing fuel through the Kerem Shalom crossing and the ensuing cuts in power — pushed Hamas into accepting the compromise proposal.

Haaretz newspaper reported that Israel had agreed to the installment of a natural gas pipeline in the Gaza Strip, to advance projects that would offer Gaza residents employment and to allow additional coronavirus detection equipment to be transferred. Associates of Emadi said in a statement that he will meet with officials from the Israeli Delek gas company to discuss plans for constructing a natural gas pipeline in Gaza.

Hamas senior Khalil al-Hayya said Sept. 1 that if Israel does not fulfill the terms of the cease-fire agreement with the movement within two months, there could be another round of violence on the Gaza-Israel border.

The understandings reached Aug. 31 might open the way for a larger agreement. The sides have been negotiating for several months for a comprehensive cease-fire. Israel had hoped that such a deal would be reached during the first months of the coronavirus pandemic, but that was not the case. With the coronavirus resurging in the Gaza Strip, Israeli experts estimate that Hamas could tone down its demands and opt for a deal. Reportedly, Gantz now pushes for the renewal of contacts in that direction. For Israel, a major component in such a deal would be the release of Israeli civilians and the bodies of two Israeli soldiers held by Hamas.