In a meeting yesterday between senior Israeli and Egyptian defense officials, Israel asked Egypt to pressure Hamas to stop the ongoing nightly demonstrations by the Gaza border. 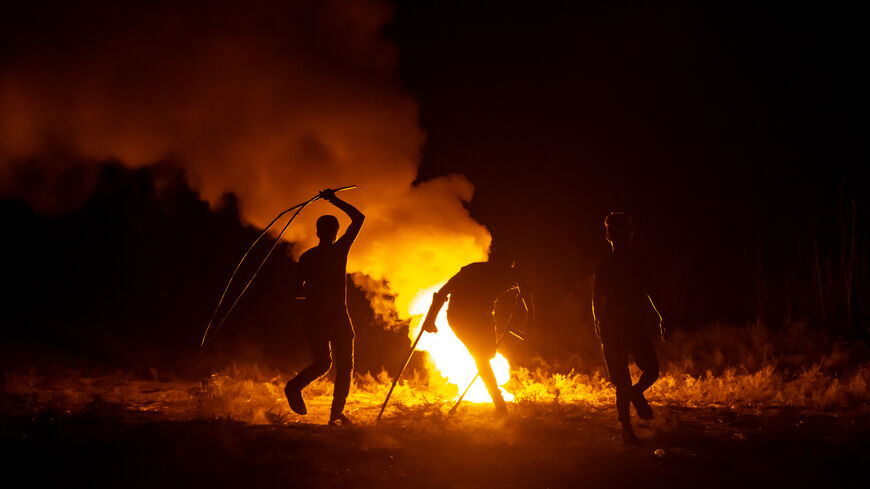 Palestinian protesters take part in a nighttime demonstration near the fence along the border with Israel, east of Gaza City on Sept. 2, 2021 in the Gaza Strip. - Fatima Shbair/Getty Images

Israel’s Coordinator Of Government Activities in the Territories (COGAT) Rassan Alian and the head of the Africa/Middle East desk at the National Security Council, whose name is forbidden from publication, visited Egypt Sept. 2 and met with senior intelligence officials there.

Israeli press reports said that the two Israeli officials asked their Egyptian interlocutors to pressure Hamas to stop the ongoing nightly demonstrations at the Gaza border. For the past few days, Gazans have been gathering near the security fence, burning tires and hurling explosives at Israeli troops stationed along the border. The escalation was apparently prompted by frustration in Hamas over the deadlock in the Egypt-mediated talks with Israel for a long-term arrangement. Gaza health authorities reported that one Palestinian man died and four were injured by live fire in violent clashes last night. Hamas sources said the Israel Defense Forces used sniper fire at specific targets and a drone that dropped tear-gas grenades on the rioters as means to disperse the demonstrations.

Frustration in Israel is growing over these demonstrations, called "night disturbances" in Gaza. IDF soldier Barel Hadaria Shmueli was shot on Aug. 21 by a Palestinian and later died of his wounds. Shmueli's family members and public figures have been criticizing the Israeli defense leadership, claiming the soldiers near the border did not receive the orders needed to allow their own protection. A public campaign over this issue has gone viral. An IDF probe published today blamed the killing of Shmueli on poor deployment of troops and not overly restrictive firing regulations. The parents of Shmueli rejected these conclusions and continue to hold the IDF leadership responsible for the death of their son.

Despite the Gaza unrest, Israel approved a series of civil measures on Sept. 1 designed to ease conditions in the Strip. They included expanding Gaza's fishing zone to 15 nautical miles and granting entry permits into Israel to 5,000 Palestinian merchants in addition to the 2,000 already permitted entry. Israel is now reportedly waiting to see if the fence riots calm before deciding whether to continue the Egypt-mediated talks with Hamas.

The Sept. 2 meeting also dealt with two other topics. The Israeli officials asked their counterparts to tighten cooperation between Israel and Egypt on thwarting smuggling into the Gaza Strip. Specifically, Israel is worried over the smuggling of construction materials and parts that could be used for both civil and military purposes. Israel assesses that Hamas is trying to rehabilitate its attack capabilities, which were severely damaged in the last round of fighting in May.

Another point discussed in the meeting was the upcoming visit of Prime Minister Naftali Bennett to Egypt. On Aug. 18-19, Egyptian General Intelligence Directorate chief Abbas Kamel visited Israel and met with Bennett, Defense Minister Benny Gantz and Foreign Minister Yair Lapid. The main issue discussed was the possibility of a long-term agreement with Hamas and the reconstruction of Gaza. In his meeting with Israel’s prime minister, Kamel handed him a personal invitation from Egyptian President Abdel Fattah al-Sisi to visit Egypt within the next few weeks. A Sept. 1 report in the Israeli press claimed Bennett will soon travel to the Sinai Peninsula to meet with Sisi in Sharm al-Sheikh. The Sharm al-Sheikh meeting will apparently take place without the presence of journalists.