Israel says the measures are dependent on "preservation of security" and follow the announcement of $155 million to the Palestinian Authority. 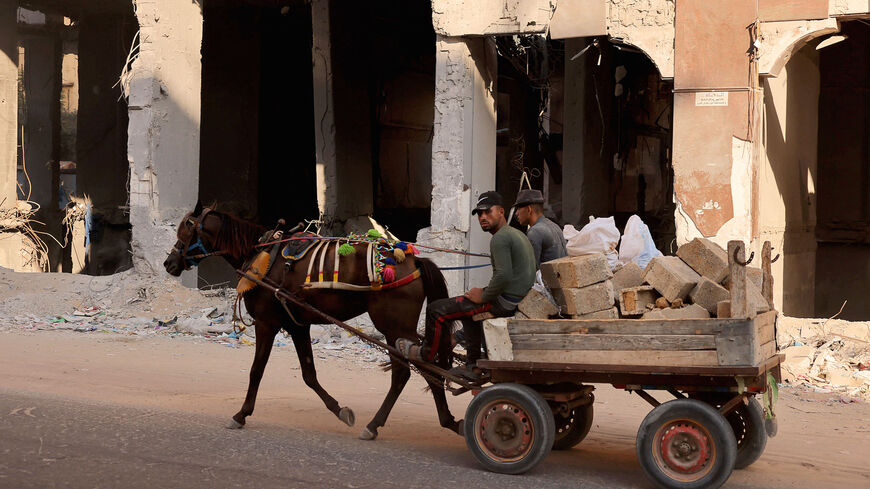 Palestinians ride a horse cart carrying rubble past the ruins of buildings destroyed in the latest round of Israeli-Hamas fighting, in Gaza City, on Aug. 25, 2021. - MOHAMMED ABED/AFP via Getty Images

Israel’s Coordinator on Government Activities in the Territories (COGAT) announced this morning a series of goodwill measures to be implemented immediately toward the Gaza Strip. The first, most significant step, is expanding Gaza's fishing zone to 15 nautical miles. This is the furthest point the fishing zone of Gaza has reached since 2007. Israel will also enable the entry into the country of 5,000 Palestinian merchants on top of the 2,000 already permitted entry. Still, only Gazans who either had the coronavirus or workers who have been twice vaccinated will be eligible for these new entry permits. An additional 1.3 billion gallons of water will be allowed into Gaza, whose aquifers have seriously deteriorated in recent years.

“These civil steps were approved by the political echelon and are dependent upon the continued preservation of security stability for an extended period. An extension of them will be considered in accordance with a situational assessment,” read COGAT’s statement today.

Shortly after the announcements of the measures, the Israel Defense Forces (IDF) said it had thwarted an attempt to smuggle into Gaza breathing-protection equipment apparently designed for digging terror tunnels in the Strip.

Yesterday, Israel allowed the import of crucial construction material needed for the Strip's reconstruction following the recent conflict with Hamas in May, and also the import of other goods. These will all be allowed into the Strip through the Kerem Shalom crossing point.

The measures were announced despite the escalation of tensions on the Gaza-Israel border over the past week. On Aug. 21, IDF soldier Barel Hadaria Shmueli was shot through a hole in a wall by a Palestinian rioter. Shmueli later died of his wounds. His family and several public figures are demanding the army investigate the incident, claiming the soldiers near the fence did not receive correct orders in order to protect their lives.

Hundreds of Palestinians demonstrated last night violently near the border fence for a fourth straight night of riots. IDF Chief of Staff Aviv Kohavi warned Aug. 30 Israel would not tolerate the riots. “Calm and security will allow an improvement in civil conditions, but rioting and terror will lead to a strong response or operation. We have improved our attack capability in the Gaza Strip and our operational plans, and if quiet isn’t preserved in the south, we won’t hesitate to embark on another campaign. The reality of [Gazans’] lives can be completely different and significantly improved, but that will not be the case as long as terrorist acts of any kind continue,” he said.

Hamas reacted today to the steps by saying these were not enough and warning of more escalation unless Israel takes real steps to radically change for the better lives of Gazans.

On Aug. 29, Defense Minister Benny Gantz met in Ramallah with Palestinian President Mahmoud Abbas. After the meeting, Gantz announced a series of trust-building measures vis-a-vis the Palestinians, including a $155 million loan to the Palestinian Authority (PA) and the registration of thousands of West Bank Palestinian businesses for digital payments — a move that would ensure the PA receives an added 10 million shekels in taxes from those businesses.