Along with several other humanitarian gestures, Israel announced it would expand the offshore fishing zone by 15 nautical miles. 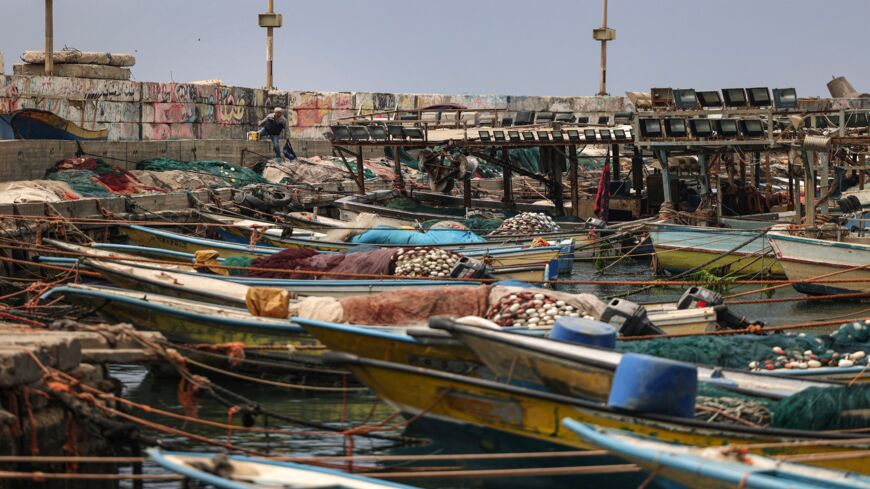 This picture taken on April 26, 2021, shows a view of fishing boats moored at the fishing port of Gaza City. Israel announced on April 26 that it closed the fishing zone in the already-blockaded Gaza Strip preventing fishermen from going out to sea after repeated rocket attacks on the Jewish side. - MAHMUD HAMS/AFP via Getty Images

Israel on Wednesday said it would expand the fishing zone off the Gaza Strip coast following a wave of Palestinian protests against Israel's restrictions on the impoverished enclave.

The Office of the Coordinator of Government Activities in the Territories (COGAT), the Israeli defense body that handles civilian affairs in the Palestinian Territories, announced the expansion along with a series of other goodwill gestures on Wednesday.

"It has been decided to expand the fishing zone in the Gaza Strip to 15 nautical miles, as well as to completely open the Kerem Shalom crossing for the passage of equipment and goods," said COGAT.

Fishing is a major source of revenue for the impoverished Palestinian enclave. Israel, which maintains a blockade on Hamas-run Gaza, has over the years placed limits on how far Gazan fishermen can go to fish, as a way of pressuring the militant group.

The 1993 Oslo Accord required Israel to allow an offshore fishing range of 20 nautical miles. Israel has reduced the size of the zone since Hamas took over Gaza in 2007 in what rights groups say is a form of collective punishment that harms the civilian population.

At 15 nautical miles, the expansion announced Wednesday is the furthest distance allowed by Israel since Hamas seized control of Gaza in 2007.

During the 11-day war with Hamas in May, Israel closed the fishing zone and the Kerem Shalom commercial border crossing. On Wednesday, COGAT announced it would fully reopen the crossing and permit additional Gazan merchants to enter Israel. The military body also said Israel will supply Gaza with an additional 1.3 billion gallons of water.

COGAT said the new measures “are conditional upon the continued preservation of the region’s security stability for the long term.”

The announcement comes after four days of violent riots on the Gazan border. On Monday, an Israeli soldier died from a gunshot wound sustained during a protest last month, which also left two Palestinians dead and dozens wounded.

The Israeli steps are aimed at reducing tensions with Hamas, which in recent weeks has sent incendiary balloons across the border that have set fires to Israeli farmland.

Ahead of Prime Minister Naftali Bennett meeting with President Joe Biden last week, Israel unveiled a number of humanitarian gestures, including an easing of restrictions at the Kerem Shalom crossing.

Earlier this month, Israel reached an agreement with Qatar and the United Nations to allow the regular transfer of cash payments to families in the impoverished Gaza Strip.