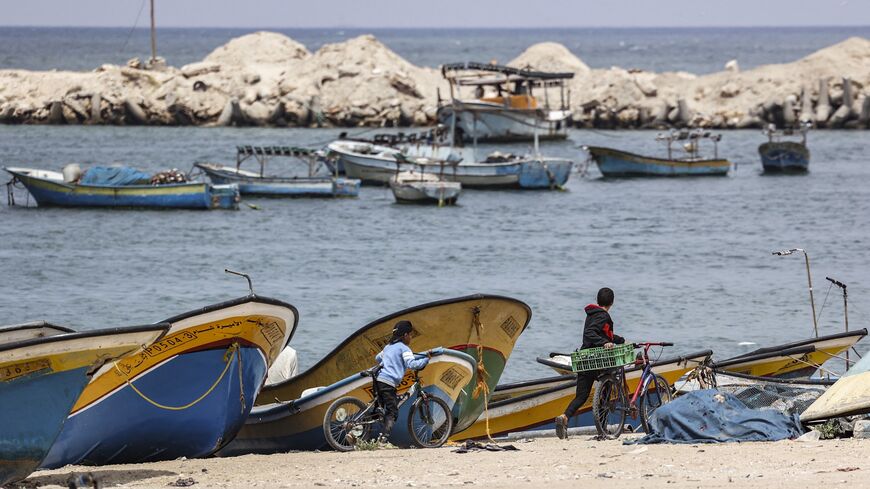 Palestinian boys walk with bicycles past shored fishing boats at the seaport of Gaza City on April 26, 2021. Israel announced April 26 that it had closed the fishing zone in the already-blockaded Gaza Strip, preventing fishermen from going out to sea after repeated rocket attacks on the Jewish state. - MAHMUD HAMS/AFP via Getty Images

Israel reopened a fishing zone off the coast of the Gaza Strip, days after closing it in response to repeated rocket fire blamed on Hamas.

A statement Thursday from the Coordinator of Government Activities in the Territories (COGAT), which is Israel's military liaison to the Palestinians, said the zone would be reopened to its normal 15 nautical miles.

“Following security consultation, it was decided today to reopen the fishing zone,” COGAT said. “The return of this civilian policy toward the Gaza Strip is conditional upon continued calm and security stability.”

Fishing is a major source of revenue for the impoverished Palestinian enclave. Israel, which maintains a blockade on Hamas-run Gaza, has over the years placed limits on how far Gazan fishermen can go to fish, as a way of pressuring the militant group.

The 1993 Oslo accords required Israel to allow an offshore fishing range of 20 nautical miles. Israel has reduced the size of the zone since Hamas took over Gaza in 2007 in what rights groups say is a form of collective punishment that harms the civilian population.

A barrage of rockets fired from the coastal enclave toward southern Israel over the weekend caused minor damage and injured several civilians. In response, the Israeli military conducted air raids against Hamas targets in Gaza and on Monday, Israel announced it would be shutting access to the fishing zone until further notice.

Two Palestinian militant groups in Gaza, Fatah’s Al Aqsa Martyrs’ Brigades and the Popular Front for the Liberation of Palestine’s Abu Ali Brigades, claimed responsibility for the rockets. The attacks came amid violent clashes between far-right Israeli nationalists and Arab residents in Jerusalem that were partly triggered by Israel’s barring Palestinians from gathering outside the city’s Damascus Gate.