Netanyahu goes after Bennett, with IDF paying the price

In his zeal to attack Prime Minister Naftali Bennett, opposition head Benjamin Netanyahu and associates are even ready to tarnish the IDF and its commanders. 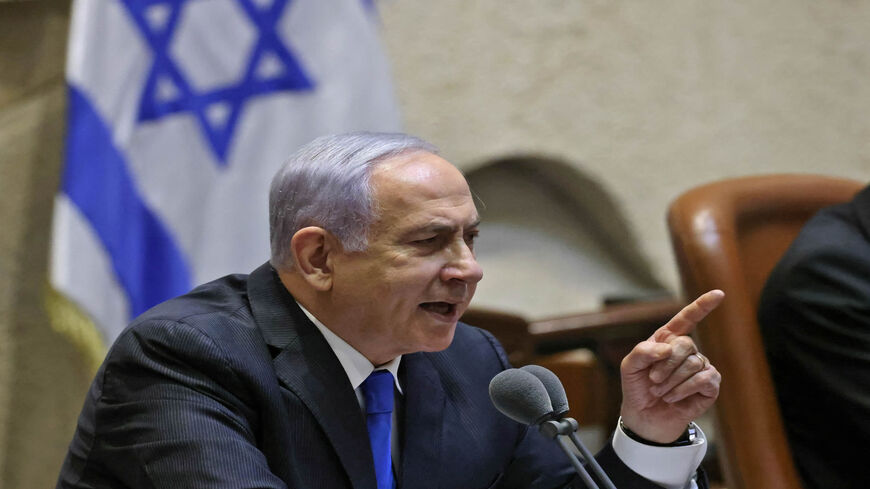 Border Police sharpshooter Sgt. First Class Barel Hadaria Shmueli was shot Aug. 21 at point-blank range during Palestinian rioting on the border fence with the Gaza Strip. On Aug. 30, he succumbed to his wounds and died. The incident had generated public controversy over the deployment of soldiers near the Gaza fence and over fire-opening instructions. More so, it has been shaking up the Israel Defense Forces (IDF) and Israel’s political echelons. One could say that the final bastion has crumbled. In the wake of Shmueli’s killing, the political right and especially followers of former Prime Minister Benjamin Netanyahu have targeted the last remaining sacred cow of the Israeli ethos: the IDF.

This attack in social media reflects ongoing attempts by Netanyahu and his supporters to call into question the legitimacy of all official Israeli institutions. Their goal is clear: to erode the already fragile legitimacy of Prime Minister Naftali Bennett and his government. Many observers believed this wild, relentless onslaught by Netanyahu’s associates would come to a halt before crashing into the military, which many Israelis still view as a symbol of national consensus. They were wrong. Even when he was vacationing in Hawaii, Netanyahu had no qualms about exploiting the tragic killing for his own political needs.

The shooting occurred as Palestinians were preparing for a large protest march along the border in northern Gaza. Israeli troops were deployed in large numbers, but due to faulty intelligence the force commanders failed to foresee that the Palestinian masses would storm the fence. During the melee that followed, a member of Hamas pulled out a gun he had hidden in his pants. He stuck it through a small opening in the fortified wall used by Israeli sharpshooters to push back rioters, firing off a number of bullets that hit Shmueli in the head.

The sight of a Palestinian shooting an Israeli soldier point-blank, caught live on cameras, set off a public storm, which quickly shifted from the military battle field to the political one. The first to signal this shift was none other than opposition leader Netanyahu, who was vacationing on the Hawaiian island of Lanai owned by billionaire Oracle Corp. founder Larry Ellison. The two were seen dining at an island restaurant.

When Bennett called the Shmueli family shortly after the shooting to inquire about their wounded son and offer his support, he misspoke and called the soldier by his father’s name (Yossi). Netanyahu lost no time in pouncing on this gaffe, posting it on social media under the caption “Shame!” This was the signal for his fans to take to social media and propound the theory, largely comprised of fake news, that the political echelons had instructed the IDF to avoid opening fire at Gaza rioters so that Bennett could have his day at the White House and his much-anticipated Aug. 27 photo-op with President Joe Biden.

Netanyahu’s followers and the deep right had all the kindling they needed to set fire. Calls and slogans such as “Bennett is a traitor” competed with posters showing Bennett waving his arms covered in blood. However, this time, unusually so, the shaming campaign did not stop with the politicians. It moved swiftly to the ranks of the military, focusing on the head of the southern command and Netanyahu’s former military aide, Maj. Gen. Eliezer Toledano, as well as officers and commanders of the Gaza Division. A protest movement of reserve combat soldiers popped up online, with some claiming the army was tying the hands of its fighters, curtailing their freedom to fire at the enemy and by doing so abandoning them to their fate on the politicians’ orders.

The IDF has since released a preliminary investigation report over the incident. The facts are very different from the shocking description on social media of the events that day along the border. The IDF was not given any order to rein in its troops, the open fire rules remained unchanged as demonstrated by the 43 bullets fired by army sharpshooters toward the rioters storming the fence. The investigation of the incident found that the number of bullets was actually higher than the number usually fired under such circumstances, and Shmueli himself had managed to get off five shots at the rioters before being felled. The investigation concluded that the force commanders made a tactical error by failing to sever contact with the rioting Palestinian masses by pulling back into protected firing positions used by the IDF to stop anyone trying to infiltrate through the fence.

“The officers of the Gaza Division are frustrated,” a senior military officer told Al-Monitor, speaking on condition of anonymity. “This is an orchestrated effort to turn fighters against their commanders, to erode morale and undermine our legitimacy.” When Al-Monitor asked him who was behind this attempt, he chose not to answer. “You can see what’s going on just like I can,” he said.

Surprisingly, even the IDF’s speedy investigation of the shooting death, made public Sept. 3, failed to calm the waters. Netanyahu's supporters are behaving as if this was the first Israeli combat soldier killed in Gaza and as if the Israeli containment strategy vis-a-vis Gaza and Hamas was the brainchild of the Bennett government. Persistent attempts in recent days by the top military brass as well as by Bennett himself to restore calm have failed, for now.

The question is where Netanyahu draws the line. Judging by his statements, it seems that Netanyahu is growing increasing desperate in light of the growing prospects that the Bennett government will successfully push final budget approval through the Knesset in November. This would greatly reduce the opposition’s odds of bringing the government down and returning to power.

With this, Netanyahu will soon face a momentous decision. Should he keep wasting his time serving as opposition leader at the head of the frustrated Likud party, where his would-be successors are chomping at the bit, or accept one of the very good business offers he has reportedly received in recent months. Conventional wisdom has it that the longer his trial on charges of bribery and corruption drags on, the more he will strive to hold on to his position, a statutory perch from which he can negotiate a plea bargain from a position of power.