Incendiary balloons may spell end of quiet on Israel-Hamas border

The rocket fired from Gaza at the beginning of the week and the incendiary balloons yesterday, might signal that the six months of quiet on the Israel-Hamas border are now over. 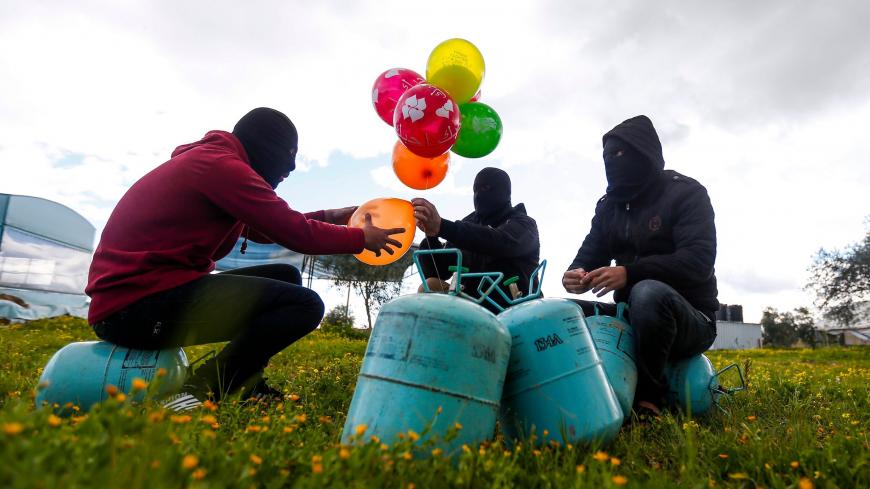 Masked Palestinians prepare to attach balloons to a gas canister before releasing them with an incendiary device near Gaza's Bureij refugee camp, along the Israel-Gaza border fence, on Feb. 10, 2020. - MAHMUD HAMS/AFP via Getty Images

Israeli fighter jets struck underground Hamas infrastructure in the Gaza Strip on the night of Aug. 5. The Israel Defense Forces did not offer any other details on the nature of the target.

The strike came hours after several explosive-laden balloons were launched from the Strip. A spokesperson for the Fire and Rescue Service said that the balloons started at least three fires. They were apparently small and posed no real danger, though one of them spread rather quickly. The fires were brought under control and no injuries were reported. Publications later in the day referred to five bush fires sparked by the incendiary balloons. Another balloon that carried a suspected explosive device was found near the southern city of Arad by police and detonated in a controlled explosion.

Defense Minister Benny Gantz warned Hamas over continuing the balloon attacks, tweeting, “The State of Israel won’t accept any violation of its sovereignty or harm to residents of the south. Gaza must realize that there is no other solution — only returning the boys [the bodies of IDF soldiers Hadar Goldin and Oron Shaul] and quiet will offer the Strip economic growth. If the terror organizations still don’t understand, whoever tests Israel will be hit hard.”

For a rather long period until this week, the border had been quiet. Yesterday’s incendiary balloons were the first to be launched from Gaza in nearly six months. Israel now fears that the quiet might be over. On Aug. 3, a rocket was launched from the Strip toward Israel. It was intercepted by the Iron Dome anti-missile system and caused no harm. The IDF retaliated by attacking several Hamas targets in central and southern Gaza, reportedly hitting a cement factory allegedly used in the construction of underground infrastructure.

The balloons suggest that the rocket might not have been an isolated episode. Tensions have been growing on Israel's northern borders with Lebanon and Syria and Israel has deployed extra forces in the Galilee region. The army now faces the possibility of a conflagration near Gaza as well. Adding to tensions on both fronts, Israeli troops clashed today, Aug. 7, with Palestinians in the West Bank. According to the IDF, a riot erupted while troops where operating in the city of Jenin, with Palestinians opening fire and hurling explosives. A 23-year-old Palestinian woman was reportedly killed during the riots under circumstances that are still unclear.