The Israeli leadership must realize that the humanitarian crisis in Gaza increases every day, and react appropriately despite the upcoming elections that might delay a solution by almost half a year. 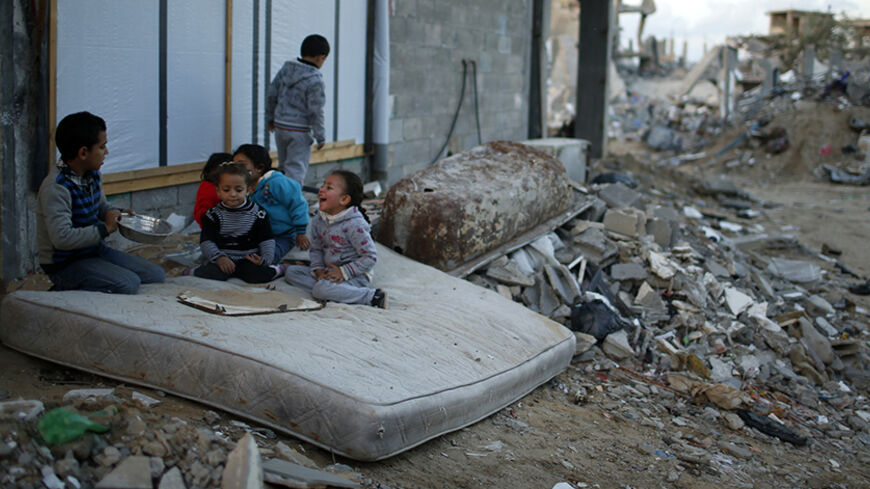 Palestinian children play on a mattress near the ruins of houses destroyed by Israeli shelling during the most recent conflict between Israel and Hamas, in the east of Gaza City, Dec. 1, 2014. - REUTERS/Mohammed Salem

A serious humanitarian crisis is developing fast in the Gaza Strip. While no one is dying of hunger or infectious diseases, most Gaza residents are suffering from hardship and unemployment. The situation is worsening day by day and what can only be defined as a disaster is fast approaching.

Rasha Abou Jalal reported for Al-Monitor that according to the Palestinian Central Bureau of Statistics the rate of unemployment in Gaza in the second quarter of 2014 reached more than 44%. Representatives of human rights organizations in the Gaza Strip claim that figures for the past few months — which have yet to be released — paint an even bleaker picture of an unemployment rate of over 50%, i.e., every other adult in Gaza is unemployed.

Another worrying piece of information is that employees and business owners in Gaza are also having a hard time staying afloat. Even those with positions in the Hamas administration find themselves forced to visit the food warehouses of the United Nations Relief and Works Agency for Palestine Refugees in the Near East (UNRWA), to meet the nutritional needs of their families. In fact, today more than ever before, UNRWA provides for the basic needs of most Gaza residents. Many Gazans survive on the flour and other staples that UNRWA provides to the unemployed and employed alike.

Even before the start of Operation Protective Edge on July 8, the economic situation in Gaza was very serious. Still, the enormous devastation of the war and the creeping pace of renovation and reconstruction in its aftermath bode disaster for the Gaza Strip’s 1.8 million residents, just as they do for Israel.

Israel tends to blame Hamas for the crisis, while indirectly it also blames Egypt’s closure of its border crossing with Gaza. At the same time, Israel attempts to shine a spotlight on the trucks carrying food and raw materials into Gaza through the Kerem Shalom crossing. This way, Israel can claim that there is no state of starvation in Gaza — a claim that is true in itself.

No one disputes that the situation faced by the people of Gaza has dramatically deteriorated since Hamas seized power there in June 2007. At the same time, however, Israel, to a great extent, also shares the responsibility for the growing crisis. More than seven years of closure and the consequences of major military operations by the Israel Defense Forces (IDF) — Operation Cast Lead in 2008, Operation Pillar of Defense in 2012 and Operation Protective Edge in 2014 — have transformed the Gaza Strip into a disaster area.

The purpose of this discussion, however, is not to determine who is more responsible for the miserable state of affairs in Gaza. It is to raise a red flag as to what might happen in the future if no significant actions are taken to initiate dramatic change in the Gaza Strip.

Extensive unemployment and a general state of despair could lead to pandemonium and the strengthening of those extremist organizations that Israel fears even more than Hamas. We saw an example of this on Dec. 24, in the first serious incident in Gaza since Operation Protective Edge, when an Israeli soldier was wounded by Palestinian sniper fire. This came in addition to what the IDF calls “a dribble of mortar and Qassam fire” over the last two weeks from fringe organizations apparently attempting to challenge Hamas. However, the problem is not these small organizations; the real problem is the general state of despair caused by the collapse of the Gaza Strip.

It is now clear even to those in Israel who supported the military operations and the reoccupation of Gaza that another military operation with more casualties and more devastation will not result in anything. That will not stop the Qassam and other rockets from being fired. Today more than ever, Gazans feel that they really have nothing to lose.

During Operation Protective Edge, Israel had an opportunity to overthrow the Hamas regime and be rid of its leaders once and for all. It might even have been able to create a situation in which an alternative leadership might have emerged, whether from among the associates of Palestinian President Mahmoud Abbas or some other source. However, the security assessment that steered Israel’s decision-makers was that groups more radical than Hamas would seize control of Gaza, forcing Israel to remain there and occupy it for years. Instead, as everyone knows, Israel chose a different course. It decided to attack Gaza and strike at Hamas until it learned its lesson.

Yet, despite all the blows that it suffered, Hamas continues to cling to power. Its hegemony over Gaza remains unchallenged. Nor is there anything that might cause the movement’s leadership to relinquish control of the Gaza Strip, even if unemployment there reached 90-100%, and people were really dying in the streets from hunger. If UNRWA had not been operating as the major source of food and supplies in Gaza, stretching its budget to the limit and doing everything it could to feed most of the local population, a humanitarian catastrophe would have occurred long ago.

A decision must be made now, concerning the direction that Israel will take from here on. Israel is in the middle of an election campaign, which means that right now no one in the political system has any interest in or desire to deal with Gaza, and certainly not to lift or ease its closure. But the 2½ months between now and the elections on March 17 and the few months it will take to cobble together a new government are a long time. The implications of waiting before acting could be so severe that they may well be irreversible.

The rebuilding of Gaza is occurring at a snail’s pace — at the current rate, it could take a decade. It does not take a particularly rich imagination to guess what might happen there a year from now, and how Israel will be dragged into another unnecessary armed conflict.

On Dec. 22, the Coordinator of Government Activities in the Territories announced that its chief coordinator, Maj. Gen. Yoav (Poli) Mordechai, approved the construction of a Coca-Cola factory in Gaza. The entrepreneurs behind the factory, Munib al-Masri and Zahi Khouri, are investing some $20 million in the construction of the factory, which will be built in the Karni industrial zone over the next three years. The factory promises to employ over 1,000 workers.

When I told my friends in the Gaza Strip about the planned project, all they could do was laugh bitterly in response. They told me the carbonated American soft drink does not have what it takes to “add life” to them. To really “add life” to Gaza and save its people from a dire fate, it would take a much larger and more concerted international effort that would ensure employment for the hundreds of thousands of unemployed. One drop of Coca Cola in Gaza’s bitter sea will do nothing to change the situation there.