Israel must help Gazans, regardless of Hamas

Israel must consider unilaterally lifting the Gaza blockade because desperate Palestinians there have nothing to lose, a situation far more dangerous for Israel than Hamas rearming. 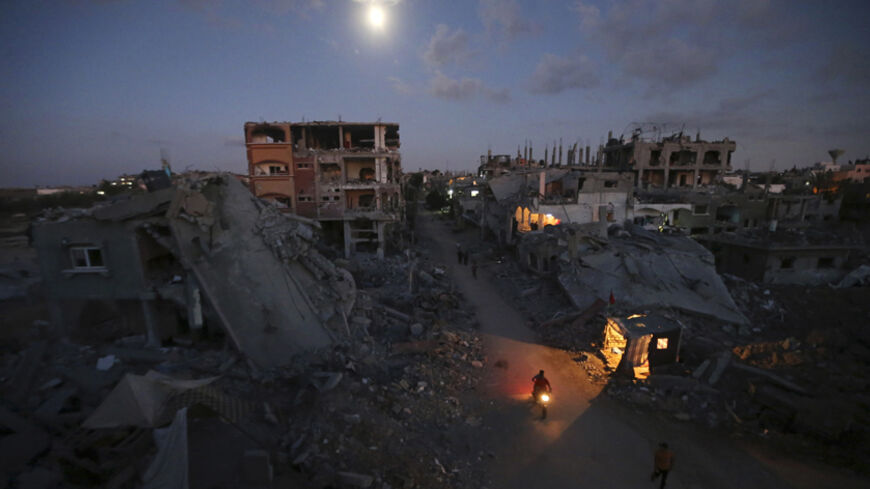 Palestinian pedestrians and a motorcyclist commute along a road between ruins of houses damaged or destroyed during the Israeli offensive, in Beit Hanoun, Gaza Strip, Sept. 7, 2014. - REUTERS/Mohammed Salem

I have a good friend in Gaza, journalist Mouein al-Hilo. During the many years we worked together, he exhibited interest in what took place in Israel, and I was attentive to the goings-on in the Gaza Strip. In recent years, we have been able to talk only by phone, and each time our conversations have become sadder, more frustrating. He would worriedly tell me about his deteriorating financial status, but then always try to muster a glimmer of hope and end the conversation with the same words, “It’ll be OK.” Sometimes he would add, “It won't happen unless we believe in it and have hope.”

We talked again Sept. 17. Hilo spoke about his life and his family situation after Operation Protective Edge, telling me that his savings had completely run out. This time he didn't sign off with his usual mantra, “It’ll be OK.”

“If we don’t witness a change for the good in our lives over the next few weeks, another war will erupt soon,” Hilo firmly pronounced. “It’s impossible to live this way any longer. We have nothing to lose any more. People hoped that after the war, something would happen. We’d feel change in the offing, we’d finally breathe, but nothing has changed.”

According to my friend, this is the overall perception shared by the majority, if not all, of Gaza's residents. Desperate and hopeless.

Hamas and Israel reached understandings Sept. 16 regarding a reconstruction mechanism for Gaza. This only relates, however, to the transfer of equipment and building materials for restoring the ruins of the war. Almost a month has passed since the end of the Israeli operation in Gaza, and tens of thousands of Palestinians who lost their homes have hunkered down in UNRWA-run schools and other public institutions. The homes of these people were completely destroyed or damaged so severely that they are uninhabitable.

Even if Israel were to transfer all the necessary building materials to Gaza without delay, reconstruction would take many months. Gaza’s problems are not limited to a shortage of construction materials. The closure, which Gaza's residents had hoped would be lifted, still continues, aside from the easing of a few restrictions. As of now, the conflict between Hamas and Fatah remains as it was, and the mechanism that should enable Palestinian President Mahmoud Abbas' forces to enter through the Rafah crossing has yet to be defined.

Agreements on expanding the zone for fishing off Gaza's shore have also not been realized. According to the cease-fire agreement between Israel and Hamas, the zone permitted for fishing is supposed to be increased from three to six miles, but Gaza fishermen claim that when they exceed the four-mile range from shore, Israeli naval boats fire warning shots at them. Thus, they are forced to turn back toward the narrow coastline, where fishing prospects are limited.

Enlarging the fishing zone is of great importance to Gaza residents. Under conditions of limited survival, the sea has become their main source of livelihood. Gaza's dying economy took a serious blow during Operation Protective Edge. Scores of factories that employed thousands of laborers were completely destroyed. Hundreds of small businesses collapsed.

The unemployment rate in Gaza rose significantly, and according to unofficial estimates, 50% of residents, or more, are jobless. Three professions have remained relatively stable in terms of employment opportunities: fishing, journalism and enlisting in Hamas' security and police apparatuses. Even those wage earners fortunate enough to have work, such as my friend Mouein, find it hard to make a decent living. They worry about tomorrow.

During Operation Protective Edge, Israel justifiably insisted on not handing Hamas any diplomatic accomplishments. Prime Minister Benjamin Netanyahu claimed after the cease-fire announcement that Hamas had taken a severe beating and, in effect, had gained nothing. According to reports and testimonies from Gaza, it appears that Netanyahu was right. Now, however, with the operation over, it is time to turn our attention to the life and reality currently facing Gaza residents, to their future and to removing incentives for the next war.

The continuation of the blockade is a major threat to Israel’s security, because it goads all of Gaza’s desperate residents toward preparing for a no-choice war. This is why Israel must act wisely regarding measures to ease the situation there. If not for humanitarian reasons, Israel should at least understand and act according to its strategic interest.

Israel is in the midst of a dilemma. If the blockade is removed, Hamas will become stronger and might exploit arriving raw materials and open crossings for rearming and retrenchment. On the other hand, the blockade cannot continue indefinitely. A desperate population that has little to lose is much more dangerous than Hamas' rearmament.

Since Israel made a deliberate decision not to bring down Hamas' regime in Gaza, instead accepting its existence as Gaza’s ruler, Israel must now decide that a continuation of the blockade is no longer in its security interest. Thus, Israel should act, even unilaterally, to lift it (of course, with reasonable safeguards and limitations).

Most of Gaza’s residents are aware of the tragic fact that despite the heavy price they have paid, the war did not improve their situation. Therefore, Israel's desire to prove to Hamas that it achieved nothing is no longer relevant and is even dangerous.

There are many goodwill gestures that Israel could make toward Gaza residents, gestures that would not necessarily be viewed as an achievement for Hamas. For example, it could speed up rebuilding of the power station that Israel destroyed in the fighting. The plant has been a favored target. The Israel Defense Forces have struck it three times: after the abduction of soldier Gilad Shalit (2006); during Operation Cast Lead (2008); and during Operation Protective Edge (2014). Once again, it has been proved that blowing up the power station does not create deterrence, but only a headache the day after the war ends. Until electricity is fully restored, life in Gaza cannot get back on track, and its businesses and factories cannot be rebuilt.

In conclusion, Israel must now initiate a well thought out lifting of the blockade. This is not because of the cease-fire understandings, but understanding that it will prevent the next war.