The decision to forbid local reporters in Gaza from working for Israeli media outlets will only deepen the sense of estrangement and alienation between Israelis and Palestinians, writes Shlomi Eldar. 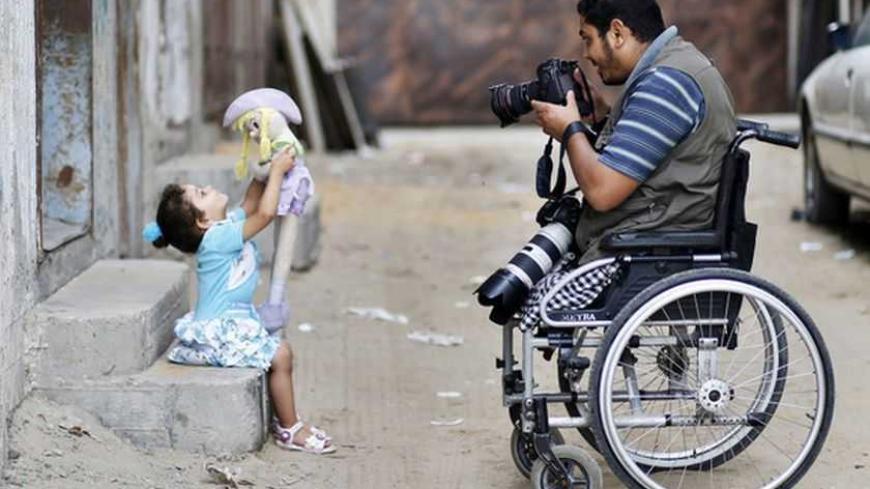 The most irritating thing about the Hamas government’s decision to ban Palestinian journalists in Gaza from working for Israeli media outlets is what the decision implies: The journalists have been turned into collaborators, at least from the perspective of the Palestinian public.

They’re called “stringers” in the professional jargon. In fact, they are professional journalists who work part-time reporting from “the inside” for some external media outlet. What they most frequently provide is first-person coverage about events taking place around them. They have proven themselves to be indispensable, especially in situations when there is no possibility of outside journalists entering the region, just as it is the case in Gaza. In those circumstances, they become the lone voice able to tell the real story of what is happening there.

In an interview with Al-Monitor’s reporter in Gaza, Rami Almeghari, the head of the Hamas press office Ihab al-Ghosain explained the decision by insinuating that the articles published by those journalists were used by Israeli intelligence.

In all honesty, I know nothing about the quality or quantity of information that Israeli intelligence could derive from those journalists. I do, however, have a strong feeling that “Israeli intelligence” has a serious problem if it is dependent on their reports. The reason is simple. The actual number of such reports is miniscule. For the most part, the Israeli media lost interest in Gaza and its people. Israelis tend to be indifferent, turning their attention to Gaza only in the midst of some military operation or other, like the one that occurred there last month. Any empathy Israelis might have felt toward the residents of Gaza has long since disappeared. For many Israelis, the land beyond the Erez Checkpoint and border crossing, just a 50-minute drive from Tel Aviv, is considered to be “Hamastan,” (Hamas land) far beyond the Ridge of Darkness.

Nevertheless, a handful of Israeli media outlets deemed it necessary for professional and journalistic reasons to employ “stringers” in the Gaza Strip to submit reports from the inside, mostly features. And just who are those people who tell their story from the inside?

One of them is Abeer Ayoub, who has been writing for Haaretz for the past few months. In an interview with Al-Monitor she said, “I have always focused on human-interest stories from Gaza and the newspaper would accept and publish them. I do not see that such a decision by the government is helpful.” She went on to say that she told the Hamas authorities in Gaza that such a blanket ban would in no way prevent Israeli media outlets from publishing news items about Gaza. The big difference, she pointed out, was that without these stringers, “we, Palestinians, will lose the chance to voice our Palestinian story to the Israeli public.”

Another journalist who reported regularly from Gaza was Sami al-Ajrami, formerly a reporter for Channel 2 and more recently a reporter for Maariv. His nine-year-old daughter, Bisan, was injured during Operation Pillar of Defense while playing in the courtyard of her home with her twin sister, Ruba. Three of her fingers were cut off by shrapnel during an IDF attack on a squad firing rockets into Israel. At that very moment, her father was actually covering the funeral of Ahmed Jabari for Israel’s Channel 2 News. Jabari was assassinated in the first half hour of the military operation [ Nov. 14].

The third journalist working in Gaza, producer Mouein al-Hilo, was someone that I brought to Channel 10 News about five years ago, in the wake of the Hamas coup, right after the IDF banned Israeli reporters from entering the Gaza Strip. Suddenly al-Hilo, and other “stringers” like him, had become indispensable. They were now our eyes and ears in Gaza.

I first met Mouein al-Hilo almost 10 years ago, while covering a story in Gaza. His brother Nahed’s home was hit by an Israeli mortar shell during a military operation to destroy metal workshops suspected of being used to manufacture Qassam rockets. Two of Mouein’s nephews, the sons of his brother Nahed, were killed. One of those casualties, Said al-Hilo, was a soccer player, who was once a member of the Palestinian team that played a friendly match in Norway against an Israeli team. Then the Second Intifada erupted, and the hope for peace that permeated the region was stopped dead in its tracks.

Nahed, the grieving father, pointed to a second-story window that had survived the blast. His two granddaughters, Said’s children, were peeking out from behind its half-open blinds.

“So tell me,” he asked, tears streaming down his face, “who will take care of them now? Who? Their father was killed, and after working in Israel for 35 years, I can’t provide for them anymore. Now that you’ve killed my sons, I can’t work for you either.” Nahed was referring to the regulation that the work permit of any Palestinian who had a family member injured or killed was to be revoked; the security forces considered that person to have a motive for revenge.

As if to confirm this, Nahed suddenly let out a blood-curling scream: “I’ll commit the next terrorist attack in Israel!” A long, heavy silence followed. Only after he noticed my stunned expression did he try to calm me down. “I have lots of friends in Tel Aviv. Lots. Who would I attack? My own friends?”

Mouein and I have since become friends. After the Hamas coup, we began to collaborate professionally as well. He filmed news items and stories from the Gaza Strip, which I worked on from the editing suite in Tel Aviv, adding narration and preparing them for broadcast. It was a classic example of journalistic cooperation. We tried to provide the television audience in Israel with a window into the situation faced by Gaza’s residents. It was an image that many Israelis preferred not to see, especially since Hamas seized power. It showed the distress they experienced on a day-to-day basis, unemployment, and their efforts to find viable solutions that would allow them to survive, when there was no petrol, no electricity, and no hope.

And yet, as hard as I try, I can’t remember a single report that anyone could have used to obtain“intelligence.”

By the way, at that very time, Hamas and even more militant organizations like Islamic Jihad and the Resistance Committees recognized the importance of Israeli public opinion. Moreover, many activists serving time in Israeli prisons watched Israeli television stations no less than Israelis themselves did. More than once I heard that many of those prisoners, who have since been released and now speak a good Hebrew, still prefer to watch Israeli broadcasts, instead of Al Jazeera or Al Arabiya.

Actually, Ihab al-Ghosain himself, the head of the Hamas press office who is so worried about “classified intelligence” being leaked, was interviewed by the Israeli media on numerous occasions. He even allowed Mouein and me almost free reign to film in Gaza, so that we could bring those images to an indifferent Israeli public.

And so, every so often we were able to breach that wall of apathy. The report that I remember most of all was about the al-Jerushi family, all of whose children came down with a lethal skin disease, which caused two of them to die a horrible death. As a result of that report, two other children, a one-year-old infant and a six-year-old girl, were brought to Ichilov Hospital in Tel Aviv, where they received treatment that saved their lives. An Israeli businessman covered the cost of the treatment, while dozens and perhaps hundreds of Israelis showed up at the hospital to donate money, food, and toys to those ailing children.

In the five-and-a-half years that we worked together, Mouein and I tried to present the Israeli public with a different perspective on Gaza than the one that was so familiar to them. It was important for us to show that there are people there who simply want to live their lives in peace, to eat well, earn a living, and provide a good education to their children, just like we do. We tried to show our Israeli audience that not everyone there hates us.

But now, in a rash decision, Hamas has imposed a media blackout — an iron curtain of sorts — across the Gaza Strip. From now on, Gaza will no longer be some spot on the map, just 50 minutes from Tel Aviv. From now on, it will be light years away.